The Status Civilization by Robert Sheckley 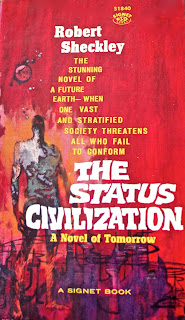 The Status Civilization, Robert Sheckley, Signet S1840, 1960, cover by Richard Powers.                                                                                                                                I have decided to make a concerted effort to read some authors from the 1960's and 1970's which I had previously neglected for no good reason. This impulse has been strengthened by following Joachim Boaz's wonderful blog, Science Fiction and Other Suspect Ruminations which has covered a number of intriguing titles and authors from this period. I have to admit the wonderful Richard Powers cover made my first choice easy. The novel starts when the protagonist, Will Barrent wakes up on a space ship with no memory of his previous life. Upon landing he finds out he is a convicted murderer sentenced to the prison planet Omega. He also learns that the life expectancy of a new prisoner is 3 years and that once on the planet the society is run entirely by the prisoners with no intervention by the guards or earth authorities. On Omega Barrent finds a highly stratified society where murder is a perfectly legitimate method of raising one's status. And so he begins to rise in Omega society assisted on occasion by a mysterious young lady who provides both weapons and information that help Barrent survive. Omega does have laws, but these are not shared with new arrivals who must learn them by trial and error if they can live long enough. Thus Barrent is launched into a series gunfights and gladiatorial contests in an attempt to stay alive and learn how Omega society functions. Barrent also realizes that he has no affinity for criminality and murder despite his obvious success in these areas. I really enjoyed this novel, Sheckley has a reputation as a satirist and humorist, writing styles that do not normally attract me. The creation of a crime based society leading to the inversion of "normal" societal values offers many opportunities for satire and parody, for example at one point Barrent is brought before the Kangaroo Court for the crimes of non-drug addiction and religious impiety. However in this novel I think Sheckley avoids going overboard, instead he tempers comedic elements by presenting an interesting plot and characters. The reader can focus on the events that shape Barrent's actions as he attempts to navigate the complexity of Omega society and the conflicts that arise from his own memory loss. For as he begins to talk to other prisoners he realizes that none of them can agree even on the most basic facts about the Earth, the planet they have left behind.

In the Status Civilization, Sheckley has taken a fairly hoary sf trope, the prison planet and elevated it to a higher level. He fits a lot into a slender 127 page novel. There is a great deal of action but also a great deal of mystery adding to the suspense. The new prisoners have to deal not only with their own memory lost, but also the veiled nature of Omega society and their lack of agreement of the nature of the society and planet that has sentenced them to Omega in the first place. 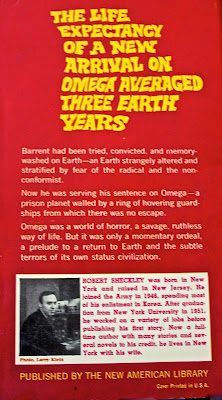 The elevation on this novel over the normal prison planet novel occurs when Barrent escapes and Sheckley shifts the focus from Omega to Earth.  By this point I had began to ask myself questions about the organization of Earth's judicial system and Earth society as a whole. It is a tribute to Sheckley's skill in plotting this novel that he avoids the all too common info-dump to answer these questions. Instead Barrent assumes the role of Opinioner (a type of government researcher or census taker) which allows him to delve into the layers of Earth society by interviewing citizens and then follow the various threads these interviews reveal. The novel's conclusion is satisfying in part because, like real life there are still questions and challenges ahead and Sheckley has avoided a tripe and predictable denouncement with everything neatly resolved.