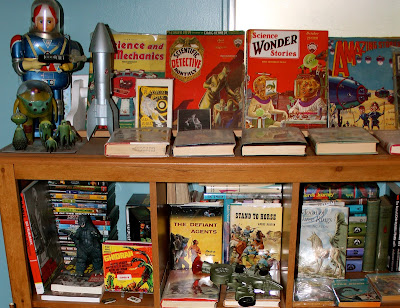 I had thought I would have lots of time to post to my various SF blogs while at the cabin. However I have posted mainly to my nature photo blog "That's Just the Wild Wood". While I collect my thoughts on Herbert's Hellstrom's Hive, I thought I would share this link a friend sent me to the work of Shigeru Komatsuzaki on Pink Tentacle. I enjoy this sort of Popular Mechanics, Air Wonder Stories, Frank Paul style illustration updated for the 1960's. I love the fact that it includes the rocket ships from Gerry and Sylvia Anderson's Thunderbirds, one of several SF series they did using Supermarionation, certainly one of the stranger SF entertainment offering of my childhood. I have to admit I did buy the first diecast Thunderbird 2 I saw, what fun is adulthood if we cannot buy the treasures we could not afford as kids.