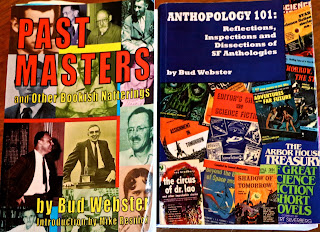 This summer I was at the cabin which meant I did not post as much as I had planned. It also meant that I did not order lots of books from ABE because I did not have room to bring them back what with our tools, my wife's telescope and 3 dogs. There was also the possibility of a postal strike which curbed my enthusiasm. So I did something almost as fun, agonized endlessly about my first order. When these obstacles were out of the way, I was interested in four volumes of Ballantine's six volume series by William Tenn, published in 1968.

For lovely photos of all six volumes see the great SF blog unsubscrbedblog.

Another potential purchase was the first five volumes of the Alpha anthologies edited by Silverberg, Bud Webster has been my go to authority on anthologies since I first stumbled across his essays on the web (link below) so I did some googling.

It was then I learned that Bud had passed away in Feb. 2016. Bud was not much older than I am and one thing that had attracted me to his essays on anthologies and important
SF authors was that many were books and writers important to me in my youth. The portrait he painted of himself as a bookish boy disinterested in sports who saw the library as a safe and welcoming place and SF as it's greatest attraction was also familiar to me.

I have have read, bought and accumulated SF most of my life, but my focus has changed over the years. I collected small press but they got expensive, pulps largely for the covers but I have run out of room to display them and I will not buy them to keep them in boxes. A number of the blogs I currently follow focus on 1960's and 1970's SF and I have been using them to point me to authors and works I have missed.

However my first love was always the Sf short story, thanks Ray, so Bud was a revelation. All the information I could possibly want on anthology series in one place. I started with
the bricks (heavy books) as he described them Adventures in Time and Space by by Healy & McComas and many of Groff Conklin's including the enormous hardcovers The Best of Science
Fiction, The Big Book of Science Fiction, The Treasury of Science Fiction, Omnibus of Science Fiction. while I my wife and I had some anthologies especially Wollheim' Best of anthologies, many edited by Bleiler, Dikty, Merril, Pohl, Silverberg, Knight, Carr, Aldiss Harrison, Carnell etc. have followed. To avoid wallowing in nostalgia I have collected current best of series by editors like Gardner Dozois and the late David Hartwell as well.

I did buy the Alpha as for the Tenn's, well lets ask Bud.

"Not that it matters, really, since I was an ardent fan of William Tenn from whenever I first ran across him. I recall clearly the plans I had for my weekly pay when I was sixteen and delivering papers in the hills around Roanoke. I had a long list of albums (Mothers of Invention, Electric Prunes, Yardbirds and other soft-rock hits) and books I wanted to buy, and among them was the lovely little matched six-volume set of William Tenn stories that Ballantine brought out in 1968. I had to get them one at a time, as they came out, but I was proud of that little row of books and I showed them off to my other sf-reading friends."

from Past Masters, In a Klass By Himself (or, Tops On a Scale of One to Tenn) 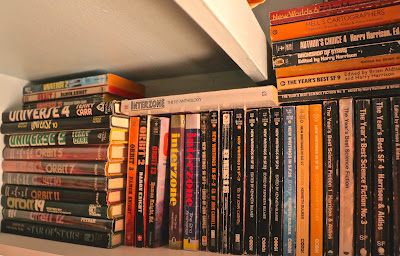 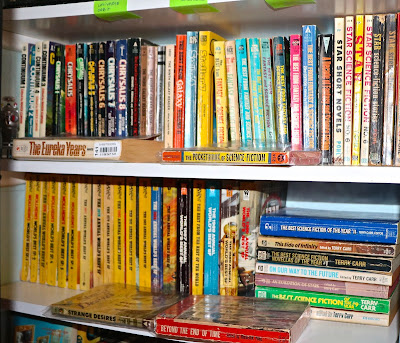 More information and links on Bud Webster follow and you will read more about Bud's influence and the anthologies he lead me to in future posts.

"Bud Webster lived surrounded by more than 10,000 books, from ratty, dog-eared paperbacks to rare, signed first editions. There were books in every room except the smallest ones, and occasionally (like Scrooge McDuck) he liked to gather them all in a pile in the middle of the floor, toss them up in the air, and let them come down and hit him on the head. A columnist for the SFWA Bulletin and frequent contributor to the "Curiosities" page of F&SF, he was the author of 41 Above the Rest: An Index and Checklist for the Anthologies of Groff Conklin, the definitive bio-bibliography on the subject, as well as The Joy of Booking: Webster's Guide to Buying and Selling Used SF and Fantasy Books. He also wrote fiction, but not nearly often enough to suit Mary, his Significant Other. He lived in Richmond, Virginia, with the long-suffering Mary and three damn cats."

This links also provides links to pdf's of many of his columns.

For more information on Bud Webster the following link is also useful.