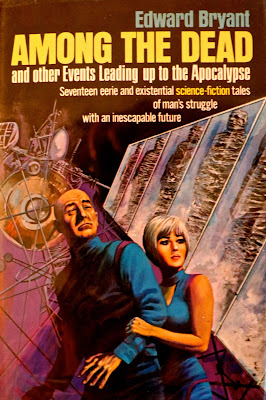 Among the Dead and other Events Leading up to the Apocalypse, Seventeen eerie and existential science-fiction tales of man’s struggle with an inescapable future. By Edward Bryant, 1973, MacMillian, cover by Gray Morrow.

Today I am going to do something a bit different which is post on a collection of short stories rather than a novel. First I will give my impressions of the entire volume and then look at some of the stories in more detail. I guess the stories in any volume mentioning the apocalypse would not be cheery and here Bryant does not disappoint. I have never read anything by Bryant before so I am not sure if these stories are typical of his output or if they unusually dark because of the theme of the collection. The stories also raise a couple of other issues that I often ponder. I am always interested in how porous the boundaries between genre fiction is so that SF often is heavily influenced by mysteries, Asimov’s Caves of Steel/Naked Sun come to mind or for horror George R.R. Martin’s Nightflyer is a great example. In this collection I do see a strong horror element in many of the stories. Also I often wonder what constitutes SF, this something I still do not have a concise answer for. I think it is very different things to different people and certainly some of the stories in this collection raised that in my mind. I did expect from the subtitle that these stores might share some progression or continuity but that is not the case. While most point to some kind of societal disruption it can be overpopulation, nuclear attack, terrorism, biological weapons, class warfare or some kind of creeping ennui as far as I can determine. The stores are more closely tied together by characters infected with a certain world weariness, impotence, ineffectualness, or sexual disfunction. Victimization is a theme that seems to run though may of the stories. We can also throw in hints of bestiality, torture tales and some cannibalism so yes they are dark. For me some of the most successful stores were those that hewed most closely to some more predictable SF trope. This is a personal preference not necessarily a fault of the author. I did notice that I often liked the longer rather than the shorter stories in the collection. It seemed the added length allowed for more character development or a more clearly defined plot. Some stories were so short, the theme or plot so poorly developed that they did not hold my interest. Often when I read SF I consider the plot or characters in terms of other SF I have read and I will continue this here. I am only going to discuss selected stores to be quite honest some I did not like others I simply did not see much of a point to and did not feel like rereading. However since I did typify this as a journey I am going to try to read books and authors that challenge me.

Shark: This is the only story in the collection I can say I really enjoyed. Marcus Antonius Folger is an oceanographer formally of the Marine Institute on East Falkland who has spent the last decade in a village on small island in the south Atlantic. During the war he was part of as project to weaponize sharks and killer whales using human volunteers. Now he lives quietly on the island occasionally helping the islanders with war “relics” until representatives of the Protectorate of  North America come to recruit him for an unnamed project. The SF element seemed a bit weak but the backstory and the island setting were defined enough to make the story work for me.

Adrift on the Freeway: Richard Forrester is an professor at Kenner State College and logical successor to the current head of the English department. On a driving trip to a conference with a colleague they speculate on the growing phenomena of cars abandoned on the freeway with not trace of the occupants. He also indicates his unhappiness with his career in such a provincial backward college and community. This story seemed more closely related to the meditations or fabulations of Ray Bradbury’s later stories than typical SF story.

Jody after the War: A somber look at love after a nuclear war. Dated a bit by having one character work as phone booth repair man.

The Poet in the Hologram in the Middle of Prime Time: Ransom an unsuccessful poet has become increasingly unhappy with his paying job writing scripts for Unicorp the North American leader in holovision programming. But his frustration boils over when the network Director General Amelia Marchin indicates that new technology will allow viewers to participate in the actual scripts using subliminal cues and that feedback circuits will allow viewers to direct the action and alter the program as they desire. Here we have the parlour walls of Bradbury’s Fahrenheit 451 taken to their logic conclusion creating a technology close to the virtual reality of our cyberpunk future.

The Human Side of the Village Monster: Terri and Peter live in a dystopic New York reminiscent of the darker visions of the late works of John Brunner. Attempts at population/social engineering have created widespread crime, food shortages and the necessity of carrying respirators when venturing outside while going to get Terri’s contraceptive medication. Their lives are further disrupted when they invited to dinner by a neighbour. This story has more of a SF gimmick story feel in the final denouement but I am not sure this fits with the rest of the story.

Among the Dead: A somewhat grisly take on the last 2 men and 1 woman in the world story.

I deliberately did not research Bryant before reading this collection. I see he has won 2 Nebula awards for short stories, they do not appear in this collection, and that he has a slew of award nominations. In the entry in The New Encyclopedia of Science Fiction edited by James Gunn the entry notes that many readers have questioned whether Bryant’s stories like “Shark” are SF the entry goes on to note that “Indeed most of Bryant’s stories are obviously science fictional, but he presents them as fables rather than stories of credible, detailed worlds.” It also states “His well written and stylish short stories deal with tense social and psychological issues.” While I cannot dispute the latter I did not find most of the stories in this collection either well written or stylish. This indeed was a problem for me, I feel that short stories should be richer more evocative than a novel with strong imagery and a well invoked setting or characters they should not be as discursive or confused as I found some of these stories to be. Based on the industry response to his stories it is obvious that Bryant is considered a very good short story writer and it seems that Bryant’s themes and writing style simply do not resonate with me.

I did like the quote from Dante in one story;

Email ThisBlogThis!Share to TwitterShare to FacebookShare to Pinterest
Labels: Among the Dead, apocalyptic, Edward Bryant, Year; 1973