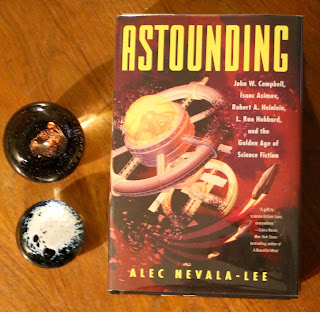 As I mentioned in my last post I am currently reading Astounding, Alec Nevada-Lee's book on John W. Campbell and some of the writers most associated with Astounding, Isaac Asimov,  Robert A, Heinlein, and L. Ron. Hubbard. When I read any books on the history of science fiction I make note of works it mentions and often I look to see if I have copies in my collection. Once I begin scanning shelves and pulling things out, other items also catch my eye and soon I am holding/reading something totally unrelated to my initial query. In this case it was a small collection of of anthologies entitled Stellar, edited by Judy-Lynn del Rey. Once there I had to at least thumb through one of my favourite stories in the collection, "Custom Fitting' by James White. I then scanned the TOC and noticed " The Bicentennial Man" by Isaac Asimov. Since I could not remember reading it, and Asimov obviously figures prominently in Nevada-Lee's book I opened it and began  reading. This demonstrates the somewhat circuitous route my thought processes take and also why it takes me so long to finish a book like Astounding. 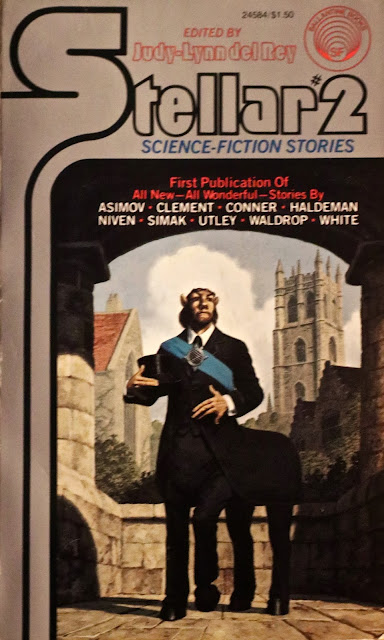 "Custom Fitting" by James White is a charming story of Earth's first contact with a vast intergalactic federation. The protagonist George L. Hewlitt is a old fashioned tailor who lives above his shop in London with his crippled wife, referred to as Mrs. Hewlitt.

Hewlitt " used to read a lot of science fiction, before it became to soft-centered" (13), which is good because Mr and Mrs. Hewlitt are about to receive a very unusual commission.


"The little Tailor--this is an omnibus tot all stories about the little guy who becomes a big shot, or vice versa. The mg is from the fairy story. Examples: "Dick Whittington," all of the Alger books, Little Caesar, Galactic Patrol (but not Grey Lensrnan), Mein Kampf, David in the Old Testament. It is the success story or, in reverse, the story of tragic failure. "

"On The Writing Of Speculative Fiction," by Robert A. Heinlein.

I enjoyed "Custom Fitting", it was a slight but imaginative tale. White's depiction of Mrs. Hewlitt could have been a bit more well rounded and generous, but White is the same author who never allowed human females to rise to the rank of doctors in his Sector General novels.
________________________________

" The Bicentennial Man" by Isaac Asimov is the story of Andrew, a robot belonging to the wealthy Martin family. Andrew seems typical of the robots turned out by U.S. Robotics and Mechanical Men, until Little Miss, the youngest of the Martin children, jealous of a pendant her older sister has received from a suitor asks Andrew to carve her one. He does and this makes it clear to everyone that there is something very different about Andrew's positronic brain. He still adheres to the three laws controlling robots but Andrew is anything but ordinary.

As I read this story I was really struck by similarities to Clifford Simak's All the Traps of Earth the first work I discussed in this blog. It tells the story of Richard Daniel, the 600 year old robot servitor of the Barrington family.

In both stories Simak and Asimov have presented their robot protagonists as humanoid vanity objects serving the function of domestic servants rather than the industrial robots we see today.

Both robots serve multiple generations of the same family and both families are wealthy and politically powerful.

Both robots exist long after the average robotic life span or even legal regulations controlling robots.

Both stories could be considered non-traditional takes on coming of age stories. 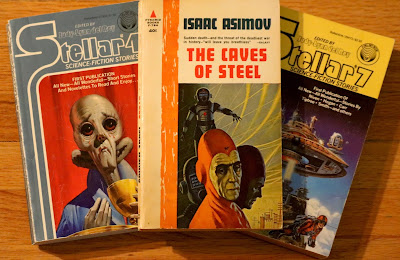 Asimov's Andrew remains largely on earth, interacting with the family, U.S. Robotics and Earth society in general. The concerns of the story are cultural and legal, dealing with the position of robots within the larger society. If one positions this story within the larger body of Asimov's works it takes place centuries before the events of The Caves of Steel when robots are despised by the majority of Earth society.

Simak's Richard Daniel interacts with people as little as possible and abandons Earth for a spiritual odyssey across the galaxy developing strange powers along the way. Humans play almost no part in the story.

The Encyclopedia of Science fiction states "The Bicentennial Man" (in Stellar #2, anth 1976, ed Judy-Lynn del Rey) was his finest single Robot tale and won both a Hugo and a Nebula.

I have to agree, most of the robot stories that Asimov published early in his career, with the exception of those dealing with R. Daneel Olivaw, The Caves of Steel and The Naked Sun are puzzle stories typical of early science fiction. The author presents a puzzle (in this case odd behaviour by a robot) that the protagonist must resolve. In "The Bicentennial Man" Asimov looks at the ramifications of Andrews actions in more detail, the effect they have on the people who encounter him and society as a whole. The story is longer and more fleshed out, the characters and scenes somewhat more developed. In the end, it turns out that there is no puzzle to be solved at the heart of the story, rather it is an account of a life and the people it touches.
Posted by Guy at 10:35 AM