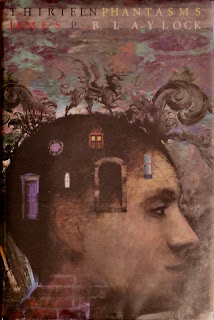 Last week I was sitting in my room surrounded by my science fiction collection, wondering what to suggest to Doug as part of our reading project. Doug's taste sometimes differs from mine, as one would expect, but I have made some fairly accurate guesses in the past. A James Blaylock short story sprang to mind. I knew it involved the discovery of a collection of science fiction magazines. A quick search and I had not just the title "Thirteen Phantasms" but a link to its appearance in Omni.

My wife and I are huge fans of the work of James Blaylock and Tim Powers. They are close friends and coauthor stories and share characters like the poet William Ashbless. They appear side by side in John Clute's Science Fiction The Illustrated Encyclopedia. Clute says, " Some think Blaylock has only a remote connection with SF, and should be treated as a weaver of misty myths for New Age readers who like their truths soft, their music ethereal, and their sewage plants on the other side of the tracks. Others think he has a real science fiction understanding of the world. " (203) I would suggest his work comes out the Weird Tales tradition of science fiction that also nurtured writers like C.L. Moore, Ray Bradbury and Fritz Lieber.

While I had the story in hardcover, I initially read the Omni version. As followers of this blog might guess, the illustration by Robert K. J. Killheffer also enthralled me. 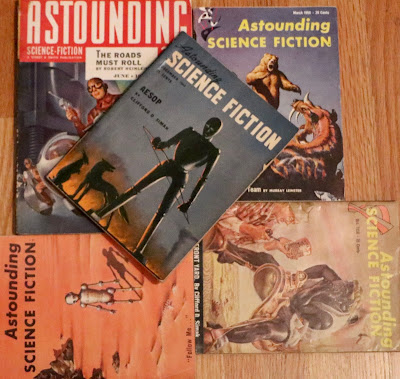 "Thirteen Phantasms" alternates storylines — the first concerns the main character Landers who is living in a rented house in Southern California. He mentions a wife, Janet, who is no present. I assume she has died. Blaylock's characters often seem to single widowers, which infuses the story with a certain melancholy or bachelors. Either way, this allows them to indulge their pension for kaleidoscopes, stuffed axolotl and spontaneous road trips. He seems to be at loose ends; he does not, for example, seem to work. While speaking to his landlady, he learns that her late husband kept a collection of magazines in the attic. " against the north wall, lay four dust-covered cardboard cartons — full of “junk magazines,” or so Mrs. Cummings herself had told Landers this morning. "The cartons were tied with twine, pulled tight and knotted, all the cartons the same. The word Astounding was written on the side with a felt marker in neat, draftsmanlike letters. Landers wryly wondered what sort of things Mr. Cummings might have considered astounding, and after a moment he decided that the man had been fortunate to find enough of it in one lifetime to fill four good-sized boxes.

Landers himself had come up empty in that regard, at least lately. For years he’d had a picture in his mind of himself whistling a cheerful out-of-key tune, walking along a country road, his hands in his pockets and with no particular destination, sunlight streaming through the trees and the limitless afternoon stretching toward the horizon. Somehow that picture had lost its focus in the past year or so, and, as with an old friend separated by time and distance, he had nearly given up on seeing it again. "

The first issue Landers pulls out is for Dec. 1947, which features one of Simak's City stories, "Aesop", on the cover. 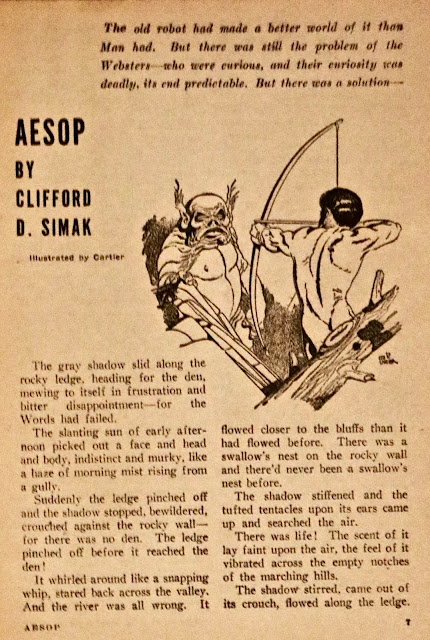 Blaylock alternates Landers' story with that of a group of science fiction fans, the Newtonian Society, living in Glendale Califonia in the late 1940s. Russell Latzarel is the president, and the group meets at the home of Roycroft Squires. Squires is a bookseller and small press publisher, and it is the small press publications that will link the story of Landers with that of the Newtonian Society.

"There were book ads at the back of the magazine, including one from something called the Squires Press: an edition of Clark Ashton Smith’s Thirteen Phantasms, printed with hand-set type in three volumes on Winnebago Eggshell paper and limited to a hundred copies. “Remit one dollar in seven days,” the ad said, “and one dollar monthly until six dollars is paid.”"

These magazines have an almost talismanic effect on Landers. After reading “Rain Check” by Lewis Padgett, he goes to the liquor store for the ingredients for the Highball described in the story. He also indulges in a bit of magic thinking mailing a dollar to Squires Press for a copy of Thirteen Phantasms. Later in the story, he will make the one hour trip to Glendale to visit Squires' former home. 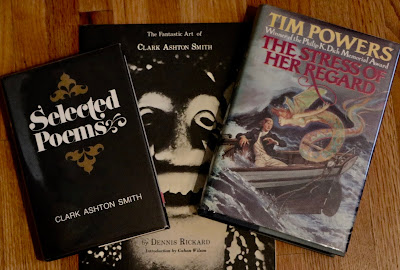 I have attached the link, and I would encourage you to read the story before reading further. Roycroft or Ray A, Squires was an actual fan, bookseller and small press publisher. He was born in 1920 and died in 1988. He was a friend of Ray Bradbury publishing the first edition of Bradbury's story "The Aqueduct" as well as other stories and poems by Bradbury, Fritz Lieber and Clark Ashton Smith. Squires was the literary executor for the estate of Clark Ashton Smith. I think he appears in other stories by Blaylock, but I am my relying on my increasingly faulty memory. I suspect he was a friend of both Blaylock and Powers. The epigraph at the beginning of Power's novel The Stress of Her Regard is from Smith's poem "Sphinx and Medusa". According to ISFDB, this poem only seems to have been published by Squires. While there are lots of Medusa mentioned, I could not find it in Smith's Selected Poems.

On rereading it I enjoyed the story. However, the section dealing with the road trip to Glendale and Landers' attempt to get directions at the convenience store struck me. The passages perfectly capture his unhappiness with his life and a certain disconnect almost paranoia when confronted with life in Southern California at the present day. But for me, rereading the story in 2019 drove home both the power but also the danger of nostalgia. As a fictional character, Landers' longing for, in his mind, a more uncomplicated or more comfortable society inhabited by people he will find congenial is harmless. But Canada is currently undergoing a Federal election and many issues I thought we had resolved, topics like race, the environment, indigenous and LGBT rights and the rights of women are suddenly flash-points. Many people seem attracted by rhetoric about returning Canada to some (non-existent) golden age. It is hard for me to read Blaylock's story and not reflect on this. I would suggest that a careful reader can be aware of potential problems with a work without ignoring its' merit. I also do not think authors of fiction are writing autobiography and their work should not always be read as such. I do participate in the world of today, I vote and support causes, I think, are important. But like Landers I also find a bit of refuge in a room filled with science fiction and weird tales, both old and new, warts and all.

"The Roads Must Roll" by Hubert Rogers

"The Big Front Yard" by Freas

The Stress of Her Regard by James Gurney

The Fantastic Art of Clark Ashton Smith The Mirage Press