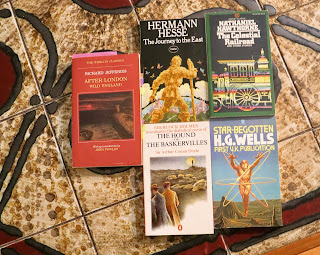 I have been going to a new bookstore in Calgary's Inglewood neighbourhood, Next Page is a branch of the independent bookstore Pages. They sell both new and used books. While the selection of used science fiction is quite limited I have found more than enough to decimate my budget. The books are in beautiful condition with a nice selection of NA and UK publishers and authors. This represents the booty from several visits.

As always I love old science fiction, I am also a bit of an anglophile so Doyle, Well and Jefferies were a welcome find. I am also a big Hesse fan I read them to relax, often skipping here and there. 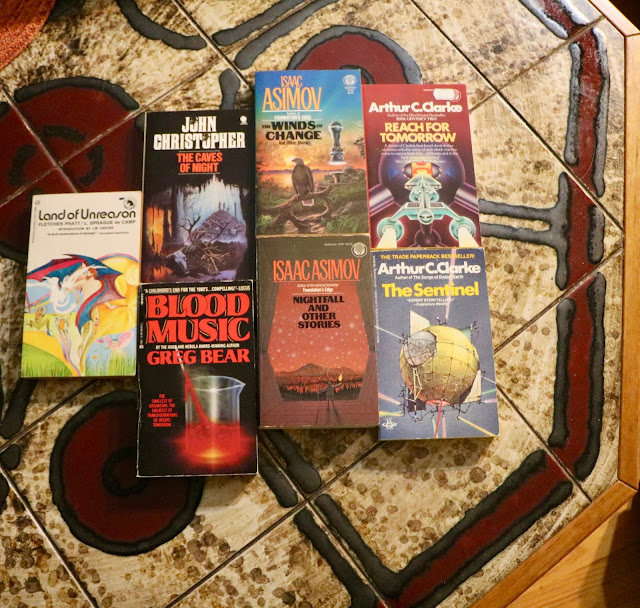 I read Bear's short story "Blood Music", it was quite good. I always wanted to try the novel version. Do I need more Clarke and Asimov, no. Could I resist new editions of their short stories. No, I find it difficult. 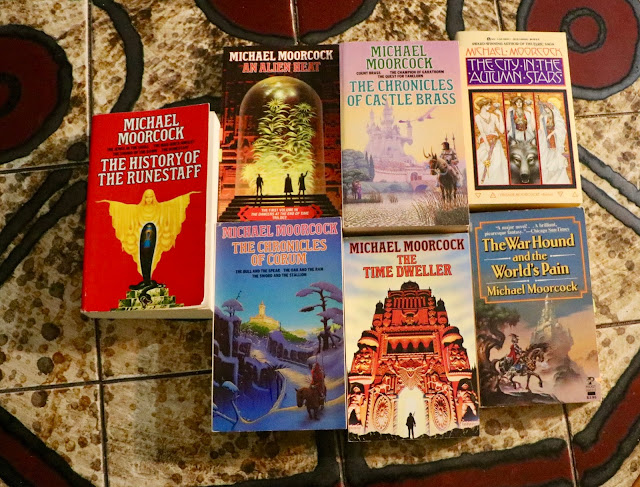 I am familiar with Micheal Moorcock's writing primarily from the various series that form The Eternal Champion multiverse. Initially I did not plan on buying these books. His sword and sorcery novels had been formulaic and I was torn. However I had also read his novella "The Wrecks of Time" in New Worlds and I had purchased Colin Greenland's The Entropy Exhibition on Moorcock's tenure at New Worlds. We were waiting for friends and the longer we waited the more titles I grabbed. I am glad I did. I have actually ordered some of his older works to complete series I already owed.

I am not going to attribute all the covers in this post, You can find this information at the isfdb. I will do this if I deal with a work in greater detail. 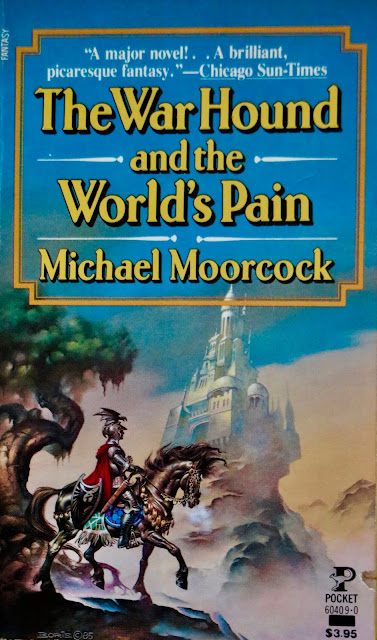 The War Hound and the World's Pain  is set in a fantasy version of the thirty years war. The protagonist, Graf Ulrich von Bek is the commander of a mercenary company that has fought on both sides of the conflict depending on the payoff. He has just deserted his men taking all the units money and food because he sees signs some of the men have contacted the plague. While staying at a manor house he found abandoned, von Beck learns he is damned and his only hope of salvation is to undertake a quest for Satan. What struck me immediately was the similarity to Moorcok's novels set in the far future or totally fictional worlds. Even the atrocities committed are similar to those committed by the soldiers of Granbretan in his Hawkmoon novels. It takes the form of a quest in search of a potentially mythical object. As with most of Moorcock's  protagonists von Bek also acquires a companion on his quest, a religious young Kazak (Cossack) soldier Gregory Sedenko. Neither are nice men von Beck is from a prosperous German family, his sole reason for becoming a mercenary seems to have been the potential excitement. His home was not threatened and he is a best a religious skeptic. He admits several times that he and his men robbed, raped, tortured and murdered the civilian population on either side. At one point he murders a hermit, he claims in part to release a young girl that will not leave the hermit's side even if it means her death. However the true reason is that the hermit annoys him. When Sedenko later rapes the girl, von Beck seem to expect it, and makes no attempt to intervene. These are not Arthurian knights. If anything the Thirty Year's War setting that Moorcock creates is every bit as brutal or more than his totally fictional settings. All Moorcock's heroes are a best problematic. This is very much a fantasy novel that addresses the callousness and brutality of war. As one might expect from a novel set in the Thirty Year's War organized religion does not fare very well either.

The wikipedia entry on Moorcock notes:

"Moorcock's works are noted for their political nature and content. In one interview, he states, "I am an anarchist and a pragmatist. My moral/philosophical position is that of an anarchist."[16] Further, in describing how his writing relates to his political philosophy, Moorcock says, "My books frequently deal with aristocratic heroes, gods and so forth. All of them end on a note which often states quite directly that one should serve neither gods nor masters but become one's own master."{16) "

The fantasy settings that Moorcock creates often include the negative treatment of female characters. This should of course, not be considered a reflection of his beliefs. Moorcock stated in an interview in the Guardian that he fell out with one of his closest friends the writer J.G. Ballard.

"We were estranged for some time because of his treatment of women. I got sick of it."

No stranger to censorship himself the quote below is also interesting.

"Science fiction/fantasy author Michael Moorcock has suggested that the Gor novels should be placed on the top shelves of bookstores, saying, "I’m not for censorship but I am for strategies which marginalize stuff that works to objectify women and suggests women enjoy being beaten."[17]"

https://en.wikipedia.org/wiki/Gor
I found The War Hound and the World's Pain an interesting read. As is often the case with Moorcock there is a sequel, The City In the Autumn Stars, pictured above, which I have not yet read. I am going to be reading more Moorcock for a number of reasons. His work in the field especially with New Worlds make him a influential figure in science fiction. He was prolific which means there are lots of novels and stories to choose from. If like me, you enjoy seeing how an author's themes and plots change over time this can be quite attractive. He crosses genre which I like mixing elements of both science fiction and fantasy in wide ranging works that vary from fairly standard sword and sorcery to the adventure of the hipster Jerry Cornelius. And I have enjoyed his work in the past. What do you think of Moorcock's work.
Posted by Guy at 12:04 PM