The Magazine of Fantasy and Science Fiction, July 1956 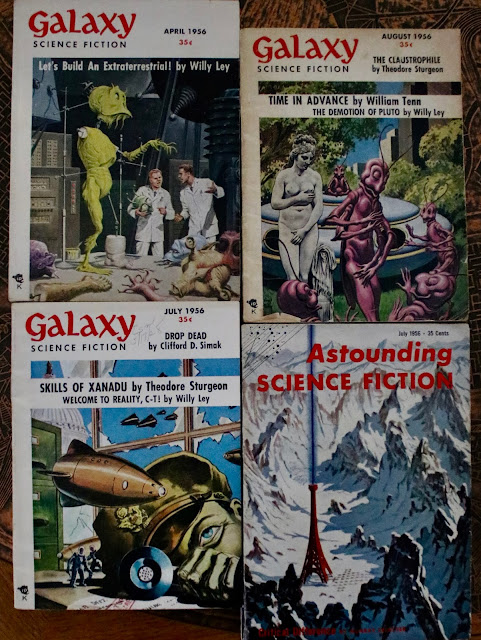 As usual, I envision a project, take forever to get started and often do not finish. In this case, I bought several science fiction magazines from 1956. I was going to read them last summer at the cabin, so the majority are from July and Aug. Cool covers helped in the selection; this is me after all. I dragged them out and did not read them. So this summer, which has been spent mostly in town, I decided to at least start. During my reading project with Doug, we focused heavily on his collection of vintage Analogs, so I did want to look at magazines that were not edited exclusively by JohnW. Campbell Jr. I picked 1956 for several reasons. I think two seminal events brought home both to the writers of science fiction and the reading public that they were living in a science fiction universe. One was the use of atomic bombs in World War Two. The second occurred on October 4th, 1957, when the Soviet Union launched the Earth's first artificial satellite, Sputnik I. A great deal has already been written about the predictive qualities of science fiction, the FBI visit to Campbell's office and the subscription history of the scientists involved in the Manhattan Project. So let's see what preceded Sputnik and if I get motived what followed immediately after 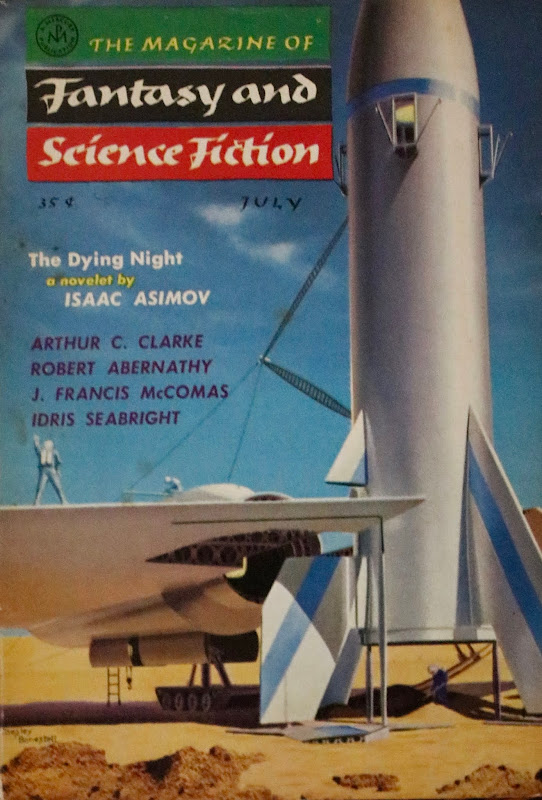 These are not reviews. Also, I am not pretending to make definitive statements about the state of science fiction as of July 1956. What I am providing are my observations and impressions rather than any conclusions. The table of contents can be found here.

The cover is the work of Chesley Bonestell. I love Clake, so I stared his short story, "No Morning After". Here we have a telepathic race that is attempting to warn Earth of a potential problem. The only individual they can reach is a drunken engineer whose credibility has been trashed because he wants to design rockets, not missiles. This very pulpish start and the title did not encourage me to finish, so I didn't. I must be getting cranky in my old age.

In search of something more promising, I read "The Club Secretary" by Lord Dunsany. I am a fan of the Weird Tale, the Lovecraft circle and Edwardian and Victorian fiction, so this was an obvious choice. It was a Jorkens story meaning it was a club story where the narrator, in this case, Joseph Jorkens, relates a story to the fellow members of his club. I love Dunsany and Jorkens, and the club story format has a long history in science fiction. I did not realize there were approximately 150 stories "Jorkens" tales. I have some reading to catch up on. In "The Club Secretary" Jorkens tells of a walk he took out of London. He sees a beautiful garden and slips through a hedge for a closer look. There is a lovely building which he thinks is the clubhouse of a golf club. He approaches the doorman to apologize for trespassing and to ask the name of the club. He is directed to the Club Secretary, who informs him that it is a club for poets. Not just any poets, of course, but only the best. Jorkens tales often have a sting in the "tail". In this case, it is the secretary's identity and why he is allowed to work there, but is not a member. I enjoyed this story. For those who want to read more about Dunsay's Jorkens tales and club stories in general, this link is helpful.

Next, I read "Emily and the Bards Sublime" by Robert F. Young. I have included some information about Young and the next author I will discuss Idris Seabright below. Emily Meredith is the assistant curator of The Hall of Poets, here in the 21st century it is something of a hard sell. While Emily looks after all the poets, Alfred Lord Tennyson is her favourite. Emily has been waiting years for the public to recognize the value of her poets, but the Hall of the Automobile or The Hall of Electric Appliances are more popular. So it should come as no surprise, although it does when Mr. Brandon the curator tells her the directors have agreed to allow him to dismantle the Hall of Poets so he can create a new Chrome Age of the Automobile exhibit. While Brandon claims the poets will be in storage, Emily realizes that all of them Shelly, Leigh Hunt, William Cowper and her beloved Alfred are destined for the scrap heap. What does Emily do? I will encourage you to find out. I enjoyed this story; it is the type of strange mixture of science fiction and fantasy story I encountered when I began reading science fiction. I have not read Young before, but I already have identified several car-related titles I want to read. I was born in Windsor, Ontario, so it seems only fitting. As anyone who has looked at my other blogs would know I love poetry and poets. One interesting aspect is that the poets are called androids, but are very limited, They just seem to respond to certain verbal prompts by reciting verse.

The next story I read was "White Goddess" by Idris Seabright (a pen name for Margret St. Clair). This story concerns a visit by a young man named Carson, with Miss Mary Smith, an old lady he met on the boardwalk. He had accompanied Smith to her home, but this visit is not going to plan. Carson makes a habit of seeking out old ladies and escorting them to their homes. Once there, he pockets small, relatively valueless items. These items bring in almost no money. Indeed he deposits any ill-gotten gains in a separate account that he never uses. He attributes his behaviour to a neurosis he enjoys. Smith, however, is no easy mark. She somehow knows everything he had pocketed even when her back was turned. She is also capable of physically manipulating him by using the object, spoons, a small watercolour and snow globe that he randomly selected. The "White Goddess" was another interesting story. Seabright has included several plot twists, and the story becomes the type of mildly horrific weird tale I enjoy.

These were very much fantasy stories. "Emily and the Bards Sublime" especially reminded me of the type of Ray Bradbury story I enjoy. It is tinged with nostalgia for the values of the past, a bit anti-establishment or anti-bureaucratic and highly romantic. It reminded me of Bradbury's stories "Usher II "or "Tyrannosaurus Rex". It combined elements of showmanship and poetry, with the gentle impractical resolution I associate with much of his work.

The "White Goddess" reminded me of the type of low key horror that can be found in the Bradbury collections The October People or The Illustrated Man.

I will be discussing other stories from this issue later, but for now, I leave you with this thought. I came to read this magazine in part to look at the pre-Sputnik science in science fiction, and instead, I found poets and goddesses, Buicks and "A rose-red city half as old as time"  and I loved it all.

(1915-1986) US writer, better remembered for his Science Fiction despite a regular production of short fantasy stories for over 30 years after "The Black Deep Thou Wingest" (1953 Startling Stories). Like many of his best stories, this had a strong sentimental flavour, almost of Belatedness.

Most of RFY's best sf was collected as The Worlds of Robert F. Young (coll 1965) and A Glass of Stars (coll 1968), but his best fantasies are uncollected. [MA]

"Young was a slick, polished writer; his stories are readable, often superficial, but the best of them have some of the emotional force of the work of Ray Bradbury , Robert Nathan or Theodore Sturgeon, all of whom seem to have influenced him. The best generally appeared in The Magazine of Fantasy and Science Fiction"

The Encyclopedia of Science Fiction

The Encyclopedia of Science Fiction goes on to note a number of other automobile related works including "Crome Pastures" and "Romance in a Twenty-First Century Used-Car Lot" (November 1960 F&SF, in which the American automobile mania is extrapolated to absurd extremes.
Margret St. Clair
The Idris Seabright stories appeared almost exclusively in The Magazine of Fantasy and Science Fiction , beginning with "The Listening Child" (December 1950 F&FS) and ending with "Graveyard Shift" (February 1959 F&SF): St Clair became temporarily better known for these than for the works published under her own name. They were smoother-textured than her pulp adventures and oriented more towards Fantasy.
Posted by Guy at 2:37 PM

Email ThisBlogThis!Share to TwitterShare to FacebookShare to Pinterest
Labels: Year; 1956