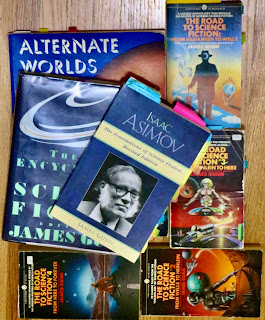 James Gunn passed away in December and I have been meaning to put something together since Helen told me. I read his novel The Immortals as a teenager (I vaguely recall seeing an episode of the TV series as well) and one of his final short stories, "Quantum Theory" in Asimov's Science Fiction in 2019. I knew Gunn primarily as a critic and scholar of science fiction. His introductions to the stories that appear in his series The Road to Science Fiction have in some cases radically changed my understanding of the stories. I read his  Hugo winning Isaac Asimov: The Foundations of Science Fiction at the same time I reread the Foundation Trilogy and enjoyed it immensely, again it greatly added to my understanding of Asimov's work.

I was surprised at how many of Gunn's books I had accumulated when I scanned my shelves. I knew I wanted to read something of his and since I had Transcendental the first volume of his Transcendental Machine Trilogy I decided to start there. I knew it involved aliens and space travel. I did not know it was 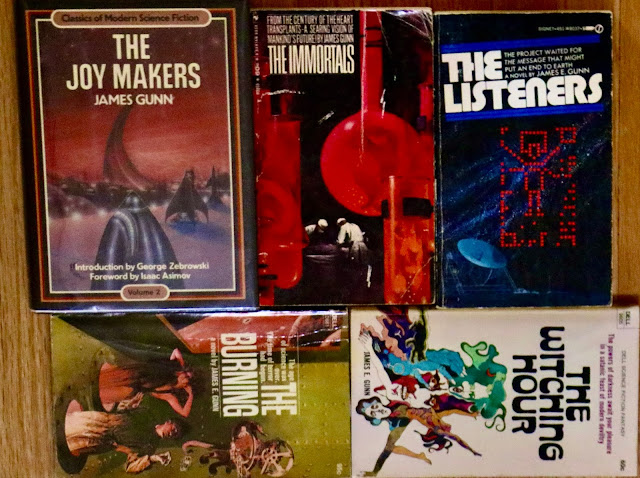 " an epic, high-concept space opera, is a Canterbury Tales of the far future in which beings from many planets hurtle across the universe to uncover the secrets of the legend of Transcendentalism"

However when I found out I was okay with that. Actually I had begun reading A.S. Kline's translation of The Canterbury Tales, a text I first encountered in high school, a few days ago so it was a funny coincidence. Also as you can see from my library books the idea of alien lifeforms fascinate me. 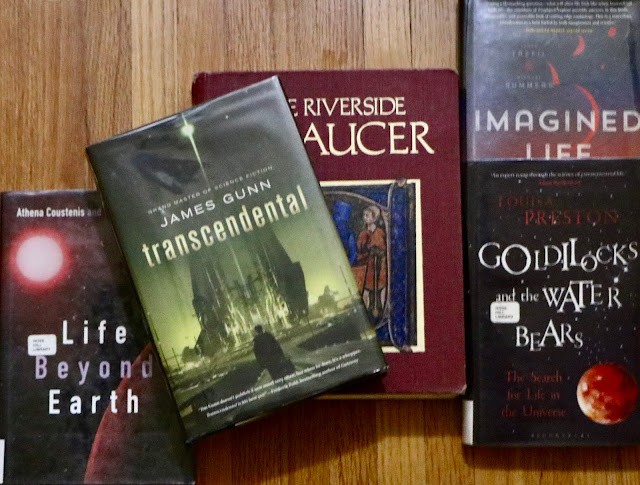 We first met the protagonist Riley in the waiting room of a space elevator, which will take him and his fellow pilgrims to a starship named Geoffrey. The pilgrims are en route to find the Transcendence Machine, whose existence was predicted by the Prophet, a mysterious figure no one can identify. They have just fended off an attack by the barbarians who inhabit portions of the planet. Riley and a heavy planet alien named Torder decide they should enlist some of the other pilgrims into a protective association. Since Riley and Tordor don't know if they can trust each other, they both choose different pilgrims to approach about joining. Riley's first choice is a human woman named Adia. She declines, so he enlists two space crew types called Jan and Jon. Tordor chooses a flower-headed alien 4107; he then approaches an alien in a coffin-like tank who declines. His last choice is bird-headed Alpha Centurian. Even though Jan was on watch, Riley wakes to find he has grabbed the arm of a weasel-like alien who approached him with a knife while Jan was drugged.  The arm comes off and the alien retreats claiming he only intended to warn Riley that Jan was asleep. Riley returns the arm and knife to Xi (it will grow back). He notes that Adian watched the entire encounter but did not warn him. She says Xi did not intend to kill him and that even if he had only the tough will survive.

Riley was woken by his pedia, a device that is implanted in his head. It watches over Riley, supplying information he needs and quotes from old earth literature, including The Canterbury Tales he could do without. The elevator finally arrives, and the pilgrims depart. On the trip up, the unbreakable cable breaks, and the car is launched into space. The captain of the Geoffrey rescues them, and Riley learns it is his old friend Ham.

When humans first moved out of the solar system, they encountered the Galactics, a group of alien species that travel via Nexus points. War breaks out with some aliens siding with Earth and some against it. The war is bloody and prolonged, but eventually, peace is negotiated. All the races agree that anyone who violated the treaty will be destroyed by the rest acting together.  Riley was Ham's navigator during the war. Their ship was destroyed, and both men were severely injured. They did not realize the other had survived. Since the war, Riley has been a troubleshooter or mercenary for a number of organizations. While on vacation, Riley was either abducted or possibly the simulation he was using is hijacked. He is told he will be rewarded for joining the pilgrims and gaining control of the machine. If he finds the Prophet, he is to kill them. It is at this point that the pedia was installed in Riley's head. If he refuses to carry out the instructions, it will kill him. Riley does not know who has recruited him.

Once on the ship, the pilgrims begin to tell their stories. Some stories are private and not shared with the entire group. It is here that Gunn's work suffers a bit by comparison with Dan Simmon's take on The Canterbury Tales in his novel Hyperion. Simmon's stories are longer and more vividly imagined.  The first three stories in Gunn's work are a bit pedestrian. They are based on historical or biological analogs and seem familiar or predictable.  They lack some of the alien aspects one might hope for. They are individual histories and also serve as capsule histories of the species, which is handy. Tordor comes from a race of herbivores who raise selected children in a brutal Spartan-like military environment. Xi was raised in a nest where the weakest siblings were killed by the strongest. Kom, the Sirian's story, was more interesting. The children develop in the father and eat their way out. With advances in medical technology, the father typically survives. Kom and his father do have a good relationship until mom eats dad.

It is only with Adia's story, which she tells Riley, that the book comes into focus for me. Here we start to get the needed backstory. The stories from now on will be related not as part of a travel ritual but in response to specific events, making them much more effective. When they are introduced, I was anxious to hear them. They also become more original. The next tale by the flower headed alien 4107 relates the rise of a race of sentient plants. This story introduces the world-building originality and narrative arc that brings science fiction to life for me. The idea of how racial memory would shape the development of a race of plants fascinate me.  They use plant-based ships and uplift other vegetation, oh my.

"How can I describe the impact of intelligence? Each species represented here has experienced it, but none remembers. Florians remember. The history of our species is recorded in the seeds of their consciousness. At first it was only the memory of process, the irresistible bursting from the seed pod, the passionate thrusting upward toward the sun...," (203)

I love the Florians; they are a very nicely realized culture, and Gunn handles their introduction to the larger Galactic society really well.

Overall I enjoyed Gunn's novel. It had many of the space opera elements, action, alien cultures, and scale that I enjoy.  As I became more familiar with the setting and characters, I grew more interested in the story. I wanted to see how these elements fit into the plot going forward. I only have volume one, but I notice the entire trilogy is available on Kindle at a reasonable price, and I will be buying it. Today.