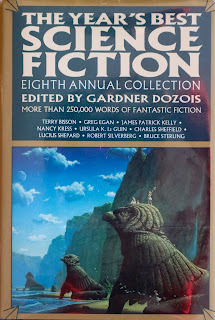 “It is the spiritual emptiness. A terrible grinding emptiness in the very guts of the West, which no amount of Coca-Cola seems able to fill.”


I have been reading a lot of SF short stories lately so when in the introduction to We See a Different Frontier: A Postcolonial Speculative Fiction Anthology I found a mention of Bruce Sterling’s story “We See Things Differently” that was described as having made a “very powerful impression” on one of the editors, I was intrigued. Since it was the wee hours of the morning (insomnia) and the story was online, I did not have to get up to find a book (which sets the dogs off) so this was an added bonus. Sterling’s story was quite different from my normal reading. I have found contemplation of our immediate future uncongenial for some years, and this trend is getting worse. So I prefer my SF to be new space opera, old (age) space opera, space colonies, post human explorations of the universe, alien worlds, mutant kids with super powers and disasters involving people in the UK. A world where we all go blind and get whacked by giant plants is the kind of thing I like. Obviously the less likely things are to happen the more I like it.

Sterling’s story does not fall into this category, he has a reputation as a futurist and I can see why. Our story begins when “Sayyid Quth, my friends call me Charlie”, a print journalist for Al-Ahram, flies into Miami in the hopes of interviewing Tom Boston an American rock star. Al-Ahram is a Muslim newspaper which publishes from the Caliphate, a Muslim superstate created by the “Islamic Resurgence" that has replaced the majority of the countries in the Middle East. The America Charle enters has been reduced to a third world country. The Afghan Martyrs’ Front has destroyed Moscow with a nuclear bomb. Ten years later tides of factionalism continues to tear the USSR apart. This has emboldened other countries which had vacillated between the two super powers. South America has refused to pay it’s debts to the United States. The Muslims, Europeans and Asians have used their US currency reserves and independent banking systems to destroy the American economy.

Tom Boston a failed politician turned rock star has begun to gather a following among a wide spectrum of Americans, politicians and members of the upper class throng to his concerts as do the unemployed and a disaffected working class longing for a return to America’s previous preeminence in the world. Boston’s entourage sells souvenir shirts, programs and tapes, many of these items are brochures lauding small scale made in America enterprises while deriding multinationals banking profits overseas. The details of the actual concert suggest that Sterling’s story may take place in slightly altered universe, but the political nature of the material is clear.

This is a powerful story and I loved this story on a number of levels. Sterling is a very good writer, details of the current state of the world and a capsule summary of Boston’s life are effortlessly integrated into the flow of the story without interrupting the narrative. The third world status of the United States is conveyed using the typical stereotypes we would see in a story written by a Westerner travelling in the third world. But Sayyid Quth is a very effective guide and for me this did not feel heavy handed. Instead it really underscored how this society might appear to outsiders who not only bring different cultural or religious backgrounds, but also have experienced Western Imperialism from the other side. Sterling’s story initially appeared in 1989, and I found a print copy in Dozois' Eighth Annual, The Year’s Best Science Fiction Collection. I don’t think the story has dated and I think it would still be very relevant for today’s reader.

It also demonstrates what I think are the strengths of the short story form. Sterling has created a incredibly intricate backstory with world events filled out just enough to read as plausible given the details provided. The characterization is good, the characters, even the minor characters read as real people their behaviour consistent, again within the backstory provided. At a longer length, a 1000 page tome or trilogy or worse parsed out over years, I think the cultural stereotypes and the polemics on both sides, which currently enliven to the story, would pale. As it is, the story makes me think and frightens me a bit. In the 1989 introduction the Year’s Best edition states, “ Here’s a chilling and uneasily timely story that demonstrates that events have long shadows, that some threats don’t disappear just because you no longer see them, and that some people do not forgive-or forget.” this was true of this story in 1989 and is still true today.