My wife brought the following review from The New York Times Review of Books to my attention. The Making of Future Man by James Gleick a review of
The Perversity of Things: Hugo Gernsback on Media, Tinkering, and Scientifiction by Hugo Gernsback and Grant Wythoff.

Given that I devoted my last post to Hugo Gernsback and his novel Ralph 124C 41+ I suspect I know how I will be spending next month's book budget. I already have my eye on something for this month. 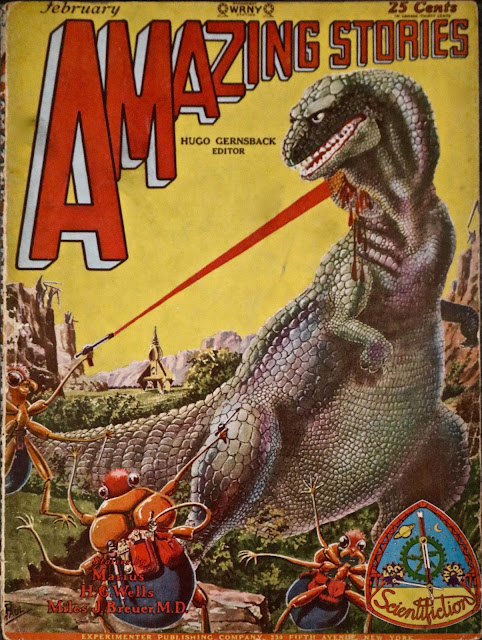 
" In 1905, a young Jewish immigrant from Luxembourg founded an electrical supply shop in New York. This inventor, writer, and publisher Hugo Gernsback would later become famous for launching the first science fiction magazine, Amazing Stories, in 1926. But while science fiction’s annual Hugo Awards were named in his honor, there has been surprisingly little understanding of how the genre began among a community of tinkerers all drawn to Gernsback’s vision of comprehending the future of media through making. In The Perversity of Things, Grant Wythoff makes available texts by Hugo Gernsback that were foundational both for science fiction and the emergence of media studies.
Wythoff argues that Gernsback developed a means of describing and assessing the cultural impact of emerging media long before media studies became an academic discipline. From editorials and blueprints to media histories, critical essays, and short fiction, Wythoff has collected a wide range of Gernsback’s writings that have been out of print since their magazine debut in the early 1900s. These articles cover such topics as television; the regulation of wireless/radio; war and technology; speculative futures; media-archaeological curiosities like the dynamophone and hypnobioscope; and more. All together, this collection shows how Gernsback’s publications evolved from an electrical parts catalog to a full-fledged literary genre.
The Perversity of Things aims to reverse the widespread misunderstanding of Gernsback within the history of science fiction criticism. Through painstaking research and extensive annotations and commentary, Wythoff reintroduces us to Gernsback and the origins of science fiction. "
Posted by Guy at 3:47 PM