Xenu’s Paradox: The Fiction of L. Ron Hubbard and the Making of Scientology 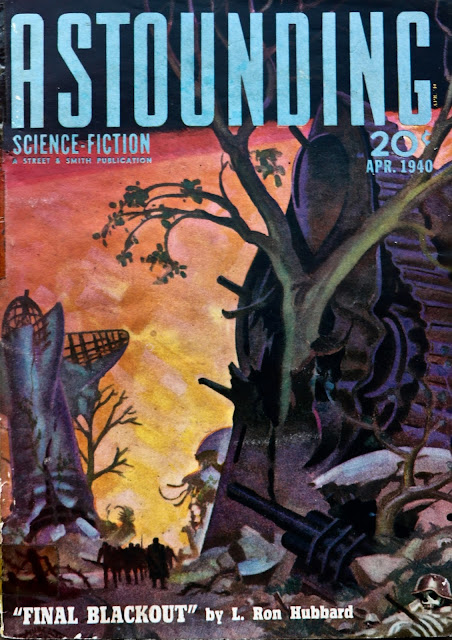 April 1940, cover by Hubert Rogers
(for Copyright purposes I want to mention that I took
this photo of one of my pulps. I do not republish
photos from other sites.)

I found the following article on http://aldaily.com/

I thought it would be of interest to readers  of early SF. Any conclusions are of course those of the author, but I thought the link worth passing along and I am looking forward to reviews of his upcoming book, Astounding: John W. Campbell, Isaac Asimov, Robert A. Heinlein, L. Ron Hubbard, and the Golden Age of Science Fiction.

"Xenu’s Paradox: The Fiction of L. Ron Hubbard and the Making of Scientology"

Alec Nevala-Lee, author of Astounding, a forthcoming book on the history of science fiction, digs into the writing career of L. Ron Hubbard, gaining new insights into the life of the controversial founder of dianetics and the origins and nature of Scientology itself.
https://longreads.com/2017/02/01/xenus-paradox-the-fiction-of-l-ron-hubbard/

quoted from the article;

"And it gets even stranger. When we turn to the stories themselves, we find that most of them have nothing in common with the tale of Xenu. In the pages of Astounding, Hubbard tended to write comic fantasies or adventures staged on a very modest scale, with situations lifted straight from the nautical or military fiction that he was publishing elsewhere. Aliens and galactic empires rarely played any significant role. When he employed these conventions, it was as a target for parody or as a kind of painted backdrop for the action. Yet when the time came to give Scientology a founding myth, he turned to space opera, referring to it explicitly in those terms, and the result didn’t look or sound much like anything he had ever written before."
Posted by Guy at 5:12 PM