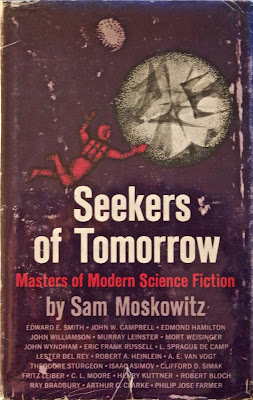 Last month I noted that I had purchased Sam Moskowitz's Seekers of Tomorrow.

I have since read a number of the entries on SF authors and enjoyed them enough that I purchased another of his non-fiction works Explorers of the Infinite which deals with earlier figures of interest in the history of SF. I also purchased two anthologies edited by Moskowitz, The Coming of the Robots and Exploring Other Worlds.

Moskowitx is an significant figure in early SF history. As a fan he participated in some of the early feuds, which he chronicled in his book The Immortal Storm: A History of Science Fiction Fandom (1954)


"As a child, Moskowitz greatly enjoyed reading science fiction pulp magazines. As a teenager, he organized a branch of the Science Fiction League. Meanwhile, Donald A. Wollheim helped organize the Futurians, a rival club with Marxist sympathies. While still in his teens, Moskowitz became chairman of the first World Science Fiction Convention held in New York City in 1939.[2] He barred several Futurians from the convention because they threatened to disrupt it. This event is referred to by historians of fandom as the "Great Exclusion Act"." 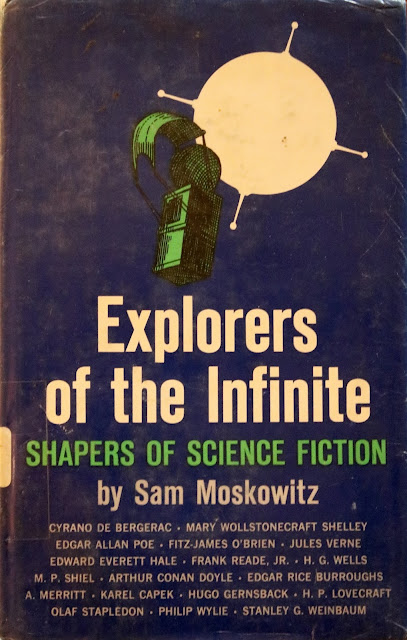 He was an author, an editor of both magazines and anthologies, taught one of the first courses on SF and was a significant collector of early SF.

"Along with Forrest J Ackerman, he was the most significant twentieth-century American collector of sf books and memorabilia, describing his extraordinary library in "Anatomy of a Collection" (in Science/Fiction Collections: Fantasy, Supernatural & Weird Tales, anth 1984, ed Hal W Hall). Tragically, his library was dispersed after his death."

As I have mentioned I really enjoyed his profiles of writers like A. E. Van Vogt, E.E. (Doc) Smith,  Isaac Asimov, Ray Bradbury, Fritz Lieber, and Arthur C. Clarke among others. While his non-fiction has been criticized for a lack of scholarly rigor, I instead got the impression of a man who knew many of the writers through a long connection to the field, and had a greater knowledge of how their character and personalties influenced their writing than someone who encountered them only through reading their works, and reviews and critical discussions of their works by others. I particularly liked his discussion of A.E. Van Vogt an author I think is now often dismissed or misunderstood. It is said that in the early days of SF a fan could read everything published in the field. I am not sure this is true, pulps and early magazines came and went at a furious rate, but I think they could have read the most significant works. And Moskowitz seems to have tried.

"The entire published science-fiction output of every science-fiction writer discussed in this book (the average career spans more than twenty-five years) was read or rather re-read. ….. Quite literally, it took thirty years of reading  and collecting to make the writing of this book possible." (5) Seekers of Tomorrow, Masters of Modern Science Fiction, Sam Moskowitz, (1961)

"Moskowitz did more original research in this field than any other scholar of his period and few since; no later history of sf has failed to make use of Moskowitz's painstaking work, especially his research into the early History of SF."

I wanted to look at some anthologies edited by Moskowitz to see which stories he selected and what notes he provided. When I saw these covers on the ISFDB database I knew these were the one's I wanted, I loved the covers, I also liked the fact they came with the original Canadian Price stickers. (As an aside, Canadians always pay more for books than purchasers in the United States regardless of the exchange rate, an irritant constantly reinforced by the fact that both prices are listed on the books.)

The Coming of the Robots, Collier Books, 1963, sadly the artist is not credited. One has to wonder how the robots are going to deal with the large stones, or whether like the early Daleks of Dr. Who, their intentions benevolent or not, may be thwarted by the same mobility issues. 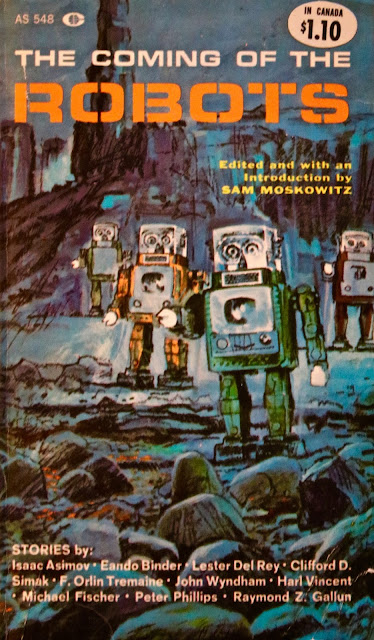 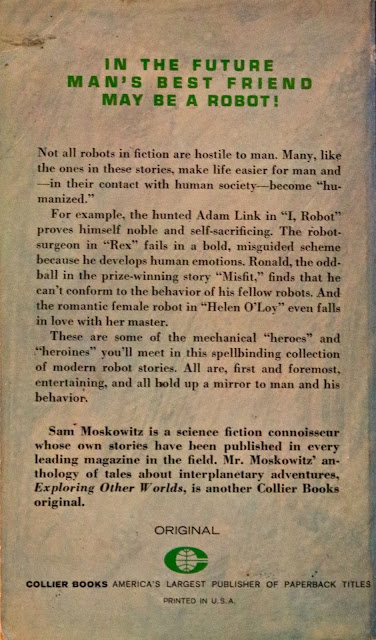 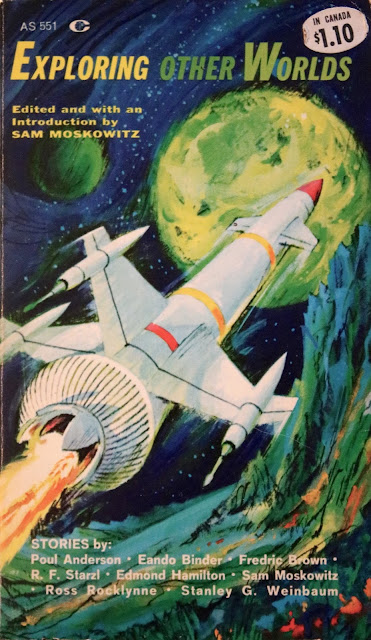 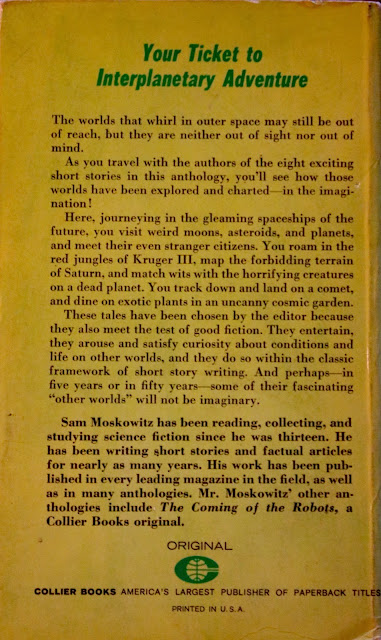