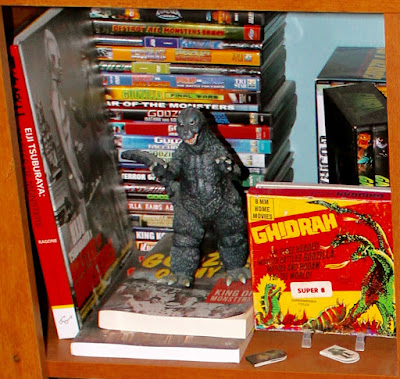 Sad news, Haruo Nakaijima the actor that played the original Godzilla has passed. I love Godzilla movies, with the exception of a few very obviously aimed at children like All Monsters Attack, and the abomination starring Mathew Broderick, okay I am not so cool on the whole Minilla (baby/son of Godzilla idea) but I have some 20+ Godzilla CD's, books my favourite being Godzilla on My Mind: Fifty Years of the King of Monsters by William M. Tsutsui. I have limited myself to one figurine however. I did not bother to see the latest movie from Toho after reading reviews but I am enjoying the latest American reboot.  A link to my comments on Kong Skull Island appear below. So i was saddened to hear of the death of  Haruo Nakajima. It is fun to watch the original Japanese version and then the American version with Raymond Burr to see how he is inserted into the film. I just love the nuclear theme, the models (even the wires), the huge number of alien threats and the general look of the early films.

They also led me to other, rather cheesy Japanese films like Aragon, The Mysterians, Warning from Space etc. I still re-watch my favourites when I need a break from reality.  Since the number of films I brought to the cabin is limited I think tonight I will re-watch The  Mysterians an alien invasion story (they want our women) featuring Haruo Nakaijima as Moguera one of the oddest looking giant robots ever seen in SF films. Now that's entertainment

Email ThisBlogThis!Share to TwitterShare to FacebookShare to Pinterest
Labels: Godzilla, In Memoriam