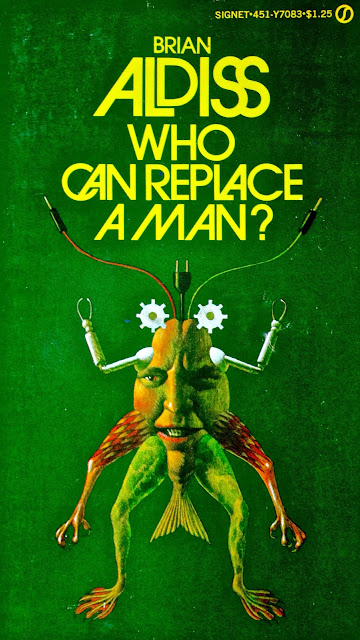 
Upon hearing of his passing I began to look for media discussions of not just, his death but his career. I did not find a lot in NA sources, Tor did have a nice post, and I did find some material from UK sources, here are some links I found informative.

For a full discussion of this career, please see his entry in the Encyclopedia of Science Fiction.

I had just completed my post when I found this remembrance on Battered, Tattered, Yellowed & Creased

Aldiss last book Finches of Mars came out in 2012 and he began publishing with the short story "Criminal Record "in 1954. He published some very significant science fiction novels including, Non-Stop (1958), Hothouse (1962), Greybeard  (1962), and Barefoot in the Head (1969). He was also an anthologist of note, producing among other titles, a Best SF Series with Harry Harrison that ran from 1968-1976. Aldiss and Harrison's comments on SF in these volumes are worth the purchase price by themselves. He produced one of the great histories of SF, the Billion, Later Trillion Year Spree (1986), which pointed me towards a number of writers. And while I am not in total agreement with some of his conclusions and omissions, it is a great read for anyone interested in SF. His career was a long and fascinating one, starting in the 1950's, when the field was dominated by the likes of Bradbury, Heinlein, Asimov, Clarke, Sturgeon etc., on into the 1960's when he became a part of the New Wave, (see quotes below) and then continued up to the present day. And through it all Brian was not just writing SF but also promoting it and acknowledging it's importance both as a genre and in his career, I am a bit surprised his profile was not higher within discussions of the field.

"Aldiss was instrumental in obtaining a 1967 Arts Council grant for the magazine, which saved it for a few years. Though never fully at ease with New World's submission to an aesthetic dominated by J.G. Ballard, Aldiss published some increasingly unconventional fiction here, notably his novel Report on Probability A (short version March 1967 New Worlds; 1968; written 1962 but unpublishable until the times changed)"

Aldiss in these interviews does not shy away from discussing unpleasant aspects of the field.

"As for Ballard, “he fell in with a dreadful fellow, an artist who designed one of the Underground stations [Eduardo Paolozzi] and just ceased to be a friend. Perhaps because he didn’t like being associated with the label of science fiction. I don’t like the label, but I put up with it.”

As someone who loves the early Ballard but wants the time spent borrowing his later books from library, much less reading them, back I found these remarks interesting.

I have to admit I have gathered together a number of his works but read only a few. My wife has long enthused over his Helliconia trilogy so I will have to get busy. When I get home I hope to take a closer look at his work, I may wait until we visit London, to see what I encounter there.

So today rather than raise a glass I picked up his 1965 collection Who Can Replace a Man and read the title story. It will not be the last. Goodbye Brian.

Any thoughts on Aldiss?
Posted by Guy at 6:24 PM