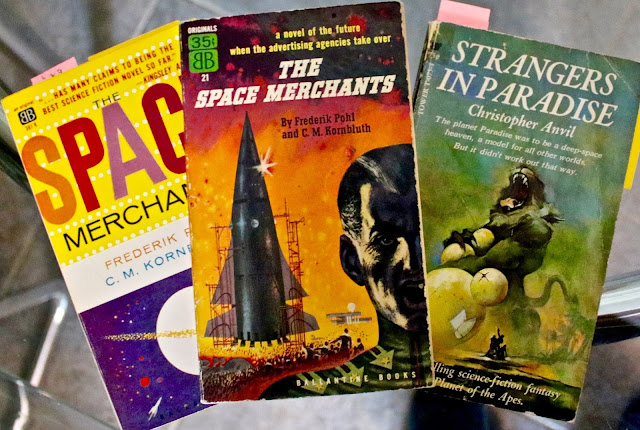 I have been a bit lazy with my blogging, so lets start again. My buddy Doug and I (see his guest post here https://ajaggedorbit.blogspot.ca/2017/05/guest-post-comments-on-h-beam-pipers.html ) meet once a week to discuss among other things SF. So I suggested we create a reading list of novels and short stories that we would both read and then discuss the next week. The criteria is fairly open, except the novels cannot be over 200 pages. This is because my attention span and eyesight are not what they used to be and I like to be able to cover a few things in a week. Also if I left it open Doug would probably try to sneak in some enormous tome like one of Weber's Safehold novels and well let's not go there. Otherwise we mostly alternate picks, Doug and I both both started reading SF with material published in the 1940's and 1950's and that and the page limit may influence what we read but we will try to be somewhat inclusive. I am trying to suggest material or authors I have not read especially some that are considered important in the history of SF that I missed the first time. But we also consider items one or both of us have already read and want to discuss. Doug has suggested a number of short stories and while I have a goodly number of anthologies some of these were never reprinted, go figure. So Doug brings over copies from his extensive collection of Analog/Astounding, Galaxy and If and I geek out over the covers, the illustrations and things in the table of contents other than the suggested stories. So that works. I will put together post on some of the items but so far we have read. 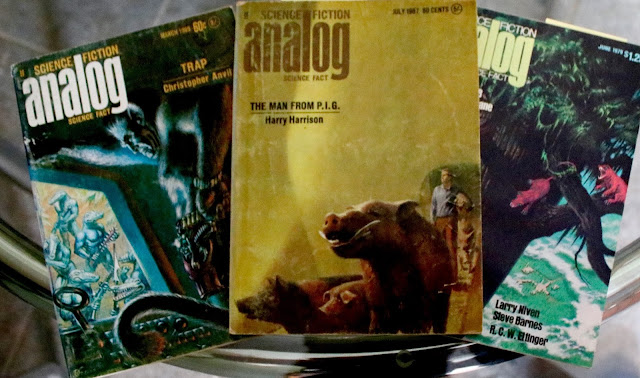 Some items for the next couple of weeks.


I am enjoying the exercise. I read stuff I would not have picked, I go through my library and the web looking for other titles to suggest, I love the hands on with the old magazines and I get to hear Doug's observations and opinions on what we cover. While Doug has suggested that we don't have to finish something we don't like I am more likely to finish a work I have started once we have both agreed to put it on the list. It also reinforces what a diverse field SF is in both subject matter and style. Doug's approach to the exercise as well as his tastes and mine often diverge but that also gives me a better understanding of the field and what people are taking from it, it is good to be flexible.

Doug has kindly supplied his take on our experience so far.

"I am making an interesting discovery, in that much of the material that I have been reading over the last few years, has been stuff that I have read before. The most attractive stories were/are ones that allow me to transport my imagination into very familiar worlds even with new extensions to the story sequence. What this exercise you have given me has done has allowed me to either enter the old world's through a different door, or to read books that I have not read before, the sum of these approaches has been quite revealing."

Bud Webster, SF writer and essayist in his, Anthopology 101: Reflections, Inspections and Dissections of SF Anthologies, when discussing the anthologies of Groff Conklin (24) notes
"At the time I was eight or nine , I didn't always notice who wrote the stories I read, and, with a few exceptions, I didn't bother to remember from one time to the next which writer I'd liked best the last time, I simply read everything with a rocket ship or an atom on the spine, indiscriminately.
But I kept noticing that the stories I liked best, the ones I'd remember from one week to the next, the ones I thrust on my friends with the words, "You GOTTA read THIS one!","