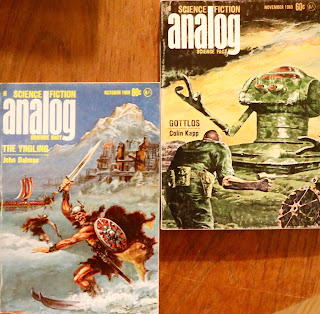 Alan Brown in his great series from Tor.com, Front Lines and Frontiers,  recently posted on "The Yngling" by John Dalmas. I really enjoyed this post. For one Brown provided a lovely profile of the author John Dalmas, a writer I had never read. Also I thought his discussion, It's the End of the World as We Know It, looking at the reasons why world ending catastrophes are such a common science fiction trope was quite good.

The first science fiction book I remember reading was The Star Man's Son by Andre Norton (link below) which I covered on my Norton blog, followed by a number of Wyndham's cozy catastrophes, so I always enjoy a good, lets blow it all up or something and try again story. I knew Doug had lent me the Analog containing part one of  "The Yngling" so I read it right away.

I liked it enough that I borrowed part two and read that. I enjoyed part one, the world building, the introduction of Nils Hammarson as a character, and I found his early adventures entertaining (think troll). However I found the second part where we see the culmination of the story at best anticlimactic, not bad, but a little rushed and overly talky perhaps. In his post Brown states "Another of my favorite stories of this type is Hiero’s Journey by Sterling Lanier, along with The Postman by David Brin." Since Hiero's Journey is a novel I really like, and had intended to cover here for some time, I thought I would discuss it now. 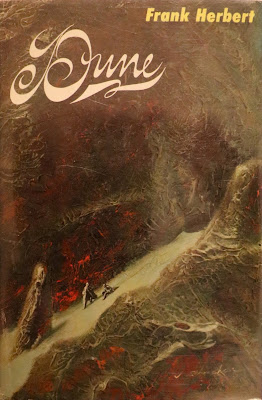 First off I should mention that Hiero's Journey was published in 1973 by Chilton, the same people who brought you Dune and some non-fiction books by Silverberg among their other titles. Indeed in the entry on Lanier in the Encyclopedia of Science Fiction, they note that while working as a editor at Chilton, it was Lanier that convinced them to publish Herbert's Dune. 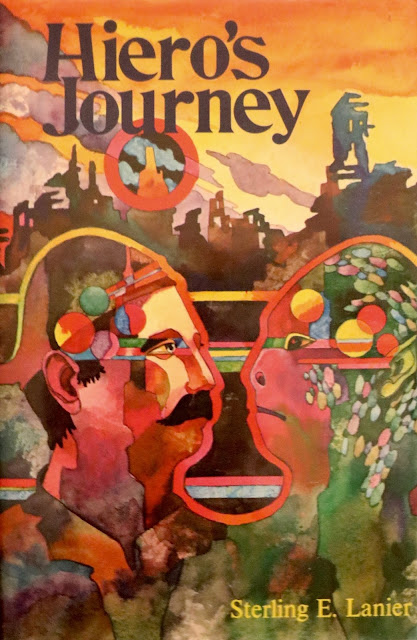 In 1983 Hiero's adventures continued where the first book left off with The Unforsaken Hiero. But where the first book ended with the central plot resolved, (and for years I simply considered the story over and was good with that) the second book created a number of cliffhangers. While Sterling Lanier lived until 2007, he does not seem to have released any new fiction after 1983/1984 and the trilogy was never completed. I have found some suggestion that Lanier may have suffered a stroke, but if anyone has additional information please let me know. So you may just want to read book one. 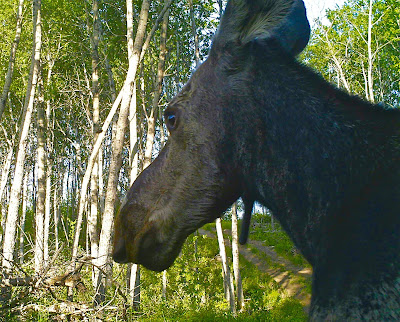 To prepare for this post I reread the book over Christmas at my wife's family farm in Central Saskatchewan (just up the road from our cabin). It is a parkland setting, poplar forests with lots of sloughs. The area is populated by among other critters, moose, black bears, beavers and fishers and on the drive up we saw a deer and a coyote. It is also an area central to the history of both Canada's native people (especially the Plains Cree) and the Metis. In short a perfect spot to read Hiero's Journey.

The story takes place five thousand years after The Death, from the description, some type of nuclear war that has decimated most of North America and created large numbers of mutations. The story follows the adventures of Per Hiero Desteen citizen of the Metz Republic, an area encompassing the former prairie provinces of Canada. This area is controlled by the Abbeys and Hiero, full title Secondary Priest-Exorcist, Primary Rover and Senior Killman has been dispatched south on a mission by his abbot. He is mounted on his giant mutant bull morse (moose) Klootz and within the first few pages he has been joined on his journey by Gorm, a telepathic black bear. For telepathy has spread widely since The Death. Hero can also communicate with Klootz although the morse is not terribly bright, Gorm on the other hand is as smart as a person. The land they travel in is one of immense danger. Most humans were killed in The Death and the cities largely destroyed. Some wild animals have grown to immense size, others called Leemutes have achieved intelligence and attack the remaining humans in coordinated groups often mounted on other Leemutes. The realization that these attacks are coordinated by a group of humans is the reason for Hiero's journey. Other creatures having not obvious connection to pre-death
lifeforms have also arisen. Hero's journey is not only an adventure but also a journey of personal growth as he learns to use his mental powers to counter a number of threats. He will meet more allies and also enemies who are stranger and more deadly than he could imagine. 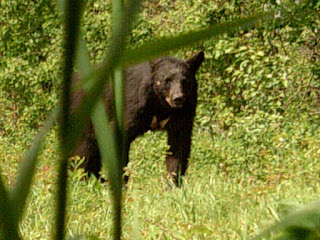 Lanier created an immensely interesting world, Hiero and his friends move through a number of different environments and encounter a number of different cultures.
There is an adequate amount of extrapolation and back story but the narrative does not bog down with lengthy explanations. Hiero is not presented as a superman, he has flaws and makes mistakes. He is reliant on his companions for help but also grows personally, strengthening his abilities.  As a Canadian who has read western Canadian history and also as someone who has spent a fair amount of time lately at the cabin with lots of critters around I could identify with many elements of the story. I enjoy it more now than when I first read it. I also loved the richness of the Lanier's world, a dam building culture of giant beavers, pirates, giant snapping turtles, giant lampreys, (okay giant everything) horse sized minks, mutated howler monkeys with cleavers riding dog-things and an evil psychic brotherhood. I think it is this richness and Hiero's growth that are the reasons I prefer this to the Dalmas story. And Lanier gives you your own morse to ride, what more could a story need.

The Yngling, part one Kelly Freas