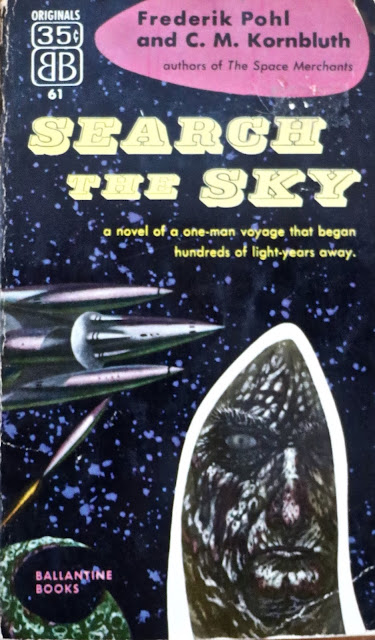 Yesterday Doug let me know that Betty Ballantine, who with her husband Ian began Ballantine Books, a huge publishing presence in science fiction had passed away at 99. The New York Times published a nice tribute.  "They started Ballantine Books in 1952, publishing reprints as well as original works in paperback.


While Ian Ballantine, who died in 1995, was the better known of the publishing duo, Betty Ballantine, who was British, quietly devoted herself to the editorial side. She nurtured authors, edited manuscripts and helped promote certain genres — Westerns, mysteries, romance novels and, perhaps most significantly, science fiction and fantasy.
Her love for that genre and knowledge of it helped put it on the map.
“She birthed the science fiction novel,” said Tad Wise, a nephew of Ms. Ballantine’s by marriage. With the help of Frederik Pohl, a science fiction writer, editor and agent, Mr. Wise said, “She sought out the pulp writers of science fiction who were writing for magazines and said she wanted them to write novels, and she would publish them.”
In doing so she helped a wave of science fiction and fantasy writers emerge. They included Joanna Russ, author of “The Female Man”(1975), a landmark novel of feminist science fiction, and Samuel R. Delany, whose “Dhalgren” (1975) was one of the best-selling science fiction novels of its time.
The Ballantines also published paperback fiction by Ray Bradbury, whose books include “The Martian Chronicles” and “Fahrenheit 451”; Arthur C. Clarke, who wrote “2001: A Space Odyssey”; and J.R.R. Tolkien, author of “The Hobbit” and the “Lord of the Rings” trilogy."
full obituary here:
https://www.nytimes.com/2019/02/15/obituaries/betty-ballantine-dead.html
When I moved from reading science fiction to collecting science fiction as well, Ballantine Books, with top notch writers and wonderful covers by Richard Powers were favourites. So I decided to pull some of the books from Ballantine's first two years (1953-1954, pre me even) from my shelves with a few comments. I will only attribute the covers if they are not by Richard Powers. Search the Sky is the first book I remember my buddy Doug and I discussing, possibly before we even started our reading project. We both enjoyed it. I love the covers where Powers combines his surrealist flourishes with realistic elements.
Brain Wave is an old favourite with both of us, ah! nostalgia and I love the chimp with the inexplicable device. I looked for years for a reasonably priced copy of More Than Human with possibly my favourite Powers cover of all time. 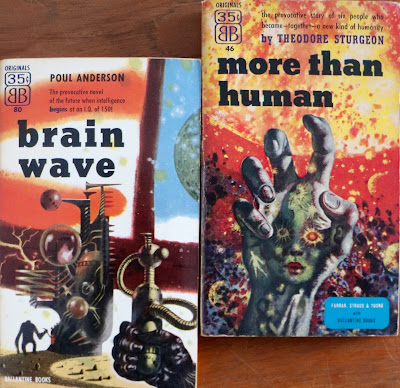 Out of the Deeps better known as The Kraken Wakes is my favourite Wyndham and my favourite "cozy catastrophe" lots of favourites in this post. The Space Merchants was I believe the first novel we tackled on our reading project. And I think I can say we were both impressed. It covered a number of SF tropes, including one of the first examples of meat grown via cell culture in this case "Chicken Little"

So I have a lot to be grateful to the Ballantines for, without this opportunity for authors to find paperback markets outside the pulps who knows what gems we would have missed.

Also I will include a couple links from ISFDB of some of the full wrap around covers.

Out of the Deeps 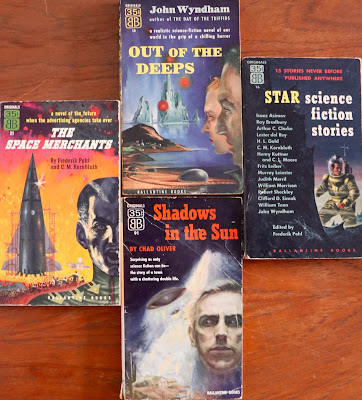 Shadows in the Sun, cover uncredited
Posted by Guy at 5:39 PM