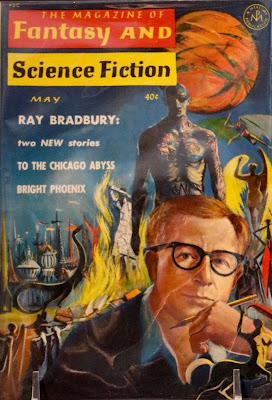 When I finished reading Astounding, Alec Nevada-Lee's book on John W. Campbell and some of the writers most associated with Astounding, Isaac Asimov,  Robert A, Heinlein, and L. Ron. Hubbard, I was of course, turned off by the behaviour of all four men. Women and minorities were not only not treated well in their fiction, but many of these attitudes continued into their public and private lives. That said I did not conclude that I should actually stop reading their work, indeed I made note of two stories mentioned in passing in the book that I wanted to read or reread as the case may be. Cover above by Joseph Mugnaini.

The first was "The Green Hills of Earth" by Robert Heinlein and the second was "The Red Queen's Race" by Isaac Asimov. I also read a third story "The King of the Grey Spaces" by Ray Bradbury, I am not sure were I saw this story mentioned, I do not think it was in Nevada-Lee's book. Ray Bradbury is occasionally mentioned in the book, but he was certainly never part of the Campbell school. Indeed Campbell turned down several significant stories that became part of The Martian Chronicles, including "Mars is Heaven" and "The Million-Year Picnic" (183) both of which were published in Planet Stories.

I will certainly continue to read and discuss all four authors. Asimov and Heinlein, and to a lesser extent Campbell formed an important aspect of the genre as I first experienced it. They also cast a long shadow over the field, shaping the tastes of many of the readers and at least some of the authors that followed them. I think it is important to at least understand what forces and individuals shaped science fiction as a genre. Many modern readers have noted that they find many of these early works poorly written, I cannot argue. They also object that these works typically feature exclusively white male protagonists and that the women and minorities that appear are poorly realized caricatures, again this is true.

Sadly when I look at the politics both in Canada and worldwide, I still see a world in which misogyny, racism and homophobia are forming large parts of the political platform and discourse of many parties, whether they acknowledge this or not. Science fiction has a number of features as a genre, one is that it allows us to examine aspects of our own culture through the examination of fictional societies. Also science fiction often reflects the influential events and cultural trends of the period in which it is written. This allows it to act as a lens by which we can understand not only the history of our own culture but if we read widely, offers insights into other cultures or groups as well.

I will touch on the Asimov and Heinlein stories only briefly. These descriptions do contain spoilers. "The Red Queen's Race" appeared in Astounding Science Fiction, January 1949. A physics professor, Elmer Tywood has died during an unsanctioned experiment at a nuclear power planet. Investigators determine that he was obsessed with altering the past. The crux of the story was, has he succeeded? It is pretty typical of Asimov's short fiction. It contains experimental science, including some explanations of physics and chemistry. It also contains the elements of a mystery story.

The reason I wanted to reread "The Green Hills of Earth", is that it was Heinlein's first appearance in a "slick", basically a general interest publication, in this case The Saturday Evening Post for February 8, 1947.  This story was part of Heinlein's Future History, a series of short stories, novellas and novels in which Heinlein " describes a projected future of the human race from the middle of the 20th century through the early 23rd century." 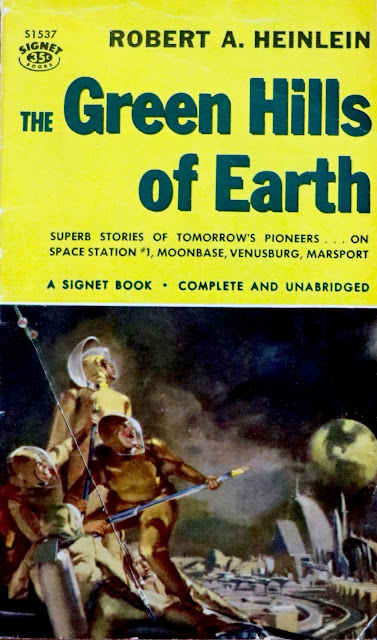 "The Green Hills of Earth" is the story of Rhysling, the blind singer of the Space-ways, and his act of heroism. This is a typical Heinlein story, the focus on a single man, Rhysling, a somewhat eccentric and manipulative cynic who typically gets what he wants. However despite his blindness he also remains one of Heinlein's/Campbell's idealized, competent man. The Future History is considered one of Heinlein's greatest fictional achievements John Clute notes, "Robert A. Heinlein's Future History was the first to appear in genre science fiction, being published in Astounding magazine in 1945.

John Clute, Science Fiction The Illustrated Encyclopedia; 1995 (66) (a beautiful book for anyone interested in science fiction) 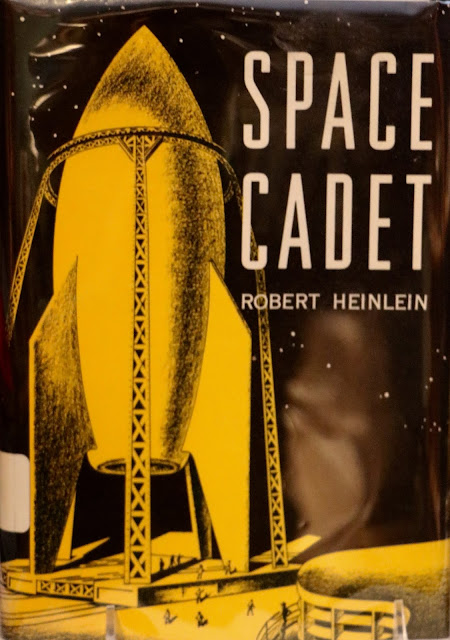 Ray Bradbury was (for me) one of the most important authors when I began reading science fiction. His work is often nostalgic and sentimental, the plots were not science oriented or propelled by engineering problems. Instead they focused on societal or personal change, sometimes with a strong leavening of horror as one might expect from an author who cut his teeth in Weird Tales Magazine. They are stories of atmosphere and mood, memory and a certain gentle melancholy. Ray still transports me out of myself and today better that any other writer. 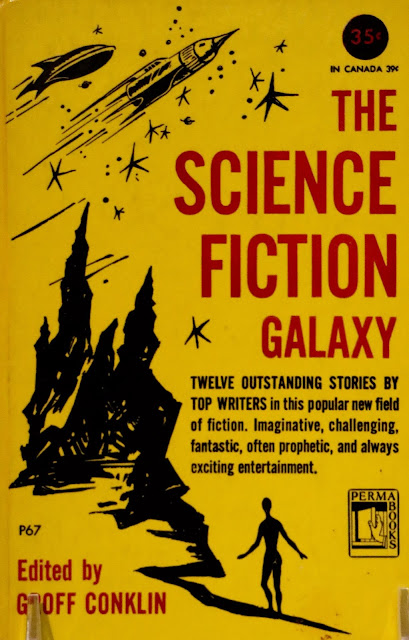 I read it here. Cover by Richard Powers

"King of the Gray Spaces" first appeared in Famous Fantastic Mysteries, in December 1943. It is the story of a teenager, Chris who spends his time attending school and hanging out with his friends. While the future is definitely different from ours it is not really developed in the story. Certain aspects are mentioned, but there is no depiction of the society as a whole. It is certainly an odd society, "Every Saturday morning the guys met at my house and yelled until the neighbors were moved to brandishing paralysis guns out their ventilators and commanding the guys to shut up their damned traps or they'd be frozen solid on the spot for an hour" (208) it certainly beats yelling "hey kids get off my lawn". And school seems a bit harsh, when Chris flunks his semantics test the teacher says. "if this keeps up I'II have you reclassified at the next psych-board meeting." (212) And this is important because, while Chris is part of a group of five other boys, he and his best friend in the group, Ralph Priory share an especially intense love of the great interstellar rockets and hope to work on them one day.

To do this they must be join the Patrol. Two thousand  young men a year are picked for training, no there is no mention of young women, some seventeen hundred will become solar engineers after ten years training. If you are selected you cannot tell anyone but your family. (Your friends will be told something like, you require psycho-reorganization, great) Chris and Ralph are about fourteen years at the time of the story, if not selected for training by twenty-one they will no longer be considered. This is not the mature Bradbury, his prose is often stilted. At one point Ralph is staying with Chris and "He reached out and punched me in the arm-muscle lightly" (223)

There is little world building, we get snippets here and there but nothing that will allow us to form any idea about what the lives of most people are like or the historical context of the current society.

While thinking about the Bradbury story I immediately thought of Robert Heinlein. Heinlein wrote a number of juveniles and his work often dealt with transition of teens to adults. But as one might expect of someone who attended Annapolis and wanted nothing more than a career in the Navy, it is often an organized transition and that is what Heinlein wrote about in books like Space Cadet and Starship Troopers. Should Chris be chosen by the Patrol he will also undergo intense training and discipline but that is not the part that interested Bradbury and in effect his story ended where Heinlein's would have begun. Because what interested the Bradbury who wrote books like Dandelion Wine and The Halloween Tree was childhood, running around town with your friends, yelling and rough housing, trick or treating and generally being kids.

And as clunky a story as this was, that is what I took away from it. I immediately thought of Windsor where I lived until I was 16, Willistead Park where we often played, (it also contained a public library), and the friends and classmates who I spent my time with. My brother once said no one did the joy of childhood better than Bradbury, while I added that no one did the dark side of childhood better either. This story captures the joy, it is the nervous joy of knowing that change lies ahead, but it was joy.

Dylan Thomas knew the feeling as well, in his poem Fern Hill

'"All the sun long it was running, it was lovely, the hay
Fields high as the house, the tunes from the chimneys,
it was air
And playing, lovely and watery
And fire green as grass. "