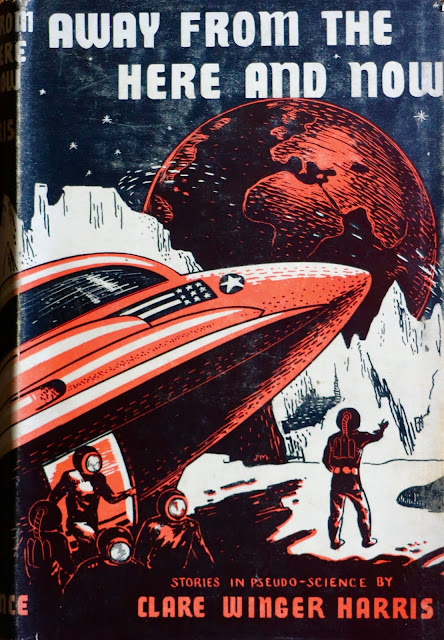 Some time ago Helen sent me the link below to Brad Ricca's introduction for the collection The Artificial Man and Other Stories, by Clare Winger Harris, Belt Publishing (2019). The introduction was a well written piece providing some real insights into Harris' career (she only published from 1926-1933)  and subsequent life. I was also intrigued that she lived in Lakewood, Ohio outside Cleveland when she wrote her stories. I was born in Windsor and had cousins in Cleveland who we visited a number of times. I have always have an attraction to "rust belt" writers who transformed the landscapes of my youth into the material of science fiction, evolutionary mishaps, mad scientists, alien worlds, far future Earths etc..

Ann and Jeff Vandermeer included Harris' story "The Fate of the Poseidonia"​ in The Big Book of Science Fiction,  (which I would urge you to buy), and I had read it there. In their introduction to the story they note;

Clare Winger Harris (1891–1968), a US writer, was the first woman to publish science fiction in the first generation of American pulp magazines. Her first story publication was “A Runaway World” in the July 1926 issue of Weird Tales. Harris wrote about women protagonists fairly regularly, especially in stories like “The Fifth Dimension” (Amazing Stories, December 1928) and “The Ape Cycle” (Science Wonder Quarterly, Spring 1930). In an environment that suffered from a dearth of strong female characters, this fact made Harris an early feminist in the field by default. Her work also contained a preoccupation with creatures not quite human, cyborgs and ape-people in particular. Although Harris has been reprinted frequently in the modern era, when she first assembled her work in Away from the Here and Now: Stories in Pseudo-Science (1947), she had to resort to self-publication through a vanity press. The story reprinted here, “The Fate of the Poseidonia” (1927), also features a female lead and won third prize in an Amazing Stories contest. In addition to portraying women in a way uncommon for the times, the story deals with the surprisingly modern themes of fear of technology and loss of privacy. This was the first science fiction story by a woman published in that magazine.

They go on to say that  "Harris went on to publish eleven more stories with Gernsback over the next three years. She stopped writing in order to see to the education of her children, but her name in the table of contents inspired other women to write and submit their own stories."

I have to say that I was perhaps a bit lukewarm on Harris'  "The Fate of the Poseidonia". I found it a bit long. The story takes place in 1945. The protaganist Gregory meets a man named Martell at a party. Martell is swarty, copper coloured, not unlike that of an American Indian. He is wearing a skull cap, his hand feels sponge like, and when the lights are extinguished for a slide show (lantern) his eyes glow in the dark. He also emits an air of distinct hostility toward Gregory. Gregory instantly dislikes and distrusts as well Martell, a situation that is not improved when Margaret Landon the young lady Gregory is interested in not only becomes interested in Martell, but breaks off relations with Gregory when he persistently try to warn her against him. Against this background of romantic entanglement the Earth begins to loose vast quantities of sea water. I found Harris' story as I said a bit overlong, but it was not atypical of other works of the period, the characterization was fairly perfunctory and the plot somewhat melodramatic and romanticized. Landon does play a greater role in the plot than many of the female characters of the period, and shows some independence of thought.

The story and Ricca's introduction (as well as the cover by J.M.?) did inspire me to get my own copy of her collection Away From The Here and Now, published by Dorrance & Company in 1947. I have to admit the subtitle "Stories in Pseudo-Science", a claim that could rightly be applied to much of science fiction, right through the John W. Campbell period and beyond, also attracted me. I found the information on the back of the book especially interesting. As it is a self published work, Harris has taken the opportunity to include information on each of her three sons and their service in the Second World War. 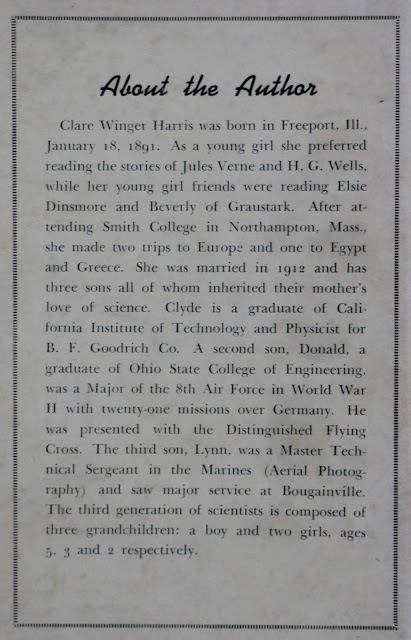 I did want to look at another of Harris' stories for this post, and well I could not resist the Paul illustration below.

It appeared in the Winter Edition of Amazing Stories Quarterly for 1929. 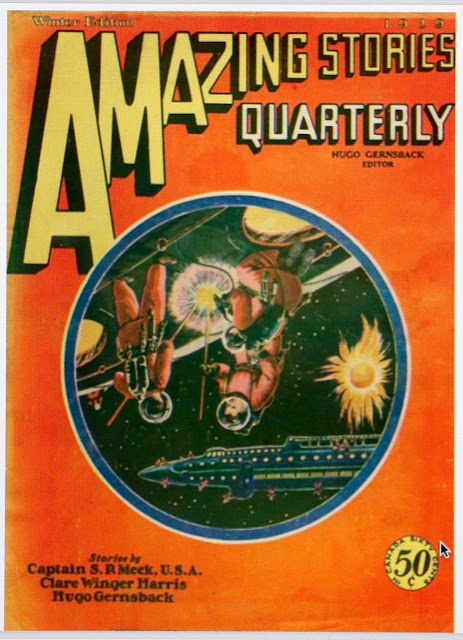 And the editor gives her story a nice introductory paragraph. Sorry it is a bit fuzzy. 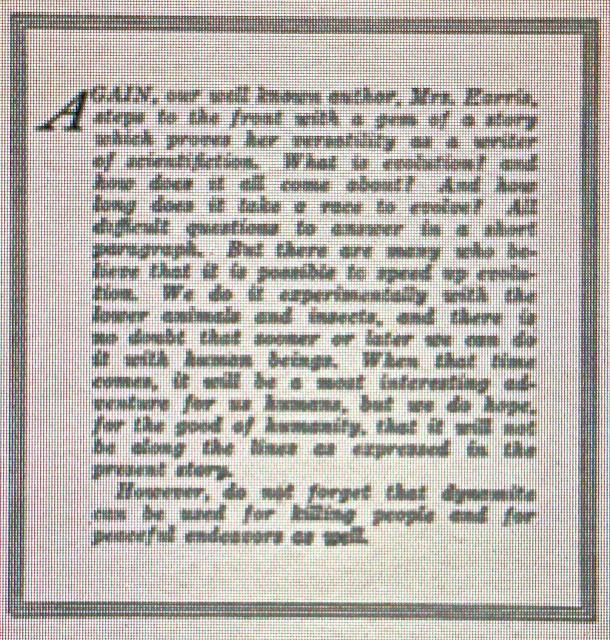 This discussion will include spoilers, I warn you now.

"" I believe you three fellows are going to startle the world yet" Professor Lewis of the Biology department remarked." The three in question are Ted Marston, the brightest of the lot and the holder of some interesting ideas about evolution and bacteria, Irwin Stanley the heir to a large fortune, and Fred Caldwell who will act as the narrator of the story. Despite their closeness, the three soon part ways. Stanley offers to finance Marston's experiments, and the two of them retire to the Stanley estate. Caldwell stays at the university as Lewis's assistant. He does not hear from his friends until the that summer when they invite him to the estate. Upon his arrival he meets Stanley's mother who begs him to convince them to stop their experiments. It seems one involved her cat Cutey who soon makes an appearance in search of Caldwell.

"It stood upright on two clumsily padded feet. Furless, its flesh the color of a decaying corpse, it seemed to me a miniature ghoul. The lidless eyes stared into mine with implacable hatred. But it was what I presume had once been whiskers that held my half reluctant, half fascinated attention. They bristled separately as though imbued with individual volition.
Suddenly a shrill whining voice spoke and I forced my eyes from whence it came. It issued from the tiny malformed object on the rug; a travesty on feline beauty as we know it.
"You are wanted in the laboratory. Come at once."

One the way to the lab Caldwell meets Dorothy, Stanley's younger sister, a beautiful but rather insipid young lady. She admits she finds Cutey a dear and quite intelligent. She also indicates that Marston is in control and Caldwell realizes she is infatuated with him. Having met Cutey Caldwell's reunion with his friends does not go well and rather than join them in their work he goes back to the university. Before he leaves Stanley admits to some worries about Marston's approach and he indicates that he fears Marston has introduced some of the evolutionary bacteria into his own system. Stanley also admits that he is unable to free himself from Marston's control.

Caldwell leaves, three years pass. Caldwell assumes Professor Lewis' s position upon his death. He has read of Mrs Stanley's death two years earlier. When he finally attempts to visit, some feeling of fear drives his away. It is not until he receives a note from Dorothy Stanley asking for his  help that he can bring himself to intervene. Caldwell goes to the estate and meets Dorothy. She has not seen Marston in over a year, all contact is through her brother who is his helpless tool. He has told her Marston means to rule the world and wants her as his queen. Her brother also administered the first of what is supposed to be a series of injections of the bacteria injections to Dorothy. Stanley appears with another injection, Caldwell notes Stanley seems to have become "more primitive", he knocks Stanley down to protect Dorothy. Caldwell and Dorothy are in love, within two pages, wow.  Caldwell take Stanley back to the lab, before he leaves he assures Dorothy that "Environment must play a part in the future development of the race, and Ted has no greater environmental experience then we have had. His physical body may have changed but not exactly as ours will, for the mollifying influence of man's changing surroundings would tend to soften and temper any radical tendencies of development." That is good to know because between Harris's description and Paul's illustration, Marsten has not faired well. 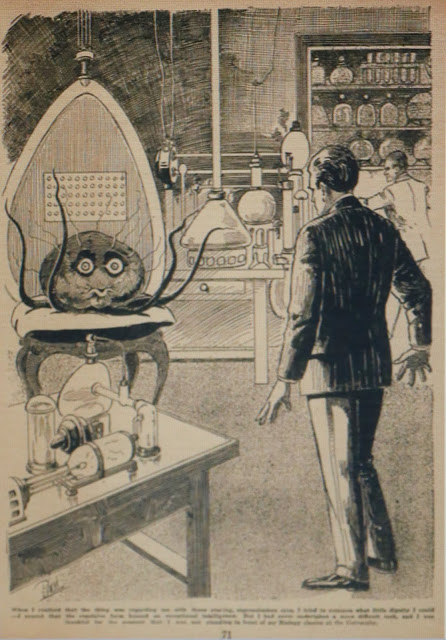 Once interesting note is that Dorothy admits to Caldwell that her maturity may not be the result of her experiences but rather the result of the initial injection, which also left her with a feeling of increased well being. Hopefully there will be no other side effects, as Marsten is eventually defeated and lovebirds reunited. Much like the "The Fate of the Poseidonia"​ Harris has provided a fairly standard pulp story. In this case we have a mad scientist bent on world domination, a brutish minion, a damsel in distress and a intrepid hero. I was surprised with how quickly Caldwell and Dorothy formed such a strong attachment but Gernsback subtitled his own signature work, (reprinted in this issue), Ralph 124C  41+ A Romance of the Year 2660, and both of the Harris works discussed here have the same strong romantic structure. To some extent I think that may be one of the factors ( as well as her gender) that lead Harris to try imbue more life into her female characters that some other pulp writers.

Keeping in mind remember that Harris would later call her work, stories in pseudo-science, Gernsback perhaps to add some appearance of verisimilitude to the speculations in Harris' story, inserted a sidebar containing a column from the UP (United Press) on Wallin's "Theory of Evolution" on one of the pages of the story.

A brief discussion of Wallin's work can be found here.
http://www.dnaftb.org/30/bio.html