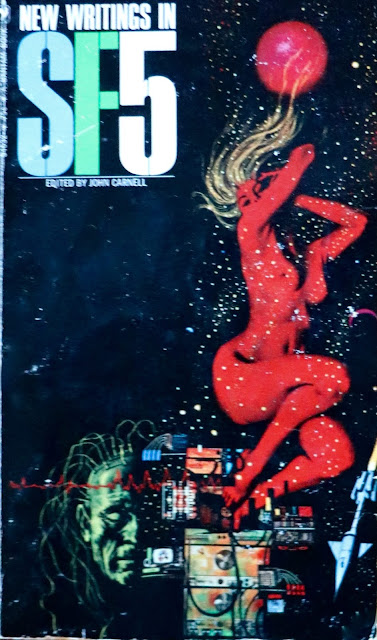 I hated this story, I was unengaged with the main character, a spacer Gerry Kaufman, who returns to earth from his first trip to Deepspace then whines about it. I also found the future history setting and plot uninteresting. So I will stop here, one thing I said when I started this blog was if I have nothing nice to say…, sometimes I am unsuccessful. But I try.

If you want to read some stories about rather odd conquests of space I suggest Larry Niven’s stories of Beowulf Shaeffer, “Neutron Star” is a great place to start or the many really enjoyable stories of Cordwainer Smith, I don’t have his books at the cabin but start with “Scanners Live in Vain” and “The Lady Who Sailed the Soul”. Or better yet find them all by reading everything he wrote. Moving on.

“The Expanding Man” by R.W. Mackelworth

from Carnell’s introduction, “ Not all science fiction stories require a complex plot or setting to make them acceptable. The following story, set in a park, is solely a conversational piece, but its implications prove far-reaching.”

The conversation is between Algie Ryan and a stranger he has met in the park. They are seated on a bench while Ryan recounts a somewhat incoherent story concerning his wife. While the stranger ( he provides the name Smith) pretends to lend a sympathetic ear, this is not what he is interested in. It seems that Ryan had spoken to another stranger, who subsequently vanished. Smith wants to know what Ryan told him. As he says “you are the kind of man who confesses, Mr Ryan. All confessions fun along the same line-a protest, a windy grumble with tensions running out in an acid stream.” (107)

Spoilers ahead
I am going to quote a bit more because this is a really well-written story. The description of the park, the back and forth between Ryan and Smith are beautifully realized.

Finally, Ryan describes his encounter, “ I sensed he wasn’t ordinary, that he was from out of this world, and I accepted it. Then, as I told my troubles he seemed to grow until he filled the whole of my view.” (108) As Smith is able to demonstrate Ryan means this literally. Because Smith and the previous stranger are aliens from two different factions and in contacting Ryan a rule have been broken. Ryan goes on “ “he took them on he grew larger with them…until he was enormous, a great skinful of my problems, of small household nags and big bank tyrannies. I thought he would explode.” “It is trick, a conjuring trick for ignorant natives! He broke every political agreement and every solemn pact of non-interference that’s ever been made in this sector of space-time merely by speaking to you.” Smith spoke like a small-town politician who hadn’t time to fix the ballot boxes and knew he had lost to the other candidate. The other side was breeding a nimbler race of mice.” (109)
From this description, it may seem like a fairly ordinary story of two extraterrestrial visitors vying for mankind’s support, but Mackelworth’s story is far more complex than that, and Ryan is very much an unreliable narrator. This story has, to me, more of a New Wave vibe than the other fairly conventionally plotted stories in this collection. But I absolutely loved it, well written, nicely plotted with great dialogue Mackelworth is another writer I will look for in the future. This collection seems to be it’s the only appearance of this story.

Professor Soames Chalcedony was a Philosophy Professor and spokesperson for a group advocating that longevity treatments be extended to everyone, at present, they are restricted to the rich and the influential. At 80 years of age, while still in good health, Chalcedony has opted to have his body submerged into the Mediterranean in a coffin. Here Chalcedony will live through a thousand years of dreams for each day his body takes to die. But his body has now been stolen for use in a treasure hunt. He is told “You are a mental pattern, a matrix of electrical fires taken from one mind and forcibly imposed on another. “ (118) in a few hours the original mind will reassert itself and Chalcedony’s mind will fade. They go on. “We are on a treasure hunt. We are after the fresh-laid egg of the firebird, The most beautiful object in the galaxy, and this is the only way one may be obtained. You were chosen to share this effort with us because our computer selected you as the philosopher most likely to succeed. It seems Chalcedony has been retrieved by four adventurers who found alien mind transfer equipment on a remote dead planet and decided to retrieve an egg to pay for longevity treatments. One has already died and a second has been brain damaged. The other two men have tried but failed to retrieve the egg.

To retrieve the egg one must assume the form of chariot-horse.

Chalcedony sees his new body as a reflection in a pool of liquid mercury “seeing the plump, rounded armless body, heavy tapered tail, snake-length of neck topped by a blunt and broad-nosed dragon’s head, the open mouth showing pointed tongue and diamond glitter of teeth in the wide wicked jaws. He looked at the two wheels of bone that supplied his locomotion as he moved away, at the massive bones which protruded from both sides of the muscular abdomen” (117)

He is on a planet where life is based on silicon, a world of crystal growths. “When he moved he gave off light, and he now realized this was true on every plant and animal on this sphere. His borrowed eyes knew and allowed for this. He was a humble vegetarian, with teeth of diamond and stomach of hydrofluoric acid, there were growths of prisms, seed carriers of crystal bells, fruits of gemmed translucency that were his food.” (122) If he succeeds Chalcedony will be rewarded with longevity treatments and a place on the crew if he wants it. But first, he must navigate a very strange landscape.

The story is not long but Green has offered a really beautifully depth of description for the silicon-based forest. Honestly, this is what I originally signed up for when I began reading science fiction. Utterly alien, aliens and strange planets based on totally different physical laws and an adventure to boot. All that it needs is a great cover by Frank R. Paul dripping with crystal forests, prism mountains and battling dragons with wheels. Again it looks like this collection was its only appearance.

With this title, and the description of the death of the sun in the review, (the story is falsely attributed to Mackelworth in the review), I am not too worried about spoilers, this is an okay story dealing with the discovery that the sun is about to go out, by the staff of an observatory. The plot revolves around what to do with the information some opt to publicize it right away and some including the head of the observatory wants to tell the president and other heads of state so they can prepare of the resulting panic. I said in discussing the first story in that collection that otherwise so so stories can be redeemed by the ending. “The Secretary went down a step and greeted the President with an urgency showing his held-down panic. “This is Professor Weiner,” he said, turning.
The President extended his hand.
The Sun went out.” (162)

Great stuff. I did not know what to expect from a collection put together by John Carnell but as I said in Part One once I had read a few I knew that I was in good hands. The overall quality and the sheer variety of plots really made for a great reading experience. I have a few more of this New Writings in SF collections and I will keep an eye open for more, as well as looking for other stories by some of the writers I discussed here.