I have been reading but not posting lately. One thing we have been doing is organizing the basement so we can turn the largest room which has been storage the entire time we have owned the house, almost 30 years into a library/rec room. This requires organizing the books in the basement. Some are mine; many are Helen's. Helen tends to prefer longer SF novels that are part of a series and more recent authors. My preference is short stories often older, but I want to see what else is out there. I have brought a number upstairs to my room so I can read some more current SF. That said, of the authors, I am going to touch on today. I have read two previously. This discussions many include minor spoilers. 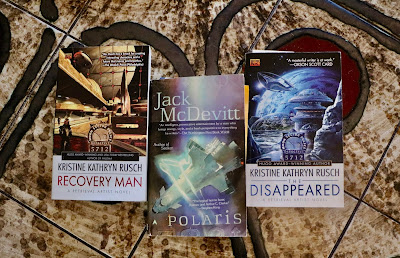 McDevitt has two main series, the one I intend to discuss here deals with the antiquities dealer Alex Benedict and his assistant and pilot Chase Kolpath. I read McDevitt's A Talent for War and loved it. The narrator is Benedict, and he is researching a number of the figures who participated in a war against an alien race, the Ashiyyur. I enjoy history and worked in archaeology for nine years, so the focus on research and the reconstruction of events fascinated me. The revelation at the end of the novel seemed fresh. I read another of his novels; it might have been Seeker, found it retreaded the same ground and moved on. I decided to try reading them in sequence and read Polaris. Chase is now the narrator. She and Alex have obtained artifacts from the Polaris a "Mary Celeste" of the spaceways where all six of the crew and passengers of a space ship disappeared, and the Polaris was found drifting with no indication of what happened. What did I like? The research aspect. Alex and Chase follow up with people involved in the events, all existing records and any other sources material they can find. They also visit the locations involved. Many people in this society update their memories to avatars who can be questioned. The avatars do not have memories covering the events on the Polaris, but they do provide a lot of insight into the characters involved. I think this comment from Wikipedia is fair. Certainly, I find the history of the minor characters are sometimes more interesting than the events of the main plot-line.

"McDevitt has a (probably unintentional) tendency to give the impression that his novels will go in one direction and then take them in a different direction. Or possibly his background is so well thought out, that throw away lines, or subplots, or minor characters, have enough information behind them to make the reader want to see their story as much as the main plot of the book. While slightly annoying, this is, I've decided, a strength of McDevitt's writing since it shows the depth of his created worlds.[3]"

One of the frustrating things about McDevitt's work, and Helen agreed with me here is the plotting shows a real lack of imagination. In Polaris, Alex and Chase are targeted by unknown assailants. In a world with high tech security and AI incorporated in homes and vehicles, they are almost killed three times when someone sabotages two of their aircars and a spaceship. Maybe some variety would be nice. Also, the final revelation, the explanation for the events on the Polaris and the later attacks on Alex and Chase did not make sense to me. I would suspect that McDevitt wanted to do a "Mary Celeste" type story but had trouble setting up the scenario and tossed a lot of stuff against the wall. In my mind, a lot did not stick. I will probably continue to read his works and his series on the space pilot Priscilla Hutchins, but my expectations are low. 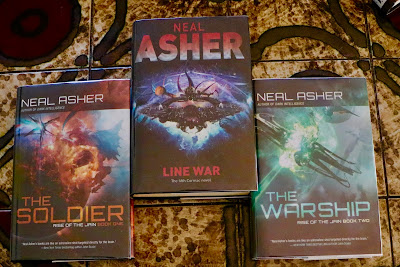 Helen had a ton of books from Kristine Kathryn Rusch's Retrieval Artist series. I read The Recovery Man, which is from the middle of the series and started the first book, The Disappeared. The Recovery Man involved the kidnapping of a scientist Rhonda Shindo and the efforts of her daughter Talia, police, lawyers involved with her estate and her ex-husband ( the Retrieval Artist of the series title) to find Rhonda. They also have to protect Talia from the machinations of the company Rhonda worked for. Rather than discuss this novel in more detail, I will discuss the theme of the two works I have looked at. Humans have encountered a number of alien races as they began to explore space. Often there is a conflict between the laws of the Earth Alliance and various the alien cultures. Humans who break the "alien" laws which operating in their spheres of influence are turned over to the aliens for punishment even if the acts are not a crime under Alliance law or the penalties are considered cruel or even incomprehensible by human standards. This requirement has created several very specific professions or organizations to deal with this requirement. There are "recovery men" bounty hunters who track down humans are considered criminals by alien cultures so they can be punished. Some organizations feel this is unjust and assist humans in disappearing, outfitting them with a new identity so they can avoid capture. Then there are retrieval artists who track down the disappeared. Rusch's plotting was better than McDevitt's novels, and the works are well written. But I am not sure the world she has created, of vast interstellar corporations, vindictive aliens, lawyers and police procedurals, is one that will engage me for long. (Having digested for a couple of days I found the plot revelations involving Rhonda's actions to avoid alien justice very disturbing.  The second book I started also had plot elements that I could see might trend in the same direction. Rusch is a good writer, but there is so much available to read I will definitely pass on this series.)  Helen enjoys the current batch of mystery writers mysteries more that I do. I am more of Dorothy Sayers or Sherlock Holmes fan, so SF that emulates the current treads in the mystery genre can be somewhat hit and miss with me. 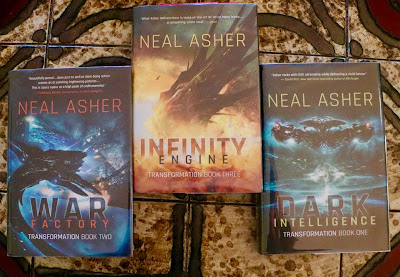 Asher has long been a favourite of mine. I prefer his Polarity setting to Bank's Culture. He is also one of the few writers of long space opera series I read at present. I love Reynolds Revelation Space and have read all his short stories in the series. Many more than once. But I have not read the novels yet. The latest series I have read by Asher are the three Transformation Books and the first two books in the Rise of Jain series. The last book is due out shortly, and I cannot wait. I have even come to love the covers, with their strange organic spaceships and have picked up remaindered and ex-libris hardcovers where possible. As Asher seems determined to, at least loosely, tie most of the Polarity novels and short stories together, I suspect I will be reading the entire series chronologically in the future. I will be looking into Asher's work in greater detail, but I have rambled long enough.

The Disappeared by Greg Bridges, The Recovery Man uncredited?

The Soldier, The Warship, Infinity Engine, War Factory, by  Adam Burn
Posted by Guy at 1:32 PM