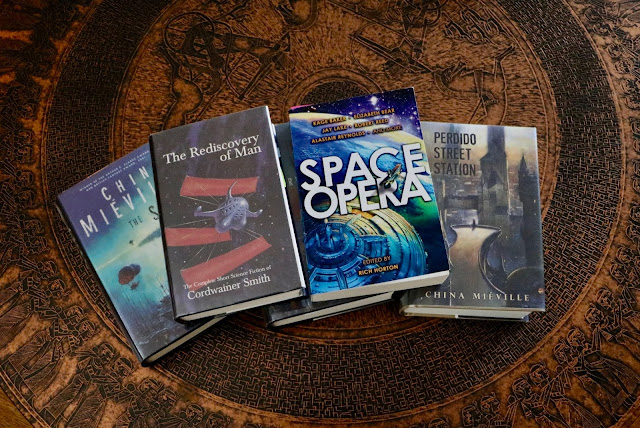 I have not been posting enough. I do find the process helps me organize my reading. Also as an aade-mémoire it is useful to be able to access these small snapshots of what I was reading and thinking at a particular moment in time.

Rich Horton, science fiction columnist, editor and a reviewer for Locus Magazine maintains an interesting review blog at Strange at Ecbatan. I often check in to see which authors he is featuring and was taken by his capsule discussions of the short fiction of Yoon Ha Lee.

I have read stories by Lee in the past and felt they were good. But this time I read two stories that really struck a chord.

The first was was "The Knight of Chains, The Deuce of Stars", which I read in the Horton edited anthology Space Opera. The first two paragraphs were enough to tell me I was in good hands.

"The tower is a black spire upon a world whose only sun is a million starships wrecked into a mass grave. Light the color of fossils burns from the ships, and at certain hours, the sun casts shadows that mutter the names of vanquished cities and vanished civilizations. It is said that when the tower’s sun finally darkens, the universe’s clocks will stop.

But the sun, however strange, is not why people make the labyrinthine journey to the tower. The tower guards the world’s hollow depths, in which may be found the universe’s games. Every game played among the universe’s peoples was once trapped in the world’s terrible underground passages, and every one was mined and bargained for by some traveler. It is for such a game that the exile Niristez comes here now, in a ship of ice and iron and armageddon engines."

Niristez was at one time a strategist for the High Fleet of the Knifebird, until she fled(?) from an unwinnable war which continues to this day. She has come to the tower to retrieve a game, but first she must deal with Daechong. He has been the warden of the tower for as long as it has existed and it is unclear just how long that has been.  Daechong likes to challenge visitors to a game for access to the tower. Sometimes they survive.

"Most people don’t first notice the warden when they meet him, or the rooms crowded with agate-eyed figurines, flowers of glass, cryptochips sliced into mosaics. They first notice the warden’s gun. It is made of living bone and barbed wire and smoke-silver axioms. It would have a stock of mother-of-pearl, if pearls were born from gangrenous stars. It has a long, lustrous barrel forged in a bomb’s hellheart. And along the barrel is an inscription in whatever language your heart answers to: I never miss."

Lee's focus is the game between Niristez and Daechong for access to the tower. I will not relate anymore you can read it yourself here.

Instead I will try to explain why I enjoyed it so much. Lee's language reminded me of the beautiful prose poetry descriptions you find in the works of Roger Zelazny or Samuel R. Delany. Niristez character seemed to be related to the legend haunted go-captains from the stories of Cordwainer Smith. And the concept of the games themselves carried a hint of Hermann Hesse's The Glass Bead Game where the rules, if there are any, and the structure of the game itself are ambiguous and ever changing. I am always attracted by connections, real of imagined, that I find between the stories I read. Lee offers plenty of them.

The second story  “Architectural Constants”  I read in Beneath Ceaseless Skies Issue # 2 Oct. 23, 2008. This is the story of the city, its architect and a period of flux.

"In any of these cities, you may mention the city or the architect, its restless Spider, and no listener will fail to understand which city you mean. The city lies at the intersection of leys that move through seas and continents, and stretch into the vastness beyond the visible stars. The city extends upwards and downwards in preposterous arches and chasm-spanning bridges.

If you listen during the silence following the city’s curfew bells, you can hear the click-click-clicking of the Spider’s slide rule as she checks her calculations."

The librarian Eskevan Three of Thorns is the first character we meet. He is tracking down a rumour that the Spider ascends. The Spider typically resides deep within the depths of the city. If she is roused, that means the foundations of the city need to be restructured.

The second character is city sentinal Attavudhra Nought of Glass; she is assigned to guard the city gate by the guard captain Yaz Five of Hearts. None are allowed to pass except the Spider and Yaz himself. The city itself is a place of shadows, mirrors, reflections and dreams. Often the characters try to alter their perceptions to see what is real or illusion.  Indeed one character we meet later, Riyen Nine of Knots, is not even complete as part of his body is missing/hollowed out. We are not told much about the city; it simply appears to be a dark and ever-changing place. In both stories, Lee using the language of geometry and mathematics frequently, and in this story, both city and characters seem multi-dimensional. It is also clear the ascension of the Spider is treated with some level of fear by the inhabitants as this will mean changes to the city and their lives.

Again this is a story I really enjoyed. I enjoyed the ambiguity of the setting and the imagery. It reminded me of China Meiville's Perdio Street Station and Italio Calvino's Invisible Cities with it's dreamlike cities and fantastic geometries. I could imagine any of them within a print by M.C. Escher. The characters themselves exist at some strange intersection between human, monster and archetype. In both stories Lee has provided the type of fantastic science fiction I often find appealing and I have purchased Lee's collection Conservation of Shadows on the strength of them.