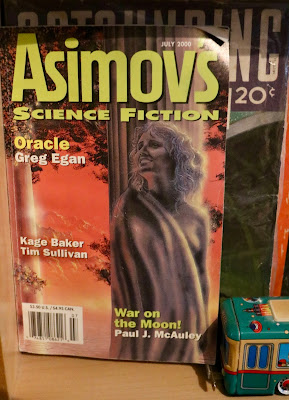 "The Great Economy of the Saurian Mode" by Michaelene Pendleton. Published in Asimov's Science Fiction, July 2000. I have been collecting notes for posts for some time. But I decided to finish this one, for two reasons. I enjoyed this story; it features a strong female protagonist and reptilian aliens that reminded me of the dinosaur Deinonychus publicized by the work of John Ostrom.

Also, my thoughts about this story lead me to think a lot about animal-human and alien-human partnerships. Sadly yesterday, we had to say goodbye to Shaun, the oldest of our three dogs, and so as you might expect, this dynamic has been foremost in my mind as his health declined in the last week.

I have provided a link to my other blog with some photos and remembrances of Shaun should you be interested.

Pendleton's story takes place on Earth. Based on the technology, I would think it was set in the near future. The Earth has become part of the Dyarchy. We are told very little about the Dyarchy or how humans currently live within it. There is an indication that some level of out-migration is taking place.  Pendleton tells us that Earth's position within the Dyarchy is as a frontier world where they can drop riff-raff. The story begins at the Iron Thing Triathlon. Sonia Vasilyeva is running a team of three Sorsh, the reptilian aliens I mentioned earlier. Kharkh, Selin, and Yhss are all males of the warrior class. The four of them have worked together for years capturing criminals and terrorists. Now having bought out their contract, they hope to win big and buy their own property. The Sorsh work with Sonia because, "by some kink in galactic chemistry, I have the right combination of pheromones and emotional stability to run Sorsh, to bind to me so that my well-being is their first concern." The Sorsh are sentient beings, Sonia notes they do not read or write either language, I assume she means her's and their's not because they cannot but because it is beneath their warrior status. As the story proceeds, it is clear that Sonia is as devoted to the well being of the Sorsh as they are to her. At the triathlon Sonia is approached by a government security agent, Nick OCallan. He wishes to hire the team to capture a Navajo gunrunner who is hiding in the Dark Canyon Primitive Area in Utah.  Sonia initially refuses, but after some bargaining, she not only gets more money that the event prize, but also Dyarchic Freespace Passports which she receives immediately. The team insists on completing one more event so we see them in action against another reptilian team Wasash Reds; the Ferroven Blues armoured hairless bears from a heavy gravity planet and the Hurove Greens aliens that combine aspects of insect, mammal and cephalopod traits and are hard to focus on when they more. Then accompanied only be OCallan the team heads out.

I quite enjoyed the story. It seemed to have a lot of elements that have appeared in science fiction for decades. The triathlon had a bit of the gladiator/arena aspect common in science fiction. There were aliens modelled on dinosaurs, which I have discussed on my other blog. See the link to Dr Dale Russell below.There was the anti-government sentiment reflected in Sonia's limited interactions with the female park ranger. I did wonder if these interactions between the only women in the story also reflected a bit of a sisterhood. Because one way this story did differ from a great deal of the science fiction stories I read back in the day was in having a strong female lead. 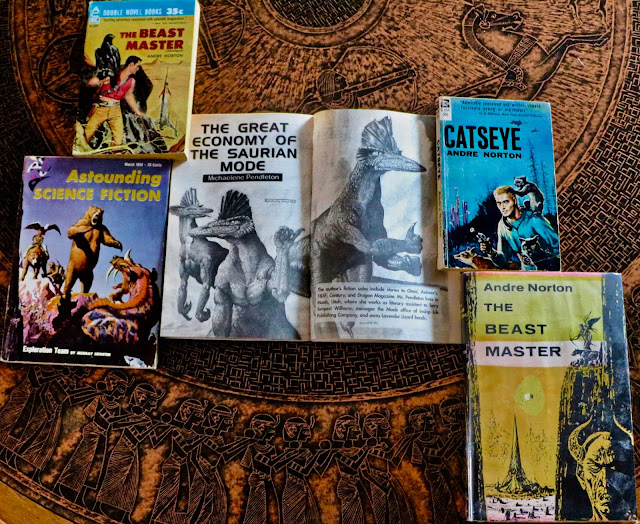 As I said earlier, one element that interests me in science fiction, as one might expect from someone who started by reading works of Andre Norton, is animal-human and alien-human partnerships. Pendleton works hard to make us understand that the Sorsh are sentients, not animals. Sonia mentions that around the fire at night, they ask the same questions that earth philosophers ask but couched in terms of their hunter-warrior culture. Every morning they conduct the religious rites specific to the warrior class. The element that causes me to link human partnerships whether it is with aliens or animals is communication. Communication in these partnerships, unless you postulate universal translators or telepathy is always complex. Sonia states verbal communication is difficult and seems to rely on voice, scent and hand signs. It is the hand signs that are of particular interest to OCallan. Pendleton does avoid telepathy, a common mechanism in science fiction, as seen in Andre Norton's works, Anne McCaffrey's Pern series or James H. Schmitz's Telzey Amberdon stories with the crest-cat Tick-Tock. This story did remind me of the Schmitz Hub stories "Trouble Tide" and "The Demon Breed" in which a female protagonist, Nile Etland works with her giant mutated otters, Sweeting and Tikkos using human language and hand signs.

I have devoted some time to this story because I quite enjoyed it. She worked with a number of the tropes of the genre to create a good action story. It was not overly complicated but with enough there, for me at least, to mull over. Sadly she did not seem to have left a large body of work as seen on ISFDB website and she passed away last year. There are more details here.

I do wonder if the animal-human and alien-human partnerships we often see are an out growth of the YA origins of  much science fiction? I would enjoy hearing your thoughts.

I will leave you with some Jim Kjelgaard covers while you ponder this, Swamp Cat was included, because having only dogs would hardly be fair, would it Max. Yes there are a lot of guns, sigh. 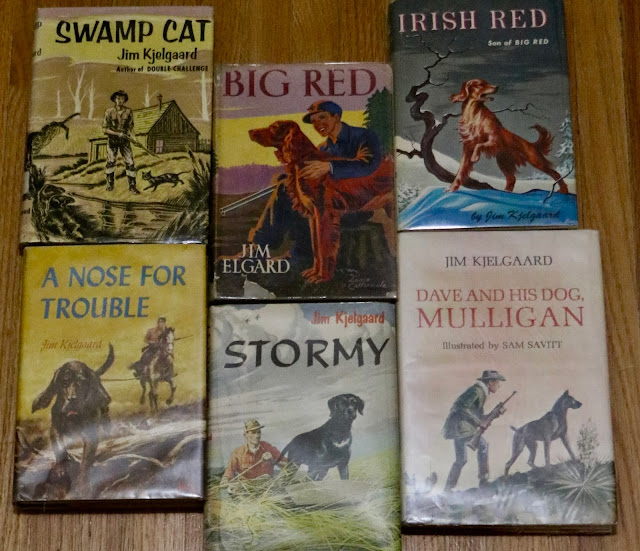