The City of the Living Dead Fletcher Pratt, Laurence Manning, 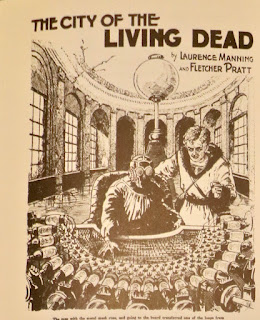 This is a post I have intended to write for over a year. In my reading, I encounter texts that reawake my interest in certain aspects of science fiction. This may be a particular author, theme or period. I have mentioned in previous posts how influential the gift of two volumes on the history of science fiction by Davis Kyle were.

I was leafing through one of these volumes when I saw the illustration for The City of the Living Dead by Fletcher Pratt and Laurence Manning. A quick search of the ISFDB indicted where to find it and off I went. This discussion will include spoilers because I want to examine the theme in some detail, and I assume most people will not read it anyway. There is a certain level of racism, as was typical of the period so you are warned. The Anglesk have dominated the world we will eventually find, and there are mentions of barbarians of various colours, including white. 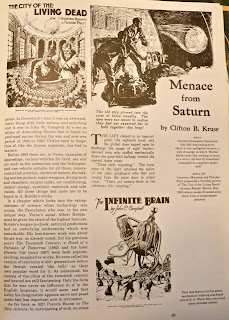 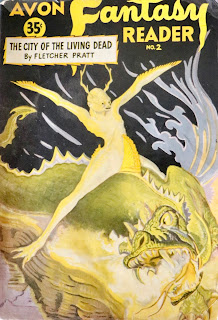 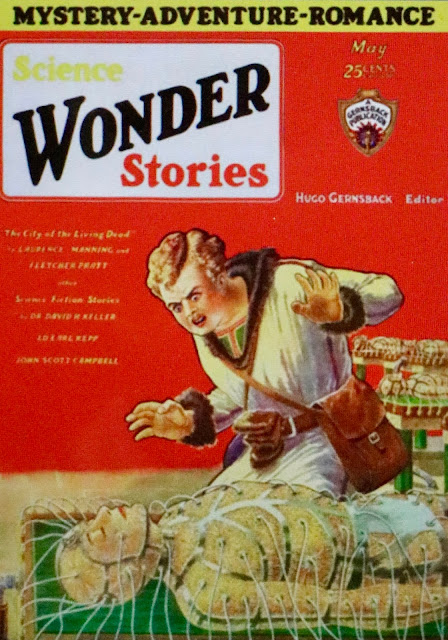 Our story begins in Alvrosdale, an isolated valley in the mountains. Many young couples have gathered in the Hall of Assembly (formally The Hall of Power). The year is 4050A.D., and the couples are preparing to leave the valley via gliders to seek land in the wider world. The valley has been isolated since "Demon Power" destroyed the larger civilization and reduced the inhabitants of the valley to a simple agricultural existence. Before the couple can leave, however, they must attend a lecture by Hal Hallstrom, the first man to leave the valley and return in many years. Hallstrom is now quite old, but as a younger man, he managed to climb through the mountains to the plains below. Here he finds the abandoned homes of the people who lived here before civilization collapsed. The residents of the Alvrosdale attribute this collapse to the "Demon Power." Initially, Hallstrom's trip is quite uneventful, there are packs of wild dogs, but he does not seem to be in any great danger. There are none of the mutants, evil cults, hair raising escapes etc. that so often populate stories of this kind.

Hallstrom finds a deserted city and enters the one lighted skyscraper. There he finds a room full of what at first glance appear to be giant silver ingots.

"I stood in a long hall with sunlight streaming through the glass walls and reflecting back in dazzling radiance from row on row of great  ingots of silver.

"So much wealth neither I or anyone in this dale has ever seen. Yet there was something curious about those ingots, when I looked at them a second time, for each one was laid on a table by itself, and each seemed rather a close winding of many wires than a solid piece of that precious metal. Dumb with astonishment at the sight , I stood for a moment, and then approached one of them, thinking that they might be a dream wrought for my undoing by the Demon Power. I noted that the form of the silver winding had, from a little distance, a certain likeness to that of a man, from one side of which many of the wires were collected and twisted through holes in a slab of stone on which the form lay."

But of course, they are living people. Hallstrom searches further and finds a man in the metal mask seated in front of a control panel. This individual, over 100 years old, now seems to be the last conscious individual in this city. While he dismisses Hallstrom as a white barbarian, he does tell him the history of the civilization, whose remnants Hallstrom sees around him. Through the invention of the radio, Anglesk culture came to dominate. Once people worldwide could speak to each other, war ceased.

"In elder ages men quarreled, this group and that, and fought destructive wars in which thousands were slain by the use of guns, which hurled great pieces of steel that rent and tore asunder all that stood in their path. But among the English and the colonies of the English were many great scientists. These scientists designed Machines called Radio, fashioned so cunningly that a man had but to speak in them to he heard afar by many men in other lands. Now in the days of which I speak, the English spoke into their Radio and their tongue spread across the whole world. Then the quarrelling of nations ceased, for there is no quarrel that may not be settled by simple words when men may speak these words understanding to one another."

Hallstrom's "Demon Power" the power from the earth's core ushered in a period of industrialization that saw machines take over most aspects of society. Machines not only controlled transportation and manufacturing but also art and entertainment. Humanity began to rely on fictional adventures to give meaning to their lives. The people Hallstorm encounters in the ultimate manifestation of this trend. Surgeons exposed the nerves of participants and connected them to adventure machines via the silver wires. The bodies also receive nourishment via the silver wires and can survive indefinitely. Anyone choosing to undergo this procedure relinquishes all assets to the government and for most the procedure is too complex to be reversed. As more and more people began to undergo this procedure, the machines are left alone to run things. It seems that this abandonment is what leads to the destruction of civilization rather than war or environmental collapse.

The man Hallstrom meets was once such a dreamer. But he was removed from the system by the last of the surgeons to maintain the system and switch the adventure tapes. He admits, however, that he can only do this for a few friends.

I found this interesting on several levels. This story, published in 1930, contains no mention of computers or robots. But it is, despite the rather crude surgical intervention required, an interesting example of the application and perils of virtual reality. Also, Pratt and Manning are interested in societal change, not the action-adventure so prevalent in the pulps of this period. This story seems, thematically, to explore the same issues concerning the rise and fall of civilization as H.G. Wells The Shape of Things to Come (1933) or Last and First Man by Olaf Stabledon (1930). I don't expect the predictions that science fiction writers include in their work to be accurate. But I am always interested in where their fictional thought experiments lead them and what it tells us about the cultural landscape in which it was conceived.

Reading The City of the Living Dead also encouraged me to learn more about the authors. I hope to prepare a post shortly on Manning's The Man Who Awoke, which investigates not only virtual reality but also themes like the generational conflict around resource use.