Murderbot Diaries by Martha Well, plus a couple of new arrivals


Before I discuss Martha Well's Murderbot Diaries I wanted to share the covers of two books I received today. Cheesy as some may find it I love Laumer's A Plague of Demons, I also love this cover by Carlos Ochagavia. Really, does it get better than demon dogs trying to maybe gnaw on human brains encased in robots. 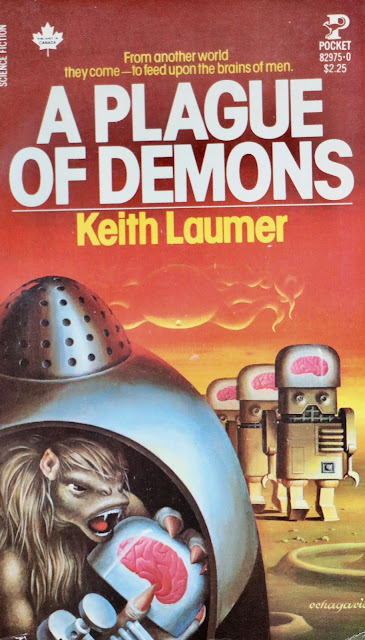 My discussion of A Plague of Demons appears here;
https://ajaggedorbit.blogspot.com/2015/09/a-plague-of-demons-keith-laumer.html 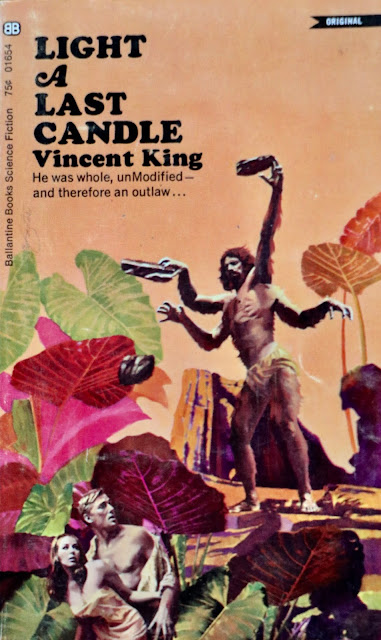 https://sciencefictionruminations.com/2017/03/14/book-review-new-writings-in-sf-9-ed-john-carnell-1972-harrison-coney-sellings-king-et-al/
I noticed the bookseller that had A Plague of Demons also had Light a Last Candle by King, with a pretty cool cover by Robert Foster. The discussions on Good Reads sounded intriguing if a bit mixed so the four armed diaper guy joined my collection. 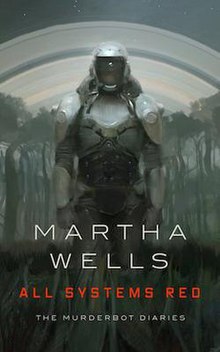 And now to Murderbot

I  really enjoyed The Murderbot Diaries. Murderbot is a fun character. Murderbot's various adventures take place across a a number of locations within the Corporate Rim. Most of the citizens we meet, we do not meet many, are people working in space in an economy geared to exploiting existing worlds or exploring for new resources at least within the planets and space stations where most of the action takes place. The society in the Rim is dystopian with many citizens indentured or leased to corporations, criminals or the mega-wealthy. The story feeds us enough detail that we can envision the societies and culture overall without becoming so dense that we bog down in back story and infodumps. Instead, the details are inserted into the narrative, emerging as needed without appearing forced or slowing down the action. These are action stories with a very good pace. They are also novella length which as means they are quick reads

Wells understands the human condition and offers a vision of how bleak the society she has extrapolated is for many people, via the experiences of Murderbot a security unit assigned to a mapped expedition on an unexplored planet. SecUnits are a merger of machine and cloned human parts created for tasks too challenging to be handled by even augmented humans or smart machines.  "When constructs were first developed, they were originally supposed to have a pre-sentient level of intelligence, like the dumber variety of bot, but you can't put something as dumb as a hauler bot in charge of security." (Artificial Condition) This would require human supervisors and slow down the unit's reaction time, among other things.  Therefore constructs have some freedom of choice but only within the limitations set by their programming and governor module.

Wells, through Murderbot can find some humour or at least irony in rather dire situations, something I am increasingly challenged to do. Indeed Murderbot views the interactions of the humans with resignation, cynicism, paranoia and occasionally humour. Murderbot does come across as jaded, disengaged and very world weary. Also interactions with humans on a personal level are unwelcome and quite stressful. Indeed the first paragraph of All Systems Red provides a valuable insight in Murderbot's dilemma.

“I could have become a mass murderer after I hacked my governor module, but then I realized I could access the combined feed of entertainment channels carried on the company satellites. It had been well over 35,000 hours or so since then, with still not much murdering, but probably, I don't know, a little under 35,000 hours of movies, serials, books, plays, and music consumed. As a heartless killing machine, I was a terrible failure.” (All System Red)


One thing that Wells did that works for me in this series is avoiding some of the standard science fiction terms for artificial life or machine intelligence.  The term bot is used extensively for machines that operate independently often prefixed by the function; examples include bot-driven transports, cargo bots, hauler bots etc.

We have augmented humans, but no cyborgs, Miki in Rogue Protocol is usually described as a human-form bot, although the word robot is used a couple of times generally as a derogatory term. ART, the research transport vessel in Artificial Condition, is described as a bot, although it has the characteristics of what would be called an AI in many science novels. I found this freeing; I did not immediately feel I knew the attributes or roles of these characters based on the term. Instead, I learned how they fit into the range of artificial life forms by their actions within the storyline.

I am becoming increasingly interested in depictions of mechanical life, artificial intelligence, robots, drones and all the other manifestations of artificially created sentient beings. So this series was something I quite enjoyed. Indeed I read All Systems Red and hesitated to read the other books for fear I would not enjoy them as much. But when Tor made the series available for download for free, I could not resist. So I will say now I loved the entire series and am awaiting the next addition to Murderbot's story, which I will buy immediately. The setting and action reminded me a bit of C.J. Cherryh's Allliance-Union books, which is never a bad thing.