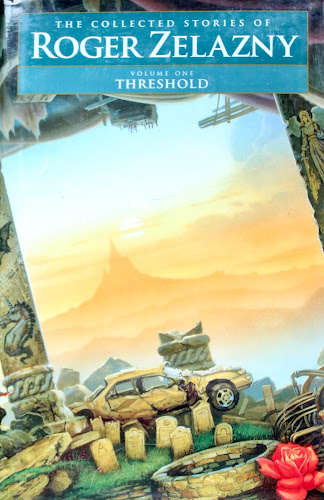 “As he was cast over the edge, he was able to turn and look upward. Falling, he saw a dark figure in the sky that grew even as his eyes passed over it. Of course, he thought, he has finally looked upon the sunrise and been freed … Wings folded, his great, horned countenance impassive, Morningstar dropped like a black meteor. As he drew near, he extended his arms full length and opened his massive hands. Jack wondered whether he would arrive in time.”
Jack of Shadows - Roger Zelazny 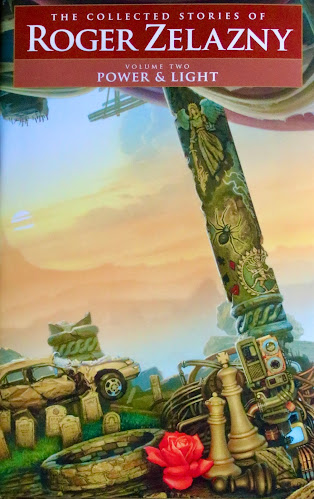 “So feathers or lead?” I asked him. “Pardon?” “It is the riddle of the kallikanzaros. Pick one.” “Feathers?” “You’re wrong.” “If I had said lead’ . . .?” “Uh-uh. You only have one chance. The correct answer is whatever the kallikanzaros wants it to be. You lose.” “That sounds a bit arbitrary.” “Kallikanzaroi are that way. It’s Greek, rather than Oriental subtlety. Less inscrutable, too. Because your life often depends on the answer, and the kallikanzaros generally wants you to lose.”
This Immortal - Roger Zelazny 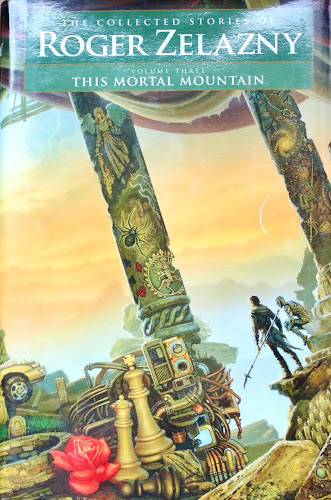 “Did you ever look back at some moment in your past and have it suddenly grow so vivid that all the intervening years seemed brief, dreamlike, impersonal—the motions of a May afternoon surrendered to routine?”

Doorways in the Sand - Roger Zelazny
When things seem meh, like they are now I continue to read new works or new authors but I also delve in old favourites, both books and authors for a little stability. Zelazny is one of those authors for me. The latest reread, that lead to my picking up these NESFA collections, started over at the Lovecraft Ezine. I discovered that they have run stories based on Zelazny's A Night in the Lonesome October, during October for several years.
These included several rememberances of Zelazny by his son Trent. I will include a link to only one of them here.
https://lovecraftzine.com/magazine/issues/2013-2/issue-27-october-2013/introduction-to-issue-27-by-trent-zelazny/
My own discussion of A Night in the Lonesome October appears here.
https://dunwichhorrors.blogspot.com/2019/11/new-eldritch-tomes-and-night-in.html
I was surprised and delighted that so many people had enjoyed this work, the last novel he published by himself, as much as I did.
“I took Jack his slippers this evening and lay at his feet before a roaring fire while he smoked his pipe, sipped sherry, and read the newspaper. He read aloud everything involving killings, arsons, mutilations, grave robberies, church desecrations, and unusual thefts. It is very pleasant just being domestic sometimes.”
A Night in the Lonesome October - Roger Zelazny
One of the joys of this book is that you read one chapter, most are quite short, per day in October ending on Halloween night. It's hard to do I could not resist reading several chapters at a time and then going back to the appropriate day. I don't see a Kindle edition but it's not too late to get yourself a hard copy for Oct. 1st.
“If you ever loved anything in your life, try to remember it. If you ever betrayed anything, pretend for a moment that you have been forgiven. If you ever feared anything, pretend for an instant that those days are gone and will never return. Buy the lie and hold to it for as long as you can. Press your familiar, whatever its name, to your breast and stroke it till it purrs.”
Creatures of Light and Darkness - Roger Zelazny
Exploring more about the significance of A Night in the Lonesome October for other people lead me to reviews of Zelazny's work in general so I though I would try a few of the NESFA collections which include essay's and such as well as the stories. The essay in volume one, "Before Amber" by Zelazny's childhood friend Carl B. Yoke, is incredible. They became friends in grade 2 and the relationship continued their whole lives. This essay repaid my investment in spades.
There is a nice discussion of the books with a full wrap around version of the Michael Whelan covers here.

“Such
times are rare, such times are fleeting, but always bright when caught, measured, hung, and later regarded in times of adversity, there in the kinder halls of memory, against the flapping of the flames.”
A Night in the Lonesome October, Roger Zelazny
Zelazny seems to have been not only a very influential author but a good friend and person and I read a number of tributes to him. I have provided a link to Martin's here because I think it gives you a sense of the man himself.
https://georgerrmartin.com/about-george/friends/in-memoriam-roger-zelazny/
Posted by Guy at 3:23 PM