The Halloween Tree by Ray Bradbury, slight spoilers and this will appear on my HPL site as well. 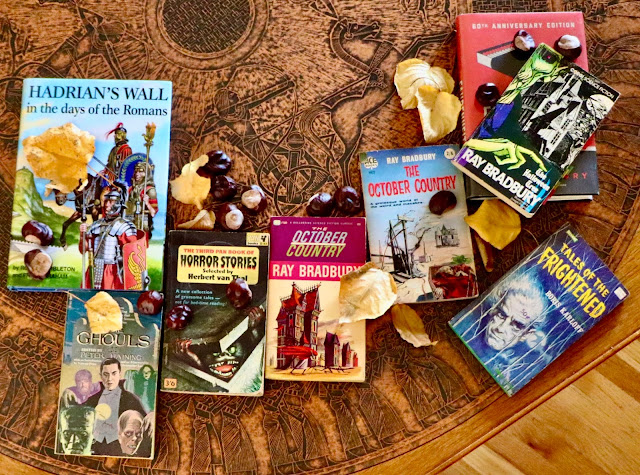 I was reading Roger Zelazny's A Night in Lonesome October as my Halloween read, but as always, I could not read a chapter a day. Instead, I rushed ahead then read all the short stories based on this theme from the various Lovecraft eZine Megapacks. This meant that once I had decorated and left out Wagon Wheels and hand sanitizer for the little ghouls and goblins (about 12 kids and assorted parents), I needed something to read.

Ray Bradbury was one of the most formative authors I read as a child/young adult. And there on the shelf was a title I had never read before The Halloween Tree. No one does Halloween, autumn or childhood like Bradbury. And no one illustrates Bradbury like Joseph Mugnaini. 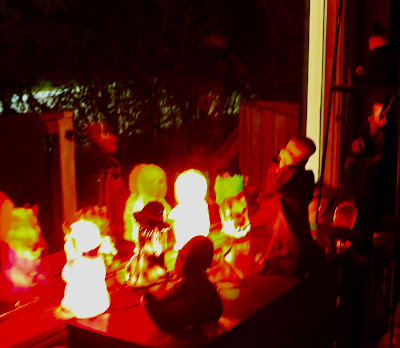 "Shrieking, wailing, full of banshee mirth they ran, on everything except sidewalks, " (4)

The story itself is simple; eight boys go out trick or treating in a small Midwestern town, pure Bradbury. But the boy Pip (Pipkin), who is the most vital, energetic, of the group, the very image of unbridled boyhood is missing. He has told them to go ahead, and he will catch up. But it is obvious something is not right with Pip. As loyal friends, the group follows Pip's instructions and visit the biggest, scariest, spookiest house in town.

"So, with a pseudopod thrust out here or there, the amoebic form, the large perspiration of boys leaned and made a run and a stop to the front door of the house which was as tall as a coffin and twice as thin." (19)

Here they meet Carapace Clavicle Moundshroud, probably the scariest, creepiest, spookiest person in town. They see the Halloween Tree hung with strange jack-o-lanterns and embark on a tour of Halloween's history on a giant kite formed from old carnival posters.

"And then down they sailed off away deep into the Undiscovered Country of Old Death and Strange Years in the Frightful Past..."(54)

"And the million tiger-lion-leopard-panther eyes of the autumn Kite looked down, as did the eyes of the boys."(55) 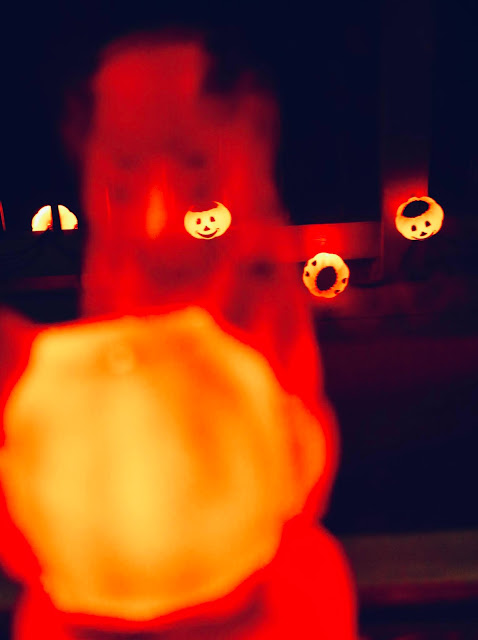 One and on, I read past cavemen and mummies, both Egyptian and Mexican. The Druids appeared the Roman Legions attacked, witches stirred black cauldrons and burned for it. The great cathedral of Notre-Dame appeared resplendent with gargoyles.

And finally, '"Quiet as milkweed, then, soft as snow, fall blow away down, each and all."

Like a bushel of chestnuts, their feet rained to earth."(81)

This was my childhood, not the reality of it but some of the sense and feel of it. The books I read, the stories I was told, the movies I saw. The paper decorations, the pumpkins, cats and cornstalks decorating the houses I walked past. The autumnal sound of dry leaves underfoot, the smell of apples and the first cold brush of winter buried amid the horse chestnuts and multicoloured Indian corn. And I realize now it had continued to be my life. Reading Bradbury, I understood that the things that interested me as a child are largely the things that interest me today. I still love rocketships, dinosaurs, and books with mummies, witches and werewolves on the cover. I have been fortunate that Helen shares many of these interests; we have visited Hadrian's Wall, York Minster Cathedral., Saint Mark's in Venice. When I finished, I felt grateful that in a trying year, I had the joy of reading this book and this author. I became aware that I can enjoy my life, the people around me and my pursuits in peace and security and how rare that is. 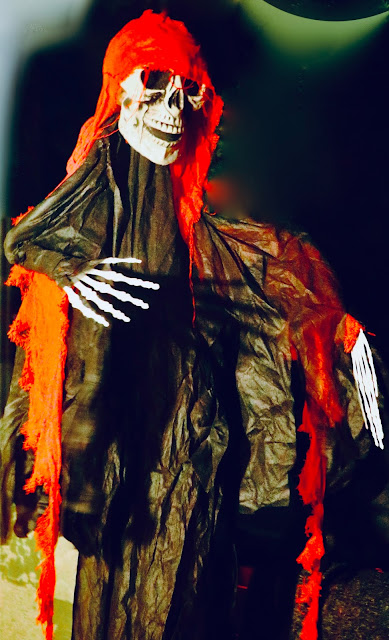 Having finished The Halloween Tree, I looked for another Bradbury work to at least flip, though before bed. Obvious choices would have been his collection The October Country or short stories like "The Illustrated Man" or "The Pillar of Fire." But the images in one of my favourite books called to me instead.

"The autumn leaves blew over the moonlit pavement in such a way as to make the girl who was moving there seem fixed to a sliding walk, letting the motion of the wind and the leaves carry her forward. Her head was half bent to watch her shoes stir the circling leaves. Her face was slender and milk-white, and in it was a kind of gentle hunger that touched over everything with tireless curiosity. "(3) Fahrenheit 451

I am posting this on both Jagged Orbit and Beyond the Walls of Sleep, cause I can.