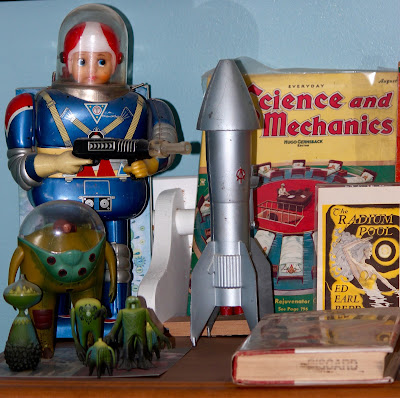 "Zeed’s golden eyes seemed to dim and tarnish. “We all inhabit a vast dark,” he repeated, “in which there is neither rhyme nor reason.”"


All quotes in this post are from Mutation Planet by Barrington J. Bayley read at Weird Fiction Review Your Non-Denominational Source for The Weird.

A couple weeks ago I found a webpage called Weird Fiction Review, as someone whose interest in science fiction has always skirted the weird tales of authors like Howard Philip Lovecraft, Clark Ashton Smith, Donald Wandrei etc., authors who produced works clearly identifiable as science fiction, I was intrigued. What I found were some stories that were clearly science fiction even if some of them were quite unusual, including the quirky and whimsical "The New Abyss" by Paul Scherrbart (1863-1915).

But a story that really grabbed me was Mutation Planet by Barrington J. Bayley originally published in 1973 in a Roger Elwood anthology Frontiers 1. I have read Bayley’s novel Pillars of Eternity, and several short stories including "All the King’s Men", which appeared in Judith Merrill’s anthology England Swings SF, and "Bees of Knowledge" in Wollheim’s 1976 Year’s Best Science Fiction. I liked them all, the short stories in particular interested me because both dealt with the problems involved in understanding alien cultures.

I have always been interested in aliens in science fiction but they are often not all that alien. Larry Niven’s Puppeteers (possibly my all time favourite aliens) are in the final analysis, a manifestation of the all too human attributes of caution and cowardice, and his Kzin the human qualities of impulsiveness and violence. C.J. Cherryh gives us the Hani bipedal lions, Frank Herbert's The Dorsal Experiment offers the Gowachin giant frogs, etc., and often these aliens are all too easily understood because they act from all too human impulses and tendencies. Would Bayley again offer something different, you bet.

We start with the Dominus surveying his world wide empire while travelling along a continent long roadway he built himself from materials extruded from his own body.

“Filled with ominous mutterings, troubled by ground-trembling rumblings, the vast and brooding landscape stretched all around in endless darkness and gloom. Across this landscape the mountainous form of Dominus moved at speed, a massed, heavy shadow darker than the gloom itself, sullenly majestic, possessing total power. Above him the opaque sky, lurid and oppressively close, intermittently flared and discharged sheets of lightning that were engulfed in the distant hills. In the instant before some creature fed on the electric glare the dimness would be relieved momentarily, outlining uneven expanses of near-barren soil. Dominus, however, took no sensory advantage of these flashes; his inputs covered a wider, more reliable range of impressions.”

However, the peace if it can be called that is due to be disturbed because a spaceship is landing. The ship contains two humans, Eliot Harst, his assistant Alanie Leitner and aliens from three different planets, Balbain, whose people created the ship, Abrak and Zeed. The ship is on a voyage of discovery surveying different planetary systems and the life forms they contain. Originally Balbain piloted the ship by himself but in the course of the journey he has invited the scientists of other races to join him. The narrative begins after the expedition has been on Planet Five for six months and they have just completed experiments on one of the life forms. They were only able to capture some of the extremely well "armed" life forms with the apparent assistance of Dominus. The planet itself is racked by incredibly violent weather systems and the native lifeforms use energy from the constant lightning strikes to metabolize the elements they need from the scanty vegetation, the soil and air. Indeed the inhabitants of Planet Five are unique in the experience of the members of the expedition.

To avoid spoilers I will stop there but I do want to provide some of my own thoughts on the story. I want to note that it marred by unnecessary sexism, despite the fact that we are told Alanie’s IQ is higher that Eliot’s she is relegated to role of assistant and love interest, the following passage is one of her most prominent appearances in the story.

Alanie gave a deep sigh that strained her full breasts voluptuously against the fabric of her smock. “Well, what now?” she asked. “We’ve been here six months. I think we’ve solved the basic mystery of the place. Isn’t it time we were moving on?”

Really, come on, couldn’t someone just edit out any sentences combining the word breasts and voluptuously?

Other than that I did enjoy the story, I always like to see what elements appearing in a story connect me to other stories I have read, the gigantic Dominus and his dark forbidding environment immediately reminded me of William Hope Hodgson’s The Nightland, the expedition itself A.E. Van Vogt’s The Voyage of the Space Beagle and Balbain’s recruitment practices carried a whiff of Olaf Stapledion’s Star Maker. As I am big fan of Charles Darwin and have an interest in evolutionary theory I was also quite interested in the discussion of the evolutionary history of Planet Five and the inheritance of acquired characteristics, (the theory of the inheritance of acquired characteristics is the subject of renewed interest in the field called epigenetics.)

If you are interested there is a good article on epigenetics here:

For a relatively short story there is a lot going on and the alien human interactions offer lots of plot twists. I certainly intend to read more of Bayley’s work, I have been collecting his novels for some time but I now will also be looking for his short stories as well. I also have to say that the Weird Fiction Review has a lot of interesting content to offer readers of science fiction.

"An image came to his mind of the endlessness of space in which galaxies seemed to be descending and tumbling, and the words: an unfathomable darkness without any common ground. "
Posted by Guy at 8:24 PM