Golden Age Optimism and the Lords of the Starship 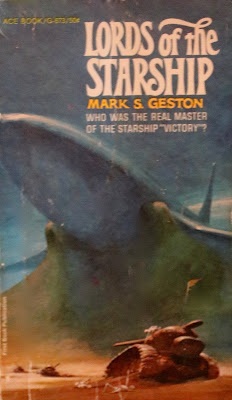 "Yes,"Getting the country back on its feet," is the usual phrase. Although I am, at times, quite confounded as to how I am to recreate a world that I know nothing about and one which might"—Limpkins's voice dropped slightly—"exist only in legend." (15)

"But the ship's primary purpose will not be one of simple transportation, but that of a Cause, the thing about which all of the dormant hopes of our nation can crystallize.
"And here is the trick: the ship will betray the people for their own good."(26)

Lords of the Starship

As I enter my 60's, I realize I have been reading SF for what must be approaching 50 years. I started with SF intended for children in my school library in Windsor. Titles that spring to mind, John Keir Cross's The Angry Planet or Miss Pickerell On the Moon, she also goes to Mars. I graduated to Robert Heinlein, Andre Norton, Arthur C. Clarke, Isaac Asimov's robots and Ray Bradbury, who I loved, still do, but even then he was a bit of an outlier, what after all was I to make, as a white kid who lived across from a Detroit in flames, of "The Black and White Game" (1945) from The Golden Apples of the Sun. 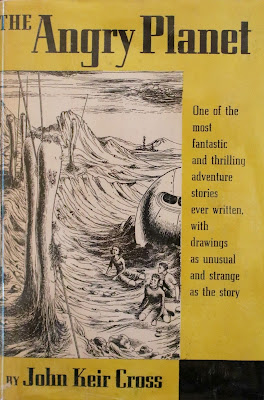 Even at the time many of the titles were old, although I was oblivious to this, even after reading Heinlein's Rocket Ship Galileo with its Nazi base on the moon. I did not realize that these books and their visions of the future were often 15 to 20+ years old. SF was by no means my only reading, as a geeky kid, books were a refuge, myths, mysteries, historical novels aimed at teens, adventure stories, even the occasional sports novel were gist for the mill, although SF has remained my greatest love.

As I look for like minded enthusiasts on the web, I have been interested in reading about their youthful experiences with SF. One I found was the late Bud Webster, who I have mentioned before on my blog. A link to his columns on SF authors and anthologies appears under Handy Resources, I recommend starting with Anthopology 101: The Best of Time and Space

"But the library was sanctuary for me. Nobody would chase me, nobody would yell at me, and best of all, nobody there would rag me for reading books. I'd have stayed there forever if I could have. It was quiet, cool, and it's where I became addicted to books, both as artifacts and because of the content.

I was probably all of nine years old when I first found the thick, heavy collections of stories edited by Conklin and Healy & McComas for the first time. But there they were, that pair of behemoths: Adventures in Time and Space (ed. Raymond J. Healy and Francis McComas, Random House 1946) and The Best of Science Fiction (ed. Groff Conklin, Crown 1946). They changed my life, and without a doubt altered the way I read science fiction, and I wasn't the only one."

Another fellow reader is  James Harris with his blog Auxillary Memory and his great lists of SF by the decade. I have enjoyed many of this posts but I think his post, Who Still Reads 1950's Science Fiction is a great start, capturing his thoughts on SF. His comment

"The kind of reader I’m trying to identify is different. Science fiction was their childhood religion, born again into faith in the future, like the theological have a faith in the past. "

is one I want to discuss more in a future post.

But the main impetus for my current post is a post by Ralph E. Vanghan, discussing the effect reading Lords of the Starship by Mark S. Geston had on him. What struck a chord with me was this quote,

"At the time, I was a futurist. I did not really think I would see flying cars by the Year 2000 (though I hoped so), I did believe that the ills of the world would be solved through technology and science, that starving millions would be fed by scientific farming, that the world would embrace peace once everyone's standard of living had been raised by ubiquitous technology and that the the frontier of human experience would be expanded by colonization of the solar system and journeys to the stars beyond. Unfortunately, the future turned out not to be quite what I had envisioned. I'm no longer a futurist, not even much of an optimist anymore, and quite often I find myself thinking, Where are we going so fast" 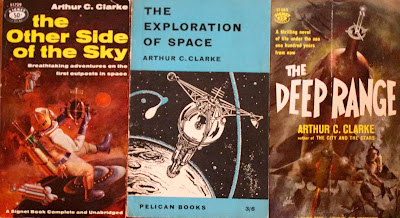 I don't think I considered SF my childhood religion, and like Ralph I did not have a time table for the delivery of my flying car but like Ralph i did think science and technology would begin to improve the lives of people worldwide. That a rational approach would break down the barriers of social status, nationalism and race. This idea could be found in science fiction. Arthur C, Clarke was one of its greatest proponents, in the Deep Range we not only farm the oceans, but learn a deeper connection to other species. In his non-fiction books like The Exploration of Space or novels like The Sands of Mars and A Fall of Moondust mankind begins the often perilous exploration of the solar system. 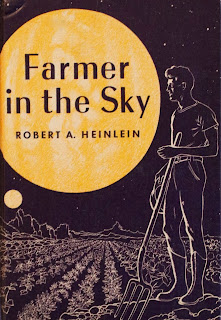 But the SF I read was not always a literature of optimism, Heinlein saw us repeating the errors that lead to the American Revolution in The Red Planet, The Moon is a Harsh Mistress and a personal favourite Between Planets, even in his more optimistic Farmer in the Sky, the colonists on Ganymede discuss the fact that the overpopulated Earth will want to send too many new colonists, but are told that the inevitable war on Earth will prevent this. Like many SF writers, Andre Norton embraces a cyclical view of history, with civilization repeatedly rising and falling. In Star Rangers the Galactic Empire is collapsing. Nuclear war has occurred in both Sea Siege and Star Man's Son 2250 A.D. The Stars Are Ours sees a persecuted band of "Free Scientists " escape a tyrannical police state for space and even when we get out into the universe we are relegated to acting as mercenaries in Star Guard. 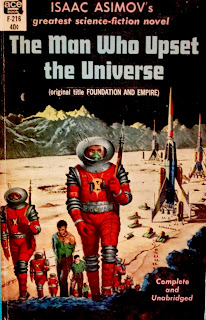 In Asimov's Foundation, the most optimistic outcome is a Dark Age lasting 1,000 years rather than 30,000 years and Lathan Devers the trader, instrumental in saving the Foundation, in Foundation and Empire, later dies in its slave mines. Ray Bradbury offers us the dystopia of Fahrenheit 451 or the Mars of the Martian Chronicles in which, in a parallel to the settling of the Americas, the native Martians are eventually wiped out by contact with the Earthlings, who then launch a nuclear war on Earth.

My feeling of optimism, now largely lost, came from the world itself. My wife a few years younger than myself and also a SF reader said the same thing when I asked her. My father and my uncles on both sides of the family had gone from poor farm boys in the depression, into military service in WWII, and had come home to steady jobs in the trades or factories of southern Ontario. (Canada also had a version of the GI bill which provided money for education, low-cost mortgages and  businesses loans.) 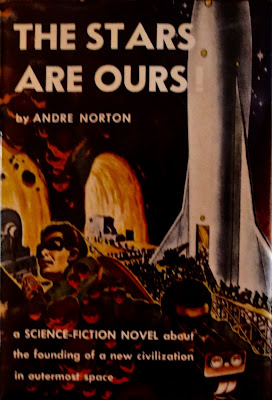 The interstate highway system in the USA started in 1956 and similar infrastructure projects were carried out in Canada. The post war economic expansion lead to sustained economic growth, high levels of employment, the expansion of the suburbs and what is sometimes called the Golden Age of Capitalism. (see link below) Vaccines and improved public health practices and screening meant polio, TB and more exotic diseases like smallpox were eradicated or at least controlled. (I spent a year as an infant in a sanatorium being treated for TB, this was a big deal) Yes there were the race riots of 1967 and the Vietnam war, but also the anti-war and civil rights movements and even a bit of environmental consciousness (in elementary school I wrote an essay on the pollution of Lake Erie). In Canada, 1967 was the Canadian Centenary featuring the Expo 67 World's Fair. (One year later my wife's family would move into their new house, which actually had running water, another big deal during winters in the Canadian Prairies). 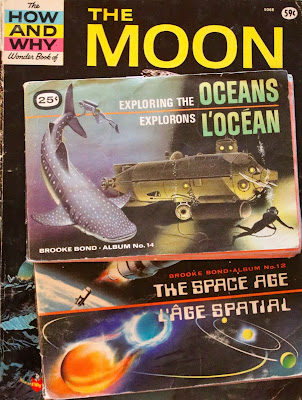 The first news event I remember watching on TV was the landing of Alan Shepard after his suborbital flight in May 1961 as part of Project Mercury, and I had a plastic space centre with rockets, a launch pad and missile launching platform. How and Why books told us about the sciences.  We could collect cards from tea leaf packages with pictures about trees, birds, animals and the exploration of space and the oceans. The world, even the solar system was our oyster. A rational approach and advances in science and technology would lead us to a bright future. Things were not perfect at that time, not in North America, and certainly not in the world. But the way seemed clear.

Now that short period of unsustainable prosperity after WWII has engendered some oddly selective nostalgia on the part of a lot of people and the possibility for a bright new science-fictional future seems more remote every day.

SF may have shown me a variety of possibilities, both good and bad, but it was the apparent progress we were makings as a race that gave me hope for the future.

Out of the Mouth of the Dragon, by Mark S. Geston

This might have been he future we envisioned but with bigger televisions.


In Part Two I will give my thoughts on Lords of the Starship by Mark S. Geston.