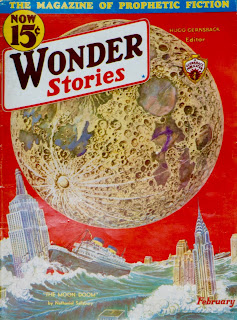 This summer I went to the cabin with all sorts of books to read and ideas for posts. And as normal the experiences at the cabin, both good and bad, overwhelmed everything else and nothing happened here at Jagged Orbit.

So I wanted to post a bit of an update on some to the things I have read and observed over the last few months.

First I was very sorry to read of the passing of Peter Nicholls.

"My father, Peter Nicholls, has died aged 78. He was an academic and literary critic, whose 1979 work The Encyclopedia of Science Fiction mapped the landscape of the field and remains the definitive reference workThe encyclopedia quixotically aimed at detailing every film, author and theme in the western tradition of science fiction. The entries were accessible and witty. More than a collation of facts, the encyclopedia passed judgments and advanced an argument: that science fiction was the literature of change, making it the truest literary response to the 20th century. " from

While Peter made a number of contributions to the field, it was indeed, as the editor of the 1979 The Encyclopedia of Science Fiction that I will remember him. I purchased my copy used and, while I rushed to buy the new hardcover editions of The Science Fiction Encyclopedia (1993) and the companion volume, The Encyclopedia of Fantasy (1997) when they were released, I have always kept my tape enhanced copy of the original. Paging through it introduced me not only to new authors, (and unlike the new editions, including the online version that I urge you to use, there were the occasional photos of authors Philip K. Dick, Hugo Gernsback, Ian Watson, Brian Aldiss, Joanne Russ among others, as well as book and magazine covers, movie and tv stills and other eye catching tidbits) I really enjoyed the theme articles. These allowed me to explore Cyborgs, Time Paradoxes, History in SF, History of SF, End of the World etc. leading me to even more stories and authors. It even had an entry for Dante.

So I do want to acknowledge the importance of Peter Nicholls in my experience of SF.

You can also check out Peter's entry at the link below. 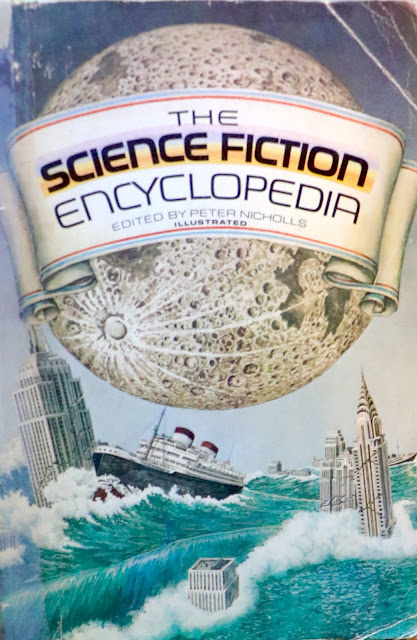 Some time ago I joined the Kickstarter campaign for 2001 An Odyssey In Words so I was quite happy when this handsome copy arrived with my name among the supporters. 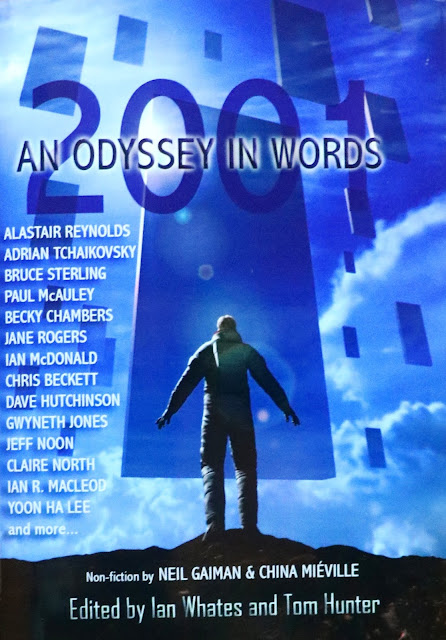 The Arthur C. Clarke Award has joined forces with NewCon Press to publish a new short story anthology that marks Sir Arthur's centenary and showcases new and exclusive work from some of the best science fiction writers in the world today.
A Story in 2001 Words

The Arthur C. Clarke Award is famous for its annual redefinition of that elusive term ‘science fiction,’ and Sir Arthur was always adamant that while the award may be named for him, it shouldn’t be styled on his work.

We wanted to make sure that the scope of the anthology was as broad as the fluid definition of science fiction for which the Clarke Award is renowned, while still retaining a direct acknowledgement of Sir Arthur’s own work.

The solution? A collection where every story has all the scope and freedom to imagine that an author might possibly want, but where the word count had to be precisely 2001 words (and we had rules about authors playing clever games with super-long story titles, just to make sure)."

I have only read a few stories so far, my favourites would be "Childhood's Friend" by Rachel Pollack and "Golgotha" by David Hutchinson. It is obvious that the authors in this collection are familiar with Clarke's body of work and that one can expect the stories to range widely in subject and focus.

I am always looking for new websites and posts where I can see what works and subjects interest other people about SF and perhaps introduce me to topics I will chose to explore in more detail. One such website is at the following link.

The first post I read was on Perry Rhodan a series I knew about but had never read. Looking over this website I also found a nice post with an editorial by Hugo Gernsback and entries on a number of SF artists including two of my favourites Bruce Pennington and Peter A. Jones. In a funny (spooky?) coincidence two days after reading the post we were laying in bed with our computers and my wife said "I just got an email from Jan, she wants to know if you are interested in Perry Rhodan because she just saw some at Fair's Fair". And it turns out I was. 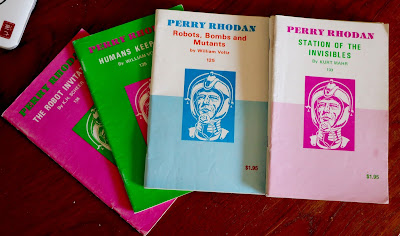 Another new arrival was the next/last volume in Jonathan Strahan's Infinity series, Infinity's End. I have quite enjoyed the series, my only quibble would be the various size changes that have occurred over the course of the series. This is not the only series where this has happened but it always ticks me off, I have to shelve these, help me out here people. And really I have never understood the need for the large format paperback period. That said I have dipped in and liked everything I read so far with good stories by Seanan McGuire, Linda Nagata, Peter Watts and especially Foxy and Tiggs by Justina Robson. A fox and velociraptor security team working for an AI managed hotel to solve a murder, come on, I have to stop now and read it again. 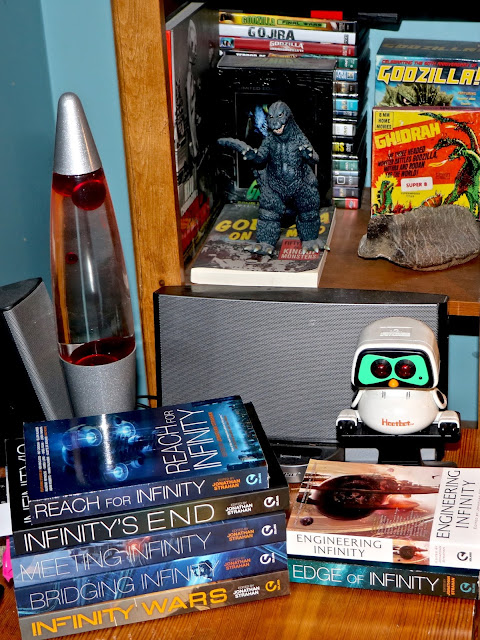 from The Encyclopedia of Science Fiction (1979)

- This marvellous cover by Frank R. Paul Feb 1933 , is the basis for the jacket illustration for the US edition of this Encyclopedia. Adapted by Dave Christensen, typography by Al Nagy.