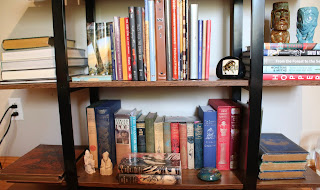 I am continuing this exercise in bookshelfery in part because it is (for me)  an interesting examination of how my mind works and the type of associations that have created my metal map. This shelf contains mostly art books. The central portion is devoted three artists, Shaun Tan, an Australian artist who has produced a number of children's books. They deal with childhood, colonization, immigration and the environment and are well worth seeking out.
https://www.shauntan.net

It also houses Nick Bantock's work. Bantock, a British artist, living in Canada, is best known for The Griffin and Sabine Saga. 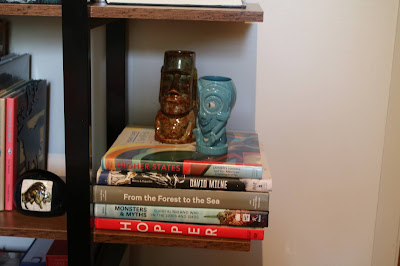 There are some current art books and some Tiki figures on the left. Helen and I are redoing part of our basement as a mid-mod game room/library so they might end up there in the future. I also have a Players cigarette tin I picked up at a yard sale because I remember my father smoking them briefly when I was a child. He wore a similar outfit when he was in the RCN. The big books on the right include illustrated copies of The Voyage of the Beagle and The Origin of the Species by Darwin. There are also two shelves in the basement about Darwin, his contemporaries and evolutionary theory in general. I started reading the Origin in high school, and it has stuck with me. The second real vacation we took was to the Galapagos. As previously mentioned, Helen is a wonderful woman. 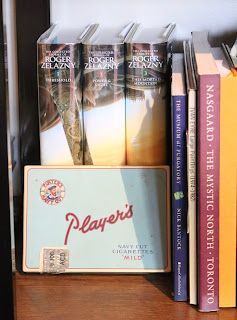 Lastly I have works devoted to the Canadian Artist Ivan Eyre. I saw his show Ivan Eyre: Personal mythologies/images of the milieu: figurative paintings, 1957-1988, while working at the U of C for the summer. I went  to the show every week it was there, I believe it as free on Tuesday. Later I worked in the Esso library which had his mammoth painting Floodwood hanging on the wall. I moved to Gulf Resources and had a print of his painting Red Hill, which appears on the cover of the Woodcock book, in my office. I have also been lucky enough to obtain some of his smaller works for my study. I will not include photos, artist hate that. And ditto on my previous remarks about Helen. So it seemed his work followed me, and his imagery has stuck with me since then. One repeated image he uses are figures, often horn blowers silhouetted along the edges of tall buildings. Helen and I are often reminded of these figures as we move about in the city. 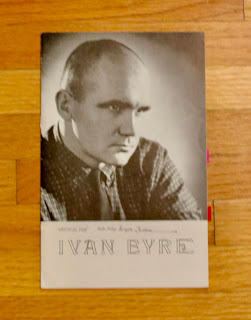 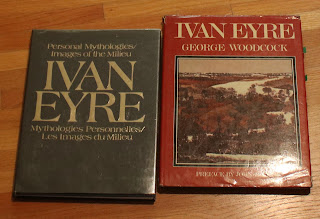 http://www.artnet.com/artists/ivan-kenneth-eyre/floodwood-usq4x1azha9nu4sJk5B1Qw2
There is also a bison paperweight I picked up on a trip we took to Drumheller this week to have lunch with friend. Bison have a particular resonance with me. When I was in archaeology, I often worked with faunal remains from fur trade posts or buffalo jumps. I also assisted the faunal curator in dismembering seven bison for comparative collections. (All were accidental deaths within Elk Island Park.)
I had hoped to finish but stuff happens, the NHL Draft, some very circumspect social events, insomnia, the front retaining wall, (now finished,yeah) i.e. life. So the last shelf will have to wait.
Posted by Guy at 11:44 AM