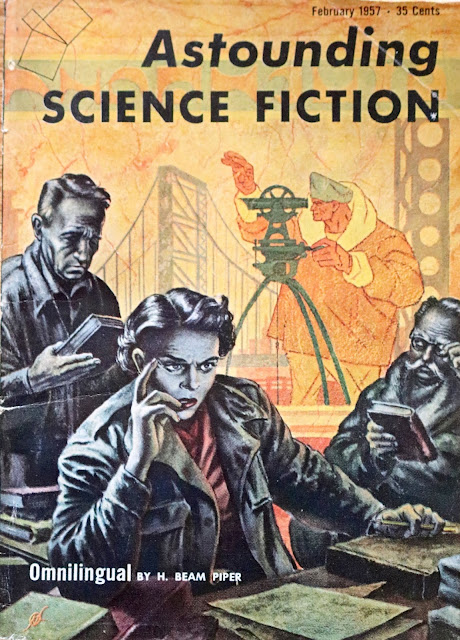 While H. Bean Piper’s story "Omnilingual' has been reprinted a number of times I do wish that it had been included in the SFWA anthology series The Science Fiction Hall of Fame. I still consider volume one to be one of the most important SF anthologies ever published, the other volumes are also quite good. When asked what single book I would suggest to a friend’s nephew as an introduction to SF it was volume one I picked. (For more on the creation of this series read Bud Webster’s Anthopology 101, essay “The Books That Saved SFWA” this essay does not appear in the free online content from this volume listed in Handy Resources, however Webster's book Past Masters available through that link, does contain an essay on Piper). While I feel most of the contents have aged well I think replacing Lester del Rey’s sexist “Helen O’Loy” or Robert Heinlein’s anti-union and technologically silly  “The Roads Must Road” would only strengthen the work.

Piper, born in 1904, was largely self-educated, wikipedia furnished the following quote which I love “he obtained his knowledge of science and  history "without subjecting myself to the ridiculous misery of four years in the uncomfortable confines of racoon coat." He began publishing in 1947, in Astounding Science Fiction and continued until his suicide in 1964. He was initially known as a short story writer but began producing novels later in his career. Like many other pulp/genre writers of this period he also wrote mysteries probably his most well known is Murder in the Gunroom (1953).

Many of the genre writers of the period embraced the cyclical view of history and this informs Piper’s Terro-Human Future History series, one of the clearest example of this, is his novel Space Viking. Other novels in this sequence also demonstrate his tendancy to mine history for his plots, Uller Uprising is a retelling of the Sepoy Muntiny against the British East Indian Company in 1957 India but with lizard like aliens. In the Cosmic Computer an earth colony supports itself by selling surplus military equipment abandoned after a interstellar war, which I suspect was at least partially inspired by the cargo cults of Melanesia which became really well known as a result of the occupation of Melanesia in WWII. A Planet for Texans, which postulates an earth colony where the assassination of active politicians can be deemed justifiable homicide (no comment) won the 1999 Prometheus Award, a Hall of Fame Award for Best Classic Libertarian SF Novel, which underlines Piper’s libertarian sympathies, another common trait among SF authors to this day, but also his interest in how societies organize themselves politically.

Other series include the Little Fuzzy books which deal with the question of whether a species of cute little aliens can be considered sapient (I have not read these) and the Paratime Police Series. The Paratime books deal with a society who, having used up all their own resources, have discovered a method to travel to and exploit alternative time lines. Contact with inhabited timelines is regulated by Paratime Police. Possibly the most well known work in this series is Lord Kelvin of Otherwhen where a Pennsylvania State Trooper, Calvin Morrison is accidentally transported to an alternate Pennsylvania which has been settled by the ancestors of Europeans who migrated east rather than west and ended up in North America. Since their technological development is less advanced we have a fairly common SF trope of the influence of a modern man transplanted into the past.

While H. Beam Piper is not normally listed among SF writers of the first rank it is interesting to note that wikipedia has listed a number of novels by other authors based on his work. They list six novels based on the Fuzzy series, nine based on the Terro-Human series and six based on the Paratime series. While part of the allure may be that many of Piper’s works are in the public domain I suspect the authors also enjoyed the novels and wanted to expand on or play in Piper’s universe.

"Omnilingua"l is the story of a Federation government expedition to Mars. The Martian race died out some 50,000 years ago and the expedition is exploring a number of the building they left behind. As the story opens the expedition has uncovered a series of sculptures and other representations of the Martians but no bodies. They have also uncovered a number of books with silicon based pages. The expedition has three archaeologists as well as a number of other naval and civilian staff. The head of the archaeologists is Selim von Ohlmhorst described as (Turco-German) an expert on the Hittites, Martha Dane an experienced archaeologist that von Ohlmhorst recruited for the expedition and Tony Lattimer an archaeologist forced on von Ohlmhorst by the political machinations of his university. Martha has devoted a portion of her time to trying to translate the Martian language but in the absence of a Rosetta Stone type artifact that translates the unknown language to a known language no one on the expedition has much faith that she will be successful. No one is more outspoken on this issue that Tony who says, “Three parties, if Martha can tear herself away from this catalogue of systematized incomprehensibilities she’s making long enough to do some real work” (16). She does and the expedition does score some successes. In a university or museum type building they find a series of dioramas depicting the history of the Martians and in a cruel twist of fate it is Tony who later uncovers the remains of the last Martians to die when their civilization collapsed. I will stop here.

Why do I think so highly of "Omnilingual", I studied archaeology and worked in the field for nine years so I was predisposed to enjoy it based on the plot. But while Piper shows many of the tendencies of SF writers of the time, a Libertarian world view, a love of military history and conflict based plots, and a predominance of male protagonists, in Mary Dane we have an example of a female protagonist rarely featured in a story published in 1957. Dane is a powerful enough character, that we have a (fully clothed) female scientist depicted on the cover of the February 1957 issue of Astounding Science Fiction which is why I searched out a copy of the magazine. To prove my point I include the rather misogynist advertisement for the Science Fiction Book Club which appeared on the back of this issue. 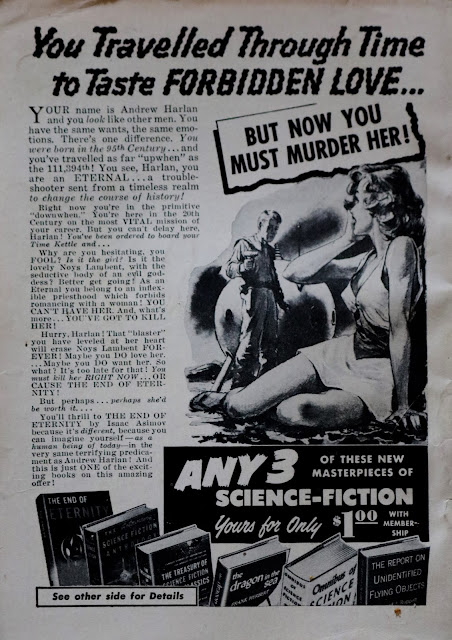 I also loved the 1950’s vide of the cover it reminded me of the advertising and movies of the period. Piper is certainly not perfect, in the same story Sachiko Koremitsu is described as a "girl ordinance officer", but she is a female officer on a multinational crew, another rarity at the time. There is also a lot of smoking and a lack of basic protocols around unknown contagions, ah the good old days. 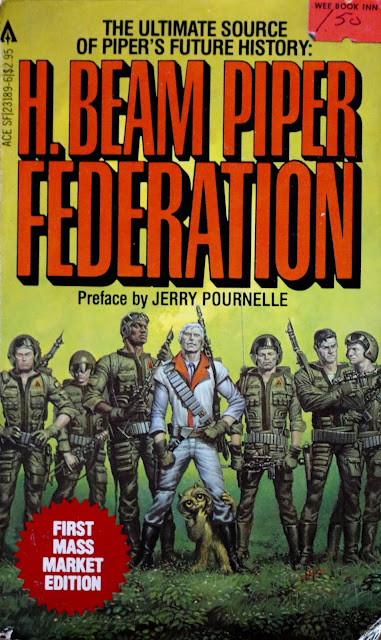 You can find the story in this collection or at full text sites like
http://manybooks.net/titles/piperh1944519445-8.html

I enjoyed the puzzle aspect of the story and the resolution, that scientific data, including the periodical table of the elements would aid in translation. Piper is not invent this idea, one earlier example is George O Smith’s “The Lost Art “ published in Astounding Science Fiction, December 1943, ( I found it in A Treasury of Great Science Fiction, Volume 2 edited by Anthony Boucher) in this story the main characters discover an engineering handbook in a Martian power station that provides scientific data that could have made for an interesting story. Instead it devolves into one of the poorest stories I have read in a long time as passages in which the discoverers fiddle with a Marian device they find (endangering many lives, which they know, but choose to disregard) alternates with passages in which the original Martian engineer teaches his son about the operation of the station. The entire story seems to have been written so it can end with the idea that people never read the manual. Thanks Doug, I think, for bringing this story to my attention, if nothing else the two stories illustrate in my mind the highs and lows of SF of the period. 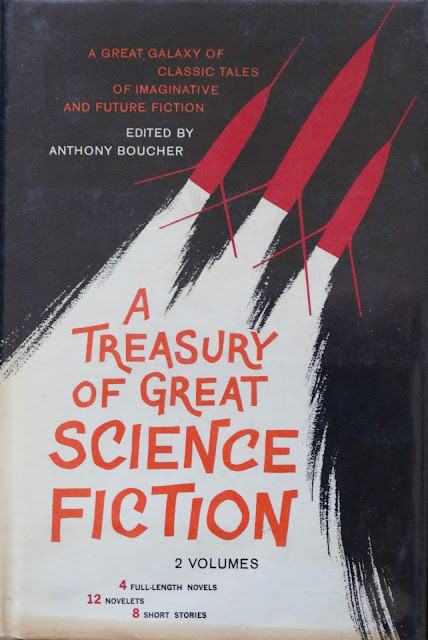