Frank Herbert #2, The Eyes of Heisenberg 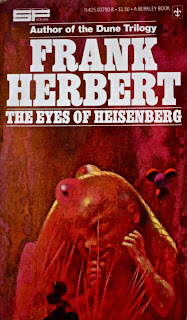 "They are the power that loves and cares for us" p13

When I decided to look at Herbert's work, I began to pick up editions with different cover art, I enjoy comparing how a book is presented to the buying public so here are different views of the The Eyes of Heisenberg, I think my favourite is David O'Connor's  treatment of the globe shaped control centre of the Optimen triumvirate.

In The Eyes of Heisenberg Herbert gives us the story of a static society threatened by change. At present, society is ruled by a sterile immortal class called Optimen, (both men and women) the rest of society are called The Folk who can be divided into Sterries, the majority of people whose status is maintained by an ever present prophylactic gas and a select few who are designated for breeding. They provide the genetic material from which all future generations including Optimen are created. Embryos are vat raised once they have been cut, altered by sub cellular engineers to ensure no mutants, monsters or unique individuals that deviate from the standard average are present. Three of the Optimen form a ruling triumvirate whose membership periodically changes, and the rest can monitor events remotely as desired. All societal change has been curtailed including things like sea farming or space exploration. References to death, infirmity even worn equipment are avoided when talking to Optimen and the term doctor is not used. Many of the Folk have imbued the Optimen with a quasi divine status similar to saints and wear medallions or other tokens to invoke their aid in acquiring the status of breeders.  However there is resistance in the form of secret organization called Parents Underground and there is also reference to a Optimen Cyborg war in the past.

The current story begins when Dr Thei Svengaard i.e. a sub cellular engineer is preparing to "cut" or alter the embryo of Lizbeth and Harvey Durant. He is upset because problems with the embryo have required him to enlist the assistance of a specialist Vyaslav Potter and also because, as allowed under Public Law 10927, the Durants have asked to watch the cut something that almost never occurs. Once the Durants arrive it is obvious that they are not innocent breeders that can be dissuaded for exercising their rights. They have a highly developed ability to read Svengaard's body language and communicate with each other the same way, they also have had access to forbidden literature and information the Cyborgs provide to the Parents Underground. Svengaard does not realize this and has them taken to the viewing room while he prepares for the procedure. It is during this procedure that things begin to go wrong. "Svengaard swung the meson microscope over the Durant vat, adjusting for low amplification to minimize Heisenberg interference. One look could not hurt." p 13 But of course it does. " He stood frozen at the viewer as a thing seen only eight previous times in the history of gene-shaping took place within his field of vision. A  thin line like a distant contrail reached into the cellular structure from the left. It wound through a coiled-coil of alpha helices, found the folded ends of the polypeptide chains in a myosin molecule, twisted and dissolved." p14. The Durant embryo is no longer standard and the Durants, Svengaard and Potter are drawn willing or not into a conspiracy against Optimen rule. 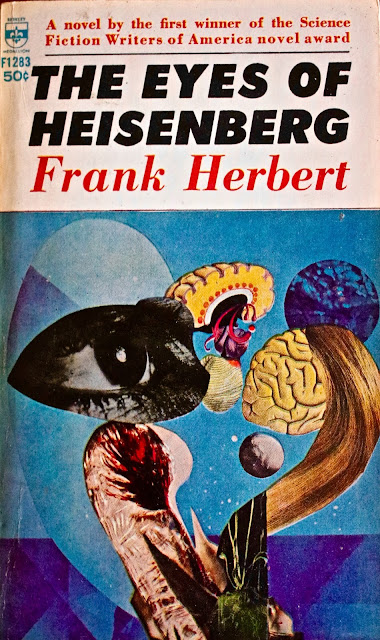 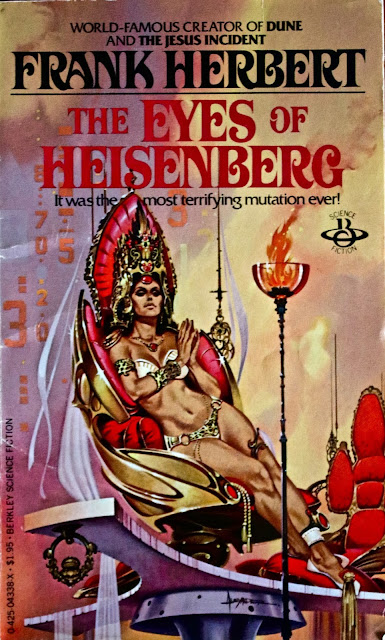 A number of the themes or ideas that Herbert will develop in other stores are here such as an interest in genetics engineering and a stratified society.  Many can also be found in his classic Dune sequence, the Durant's powers of communication and "body reading" seems similar the abilities of the Bene Gesserit, it is revealed that the oldest Optimen is 80,000 years old and that Optimen rule has resulted in stagnation similar to the extremely long rule of Leto II Atreides in the Dune novels. The conversion of a long lived ruling class to a religious or mythic status also occurs in Dune. While I often complain about the excessive length of current SF novels at 156 pages The Eyes of Heisenberg could have been longer. I did feel that the society created was complex enough that I would have liked to see it described more fully, I also felt the Optimen Cyborg conflict both historic and current, and the Cyborgs in general could have benefited from a more detailed treatment. But I quite enjoyed the novel and found upon rereading portions for this post there were levels of complexity I missed the first time. 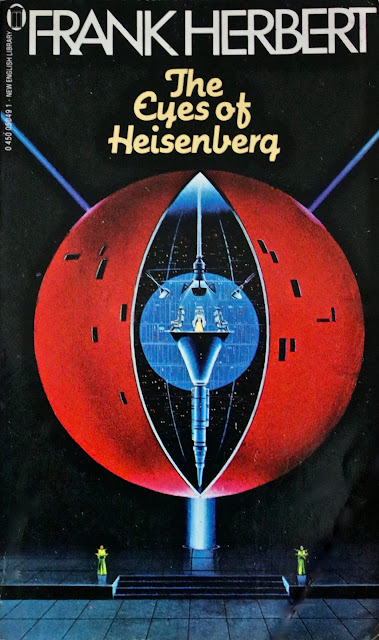