I have not read as much Gene Wolfe as I should have but I did read The Book of the New Sun. Rather that providing my comments, I thought I would let you read Michael Dirda and Gene Wolfe's discussion of the series here.

And a nice post with links can be found at, Battered, Tattered, Yellowed & Creased, Adventures in Fiction

I found this link to fascinating article on Wolfe in the New Republic there;

The Timescale edition above has my favourite Wolfe cover, it is by Don Maitz.
Posted by Guy at 4:11 AM No comments: 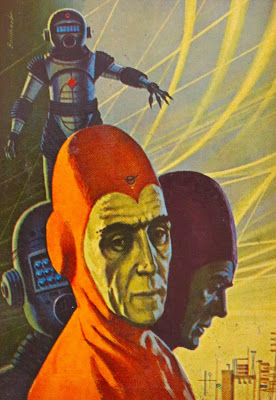 My buddy Doug sent me a clip of this advance in robot locomotion. 10 years of progress in Boston Dynamics robotics GIF.

I have to admit I found it somewhat frightening. My comment to Doug was, "Pretty cool I would feel even better if I did not think it was probably designed to kill me in my bed. Too much SF, maybe." Doug suggested that I would hear it coming. All the more reason to allow all three dogs to sleep in the bed, (like they would move anyway). But hearing it coming and doing anything about it will, I suspect be two very different things. 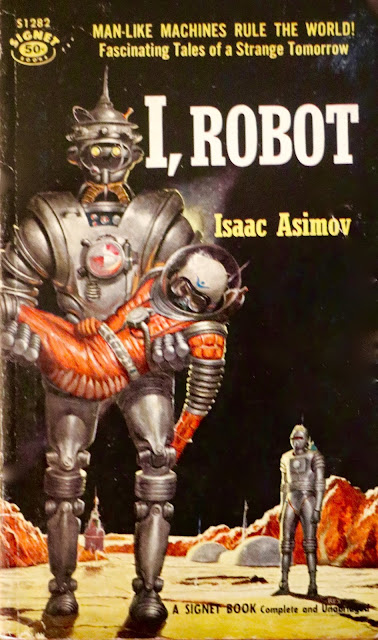 Asimov's robots were my first memorable introduction. But they were constrained, we hoped, by the 3 laws. Then there were lots of robots, good bad and indifferent, but for me the next really memorable robots were Simak's. 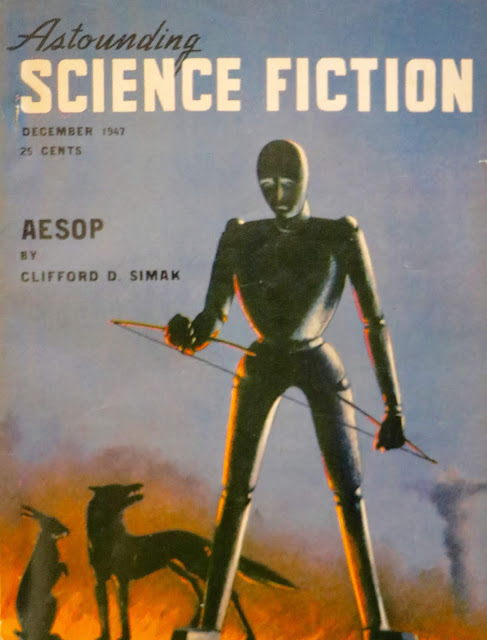 They were everywhere, often as domestic help. Jenkins in City looks after the dogs, Richard Daniel in All the Traps of Earth is a servitor who has outlived his owners, Elmer in Cemetery World is a free robot who earned his living as a construction robot. Then you have the superseded robots who have adopted earthly religions that men have mostly abandoned, Simak must have liked this idea, they appear in in a number of this novels including Project Pope and A Choice of Gods. 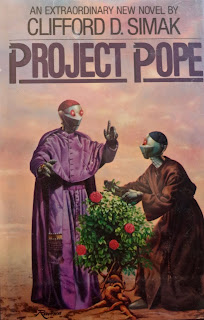 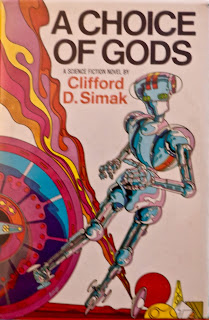 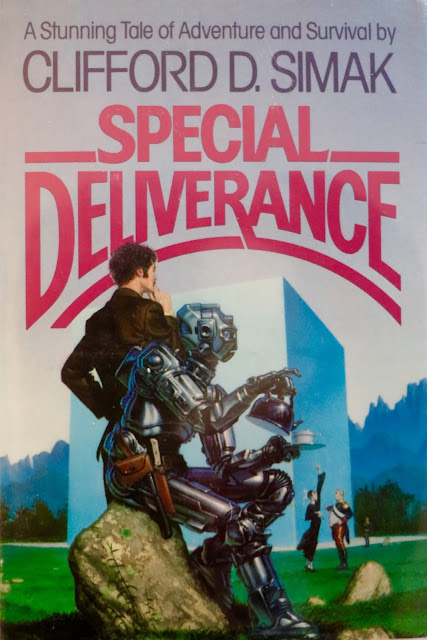 But mostly they seemed to have entered domestic service. As this cover for Special Deliverance featuring a tea making Jurgens can attest.

Jack Williamson in the story "With Folded Hands" indicated the even well meaning robots could go bad, but let us not go there for now.

Jurgens' shape above, was the robot shape I expected, bipedal, head, two arms, two legs, pretty much us in armour with a couple flashing lights. 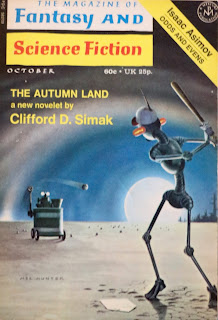 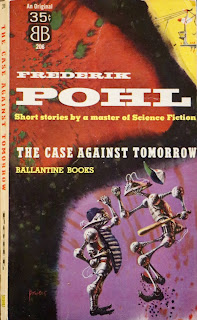 The first ones we got, in my home town of Windsor were not metal us, but basically arms with tools grafted on. They could not move freely or communicate, they didn't even have heads or legs. They could only perform simple repetitive tasks and violate, a cynic might say, all three laws.

This idea of robots and machine culture in general has progressed of course with golems, drones and AI's getting citizenship in Bank's Culture or Asher's Polarity series. And Well's Murderbot does seem to blur the line a bit, human? machine?, though we all love her and wish her well. 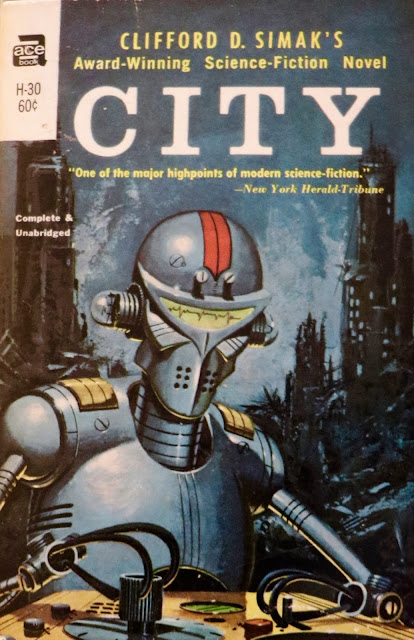 Inhuman robots are still scary. They can really push our buttons.

Which is why I absolutely loved this CLARKSWORLD cover "We are the Robots" by Waldemar Kazak. 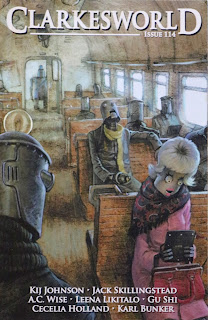 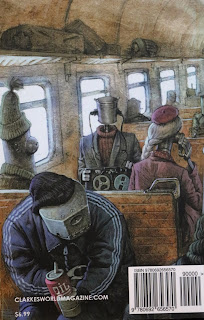 Any robots in your life?

A Choice of Gods, (1972) cover by Michael Hinge, you can tell it was the 70's I had shirts with these colours like this, sigh.

The Magazine of Fantasy and Science fiction, one of Mel Hunter's Lonely Robot covers, but in this one he has a friend.

The Case Against Tomorrow, cover by Richard Powers

City, (1958) cover by Ed Valigursky, possibly the king of robot illustrators for this period.
Posted by Guy at 1:24 PM No comments: 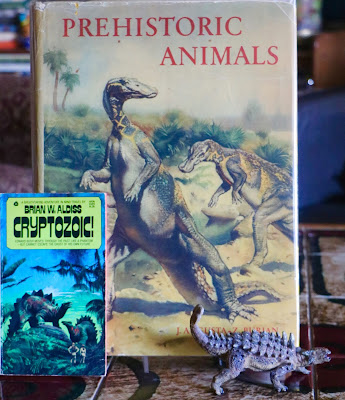 Since dinosaurs have been a major interest in my life, and a subject of abiding interest in science fiction books and films since the genre began, I though I would share this link to a fascinating New Yorker article about what could, potentially, be a fairly significant discovery.

As article author, Douglas Preston (Dinosaurs in the Attic - An Excursion into the American Museum of Natural History) states:

A young paleontologist may have discovered a record of the most significant event in the history of life on Earth. 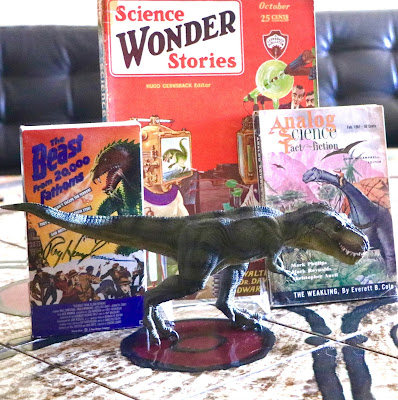 What the paleontologist Robert DePalma might have discovered are fossils laid down just after the asteroid impact that is believed to have caused the extinction of the dinosaurs. I have included a couple of quotes from the article. The first is part of the best description of the kind of damage the impact could have caused, that I can remember reading. As a science fiction fan the fact that the impact could have dispersed material, possibly even living microbes, so far out into space is quite exciting. It could be the dispersal that could launch a thousand plots one might suggest. The discussion of the finds themselves are incredible, hopefully this site will merit a documentary at the very least. So since I love dinosaurs and books, and books about the dinosaurs, plus dinosaurs in films and dinosaur models and since my most memorable birthday cake was one my mother covered with plastic dinosaurs, I wanted to share this link. And some photos of dinosaur goodies of course. Maybe this discovery is too good to be true, but I hope not, and so does that little boy looking at that cake, all those years ago. 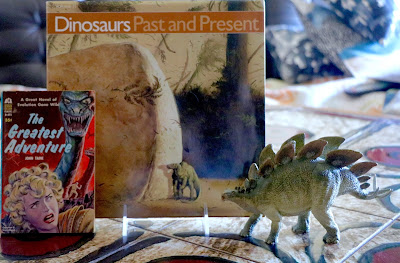 "Some of the ejecta escaped Earth’s gravitational pull and went into irregular orbits around the sun. Over millions of years, bits of it found their way to other planets and moons in the solar system. Mars was eventually strewn with the debris—just as pieces of Mars, knocked aloft by ancient asteroid impacts, have been found on Earth. A 2013 study in the journal Astrobiology estimated that tens of thousands of pounds of impact rubble may have landed on Titan, a moon of Saturn, and on Europa and Callisto, which orbit Jupiter—three satellites that scientists believe may have promising habitats for life. Mathematical models indicate that at least some of this vagabond debris still harbored living microbes. The asteroid may have sown life throughout the solar system, even as it ravaged life on Earth."

“We have the whole KT event preserved in these sediments,” DePalma said. “With this deposit, we can chart what happened the day the Cretaceous died.” No paleontological site remotely like it had ever been found, and, if DePalma’s hypothesis proves correct, the scientific value of the site will be immense. When Walter Alvarez visited the dig last summer, he was astounded. “It is truly a magnificent site,” he wrote to me, adding that it’s “surely one of the best sites ever found for telling just what happened on the day of the impact.”

But eventually life emerged and blossomed again, in new forms. The KT event continues to attract the interest of scientists in no small part because the ashen print it left on the planet is an existential reminder. “We wouldn’t be here talking on the phone if that meteorite hadn’t fallen,” Smit told me, with a laugh. DePalma agreed. For the first hundred million years of their existence, before the asteroid struck, mammals scurried about the feet of the dinosaurs, amounting to little. “But when the dinosaurs were gone it freed them,” DePalma said. In the next epoch, mammals underwent an explosion of adaptive radiation, evolving into a dazzling variety of forms, from tiny bats to gigantic titanotheres, from horses to whales, from fearsome creodonts to large-brained primates with hands that could grasp and minds that could see through time.

All quotes from the New Yorker, hopefully they will not mind.

Dinosaurs Past and Present; Cool Weather by William Stout