Stories of Hope and Wonder: In Support of the UK's Healthcare Workers


Readers of my Lovecraft Blog will recognize that part of this post, (concerning my purchase of the anthology "Stories of Hope and Wonder) appeared there as well. For Jagged Orbit, I will discuss another story from this anthology "The Road to the Sea" by Lavie Tidhar. 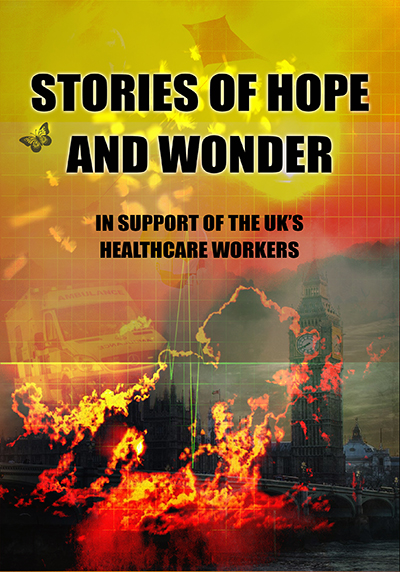 "We all of us like—even THRIVE on—a little hope and wonder in our daily grind. Heck, it’s the marmalade on our morning slice of toast, the bracing and blustery wind off the North Sea and the sunlight in our most darkened days (and we’ve had some of those these past few weeks) so I want to sign off this week’s Newsletter with a nod of appreciation in the direction of our chum Ian Whates, head honcho of Newcon Press on a remarkable project.

STORIES OF HOPE AND WONDER contains a rich and varied treasury of quality stories, from dark to light, humorous to menacing, clever to exciting. Fifty-three stories in all, more than a quarter-million words of fiction, including several pieces that are original to the book, featuring some of the finest writers of science fiction, literary fiction, fantasy, horror, and more.

All proceeds from the sale of this digital anthology are being donated to support NHS staff and other UK healthcare workers. So come on, folks, buy your copy by going here—do it now."

My wife and I have watched a number of programs on the work of the NHS, a recent favourite is "The Secret Life Of The Hospital Bed, is a unique 15-part series where, across the 45-minute episodes, fixed-rig cameras tell the story of patients who enter four different hospitals across the country."

The NHS is a great cause, and I was more than happy to purchase this item. I have several anthologies edited by Ian Whates, including 2001: An Odyssey in Words, so I also knew the collection would be a good one.

"The Road to the Sea" by Lavie Tidhar

I have read several stories by Lavie Tidhar, and I have been quite impressed by them. His world-building is lovely, the stories are imaginative, and the setting and characters beautifully realized. The stories themselves are studies of the relationships between characters and their families, and the societies they live in. They are not overly dramatic or violent. They often act as quiet meditations informing us about Tildhar's imagined worlds and the beings who inhabit them.

I would describe the structure of this story as a fable. Events seem to have taken on the nature of a myth or origin story. The community or area that the characters inhabit is not described in any detail. The inner workings are vague. Instead, we are told, "When the world changed and the moon was hurt and our people came to the Land, the ocean remained." This is the story of little Mai's first journey with the band of salvagers her mother leads. They are going to spend the winter in one of the ancient cities by the ocean, searching for workable metal. They travel to the city via a network of old roads. They walk on the shoulders, Tidhar has Mai make a charming little play on words about walking on the shoulders of giants here. They come across rusting travel pods and avoid traps frequently broken ground, but there are references to wild machines.

Characters have evocative names; there is Old Mercurial, who tells ghost stories, Old Grandma Toffle, Shosho Mosh, the hunter and Old Peculiar, who lost an eye when he disappeared into the blighted lands only to return long after he was presumed dead with a treasure trove of maps. It is clear that in the future little Mai will become a storyteller. This is the story of a post apocalyptic world with some hints about how it came to be, but mostly is the story of little Mai and how she came into her role. I will not say any more; instead, I will leave you with a quote, "but I remember that first glimpse of the ocean, how it went on and on until it reached the sky; it seemed to me an immense beast then, always moving, never quite still, its smooth back stretching across the world; and I thought, for just a moment, that it sensed me, somehow, and that it responded.
Posted by Guy at 12:22 PM 1 comment:

My wife recently subscribed to the Disney Channel (this is not an ad). We had planned to do this in the fall, mainly to see The Mandalorian. Since we are staying home, we decided to get it now. We have enjoyed Bedknobs and Broomsticks, Mickey Thru the Mirror, Frozen one and two, we liked two best. Both Wreck-It Ralphs, we liked one best. We watched James Mason in Journey to the Center of the Earth. and 20,000 Leagues Under the Sea. It was interesting that Mason's crazed killer Nemo is more sympathetic than his incredibly pompous and entitled professor. Friday, we watched The Mandalorian episode two, Cosmos episode two, the domestication of dogs and one of my favourite movies, Wall.E. When the scene comes on where Wall.E is fussily rearranging his many tchotchkes I turned to my wife and said that is me. This lineup made me think of robots, a subject I had been discussing with Doug during a Skype call earlier this week. Our discussion focused on the science fiction trope of humanoid robots and how, when commercial robots appeared, they were programable arms for welding and painting in factories, not Asimov's R. Daneel Olivaw or Simak's Richard Daniel. The Mandalorian reminded me that it was in the Star Wars universe that I became accustomed to robots in all sizes and shapes, even if some seem impractical or unnecessary. So I went to the shelves and looked for robots. I avoided scary robots, choosing instead depictions of robots who seem not only humanoid in shape but in character. Just like my hero Wall.E. 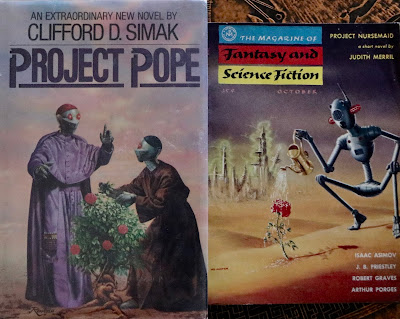 Robots like roses just like me,
actually the gardener in Project Pope is not at all nice. 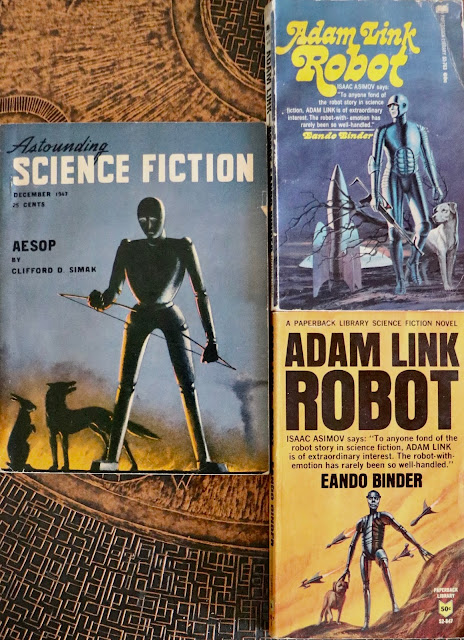 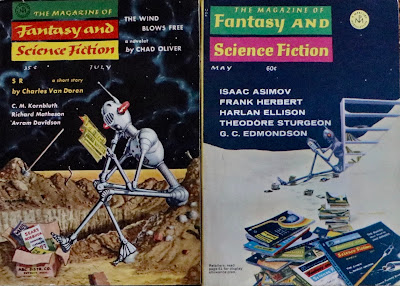 and their taste in literature seem similar to mine. 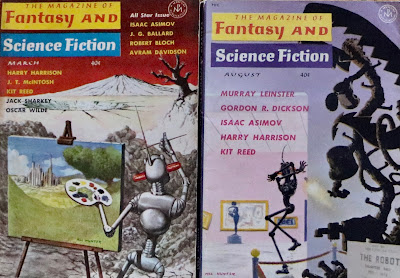 In art they might prefer the Bob Ross school, but that is fine. 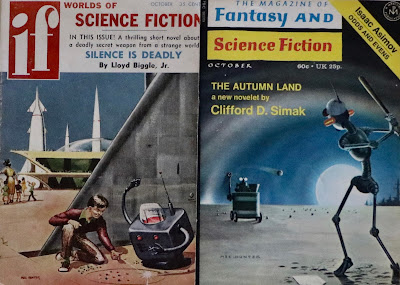 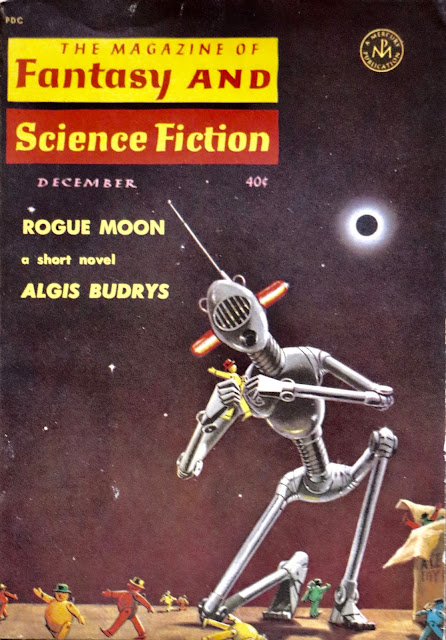 Sometimes they get their own back, 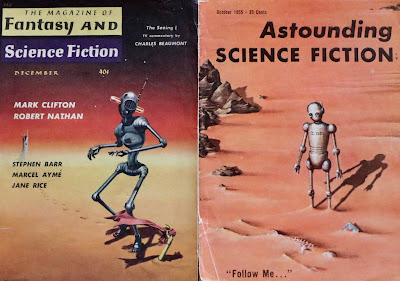 and on occasion they must confront reminders of their own mortality.
Stay well, stay safe.

Most are by the incomparable Mel Hunter for more on Mel see The Lonely Robot post at Ralph E. Vaughan's wonderful blog Book Scribbles.

A Medicine for Melancoly (Or: The Sovereign Remedy Revealed!) by Ray Bradbury 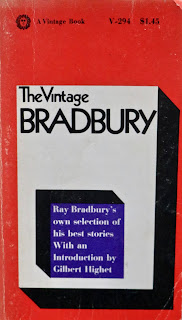 I began reading this story some time ago. Certainly, before our period of self-isolation started. This morning after completing Asimov's "The Winds of  Change", I decided to finish it, possibly because I associate both writers with the first science fiction stories I read.

Mr. and Mrs. Wilkes have had several doctors attending to their daughter Camilla. None has helped, and finally when the last suggests bleeding her, they drive him off. She tells them she hurts, the list is long, but basically all over. "Since the start of spring, three weeks, I've been a ghost in my mirror; I frighten me. To think  I'll die without seeing my twentieth birthday."  (39)

Her parents are at a loss; their son Jamie suggests they take her downstairs and set her outside the door. He reasons that someone going by might recognize her condition and suggest a cure.

"Father?' said Jamie breathlessly. " Have you ever known one single man who didn't think he personally wrote Materia Medica? This green ointment for sour throat, that ox-salve for miasma or bloat? Right now, ten thousand self-appointed apothecaries sneak off down there, their wisdom lost to us!" (40)

When the crowd becomes unruly, Jamie suggests charging them a tuppence for providing a diagnosis. While Camilla's condition remains undiagnosed, the family raises a lot of money to the amazement of Mr. Wilkes.

"Did you imagine, family, so many people, two hundred, would pay to give us their opinion?"

"Yes" said Mrs. Wilkes. "Wives, husbands, children are deaf to each other. So people gladly pay to have someone listen. poor things, each today thought he and he alone knew dropsy, glanders, could tell the slaver from hives. So tonight we are rich and two hundred people are happy, having unloaded their full medical kit at our door." (43) The Vintage Bradbury. 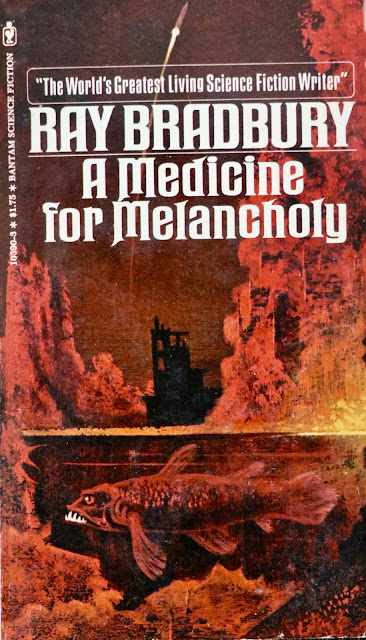 As is often the case, Bradbury's characters operate with a feverish, almost manic intensity. He has always been a romantic, unfettered by science and the somewhat unconventional solution to their problem is also typical of his work. I enjoyed the story, Bradbury offers some cynical but none the less accurate observations about human nature and our love for offering advice which seem particularly appropriate in our current era of internet charlatans, celebrity "influencers", and pontificating politicians. Also, the mention of ox-salve reminded me of my mother applying horse liniment to my dodgy ankle. The diagrams on the label showing how my fetlocks would be improved by several applications were particularly illuminating.