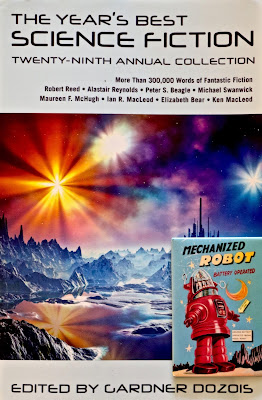 I have over the years read lots of SF, which explains the large number of books and SF themed troikas around here. it also explains why I have decided to devote a part of my retirement to reading and writing about SF. But it spares me from handing out leaflets outside the community centre or being a greeter for the evil empire so it’s all good.

I read this in The Year's Best Science Fiction Twenty-Ninth Annual Collection ed. by Gardner Dozois, cover illustration by Shutterstock.

This predilection for SF means that often when I read SF it becomes associational for me. And these associations often add an extra layer of enjoyment. This is the case with Elizabeth Bear’s short story "Dolly". It is Sunday in Birmingham, Alabama and a billionaire Clive Steele has been found eviscerated in his living room, the only other occupant of the locked home is a blood covered “Dolly“ a robotic sex toy next to the body. It is up to detectives Rosamund Kirkbride (Roz) and Peter King to figure out what happened. I enjoyed the story, the first obvious association and one I was happy Bear makes herself is to Asimov and his positronic brains. “Whatever a positronic brain is, we don’t have it. Asimov’s fictional robots were self aware. Dolly’s neurons are binary, as we used to think human neurons were. She dosen’t have the nuanced neurochemistry of even. say, a cat”. (66)

Another association that came across right away was of ARM investigator Gil Hamilton in Larry Niven’s short story “ARM” viewing the body of Dr Raymond Sinclair in another locked room mystery. But I am also drawn to Ghost in A Shell Two, the animated films of the 1990’s not the one currently featured in trailers, with Scarlett Johansson playing the Major. (Not only would an Asian actress be preferable in my mind , but Johansson is already grossly over exposed through her appearances in the MARVEL franchise.)

Lastly I remembered the character of Richard Daniels from Simak’s All the Traps of Earth the first work I reviewed on this bog. Which is not to say that Bear’s story is a mashup, the genre’s of SF and Mystery fiction have long spawned hybrids, Caves of Steel, The Naked Sun, Blade Runner to name a few, it is fertile ground. Bear manages to add some nice twists, we don’t have to endure the worn trope of an over bearing supervisor pushing for a quick solution. We do have a brief appearance by an odorous corporate shill bent on minimizing negative publicity, in this case Doug Jervis a VP of Corporate Relations for Venus Consolidated, but maybe this is a constant like gravity rather then a trope per se.


The story is nicely balanced in only six or so pages, Bear intertwines sufficient dialog and description to show rather than tell, integrating the near future environment with the rest of the story seamlessly. The detectives are nicely drawn with distinct personalities and Bear allows the reader to pick up on the nuances of the action without belabouring anything. Also she stops at the correct point in my mind allowing the reverberations of this murder to ripple out across the readers mind rather than the page.
Posted by Guy at 12:38 PM No comments: 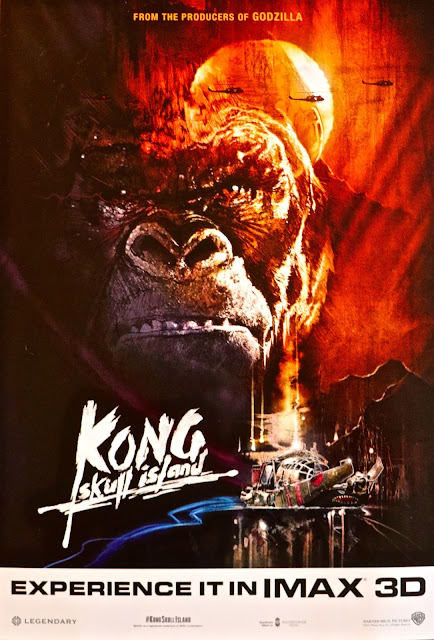 Yesterday my wife and I went to the movies to see Kong Skull Island. Upon leaving we received copies of this poster. Yippee!! Free stuff after paying a lot and having to sit through commercials, commercials grrr before the movie it was nice to get something extra. I will not bother with a review there are lots out there. I suspect you already know whether you will like it or not.

I have 20 plus Godzilla CD's sitting 2ft from where I am typing this, a Gamera boxed set, a plastic Godzilla, books including William Tsetse's brilliant Godzilla On My Mind: Fifty Years of the King of Monsters, I just received four Godzilla themed t-shirts by mail, one of the earliest SF films I watched (and still a favourite) was Them and my favourite fan experience was getting stuff signed by Ray Harryhausen when he appeared at a film festival in his honour at the Royal Tyrell Museum of Palaeontology. So yes we enjoyed it.

We will be framing one. 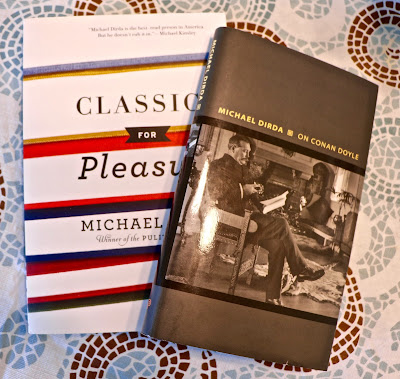 Some time ago I encountered the essays of Michael Dirda a Pulitzer Prize-winning columnist for The Washington Post Book World. As someone who is surrounded by more books than I can read in my remaining years, and who purchases even more each month, I was delighted to read the essays of someone who admits he shares much the same hobby/failing/obsession/etc. A critic who still haunts library book sales and used book stores and discusses not just Spinoza, Dickens and Welty but also Dick, Lovecraft, Vance and Doyle. Who in his book Browsing: A Year of Reading, Collecting, and Living with Books notes that he acquired a number of issues of The Magazine of Fantasy and Science Fiction form the 1960's at a library book sale and then discusses the contents noting for example that Carol Emshwiller is one of the greatest living writers of fantasy and science fiction.

So when I noticed that he had just reviewed two anthologies

Stableford's Scientific Romance: An International Anthology of Pioneering Science Fiction, January 2017 and Sisters of Tomorrow: The First Women of Science Fiction, by Lisa Yaszek and Patrick B. Sharp

I thought I would pass along the link.

Some new arrivals via ABE.

A rubbed and tattered but reasonably priced copy of
Seekers of Tomorrow, World Publishing Company
1961 (1966) cover (?)

I had always associated Moskowitz with early fandom and thought his book would be fannish boosetrism. I purchased it because my research indicated that he provided information on the writers first exposure to SF which I was interested in. However after reading his entry on Bradbury I found it fairly balanced so that was a bonus.

I also found that Moskowitz's definition of SF which first appeared in his history of early SF Explorers of the Infinite, quite useful and it is one I will probably use from now on, unless a better one presents itself.

"Science fiction is a branch of fantasy identifiable by the fact that it eases the "willing suspension of disbelief" on the part of the readers by utilizing an atmosphere of scientific credibility for its imaginative speculations in physical science, space time, social science. and philosophy." 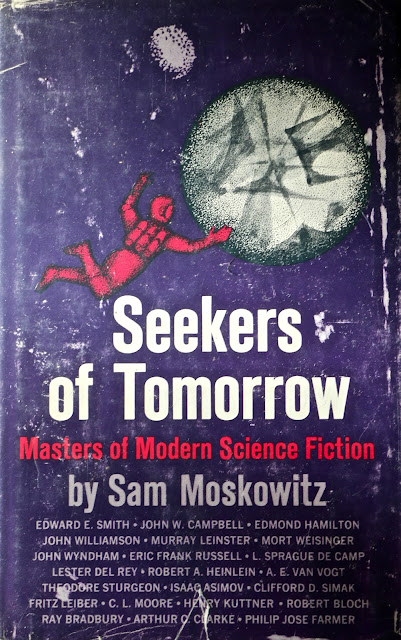 My addition to anthologies continues. After the death of SF author Cyril Kornbluth (March 1958) this anthology was created as a memorial. Fredrick Pohl's discussion of it's genesis is available on The Way The Future Blogs.

An anthology has been assembled as a memorial to the late C.M. Kornbluth, by his friends and highly capable colleagues in the medium. Most of them are also familiar to this audience- Avram Davidson, Ray Bradbury, James Blish, Murray Leinster and Jack Williamson. Many of the stories are themed by travel to and survival in other worlds; there's the past too- Poul Anderson's The Long Remembering sends a man back to the Old Stone Age; for a touch of the grotesque, Frederik Pohl's cure of a compulsive consumer- The Man Who Ate the World; and a very nice twist to Theodore Sturgeon's That Low, as a failure specialist attempts to end his life.... Varied and versatile. 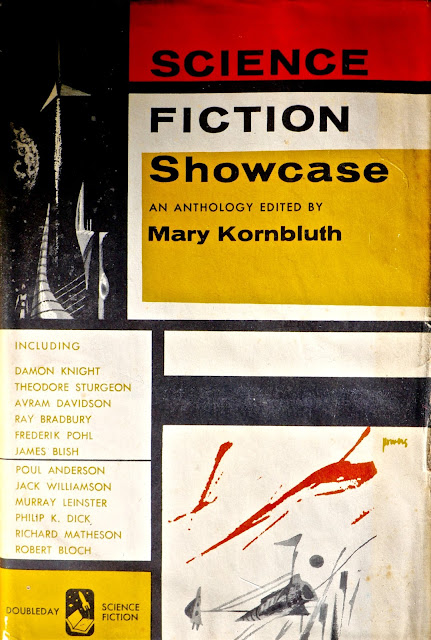 From the introduction to Godlike Machines, by Jonathan Strahan, "There is something intensely science fictional about the very notion of a big dumb object, embodying as it does both the enigmatic sense of wonder of the best SF and the urge to understand, to examine and clarify."

I am always willing to go looking for that oft lost sense of wonder, and after reading Seam William's  short story "Inevitable" in The New Space Opera 2,  I was interested in his story "A glimpse of the marvellous structure (and the threat it entails) in this anthology, although the first story I read was "Hot rock" by Greg Egan (good). 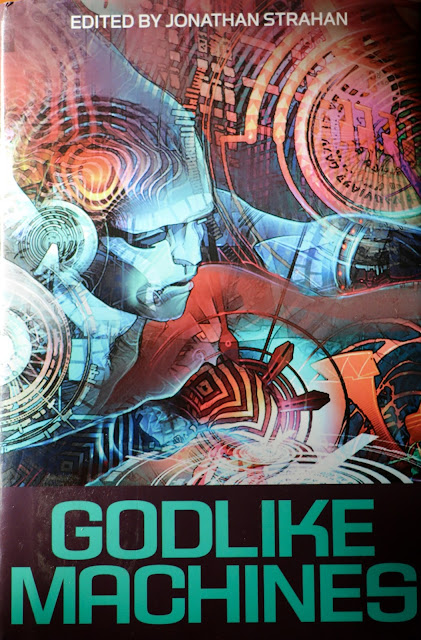