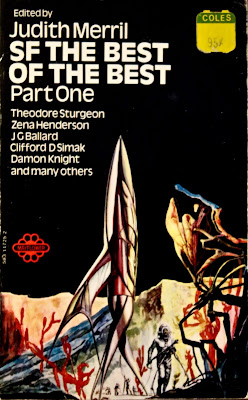 A few days ago Rich Horton, who maintains the website, Strange at Ecbatan posted on the death of science fiction writer Carol Emshwiller.

"The remarkable Carol Emshwiller died, age 97, on February 2. She was one of the most individual voices in SF over a career of nearly six decades, beginning in the mid 1950s. She also wrote contemporary novels set in the American West."
http://rrhorton.blogspot.com/2019/02/in-memoriam-carol-emshwiller-look-at.html

Her entry at The Encyclopedia of Science Fiction is here

One advantage to collecting more anthologies than I can ever read is that I can use the ISFDB to find certain stories by certain authors and see if I have a copy. I did have a number of stories by Emshwiller so I will be reading them over the next few weeks.

For many years I would have suggested that the Science Fiction Hall of Fame vols. provided a good introduction to science fiction. I still think some of the stories are among the best of their period but others are hopelessly dated. Now I would recommend The Big Book of Science Fiction by Ann and Jeff Vandermeer. I will discuss this volume in more detail in another post, but one thing I enjoy is the detailed biographical entry that proceeds the author's story. Their anthology The Weird: A Compendium of Strange and Dark Stories is also great but that is another post on another website,

"Ursula K. Le Guin has called Emshwiller “a major fabulist, a marvelous magical realist, one of the strongest, most complex, most consistently feminist voices in fiction.” Karen Joy Fowler said of Emshwiller, “She still defies imitation. But it is my contention that sometime in the last fifteen to twenty years, she has become stealthily influential.”

and "Emshwiller has given her own assessment of her work: “A lot of people don’t seem to understand how planned and plotted even the most experimental of my stories are. I’m not interested in stories where anything can happen at any time. I set up clues to foreshadow what will happen and what is foreshadowed does happen. I try to have all, or most of the elements in the stories, linked to each other."

The Emshwiller story they include in this volume is "Pelt" which first appeared in The Magazine of Fantasy and Science Fiction for November 1958.

The point of view character for "Pelt" is a big white dog. The dog is the companion of a hunter. While several names are used throughout the story it is unclear if they are the dog's actual name. The dog and her master have been on the planet Jaxa for two days. It is winter and the dog loves the planet, there are lots of smells and the ice and snow make for a wonderful landscape of sounds that Emshwiller describes in detail for us. The dog wears a throat mike and has been trained in a series of signals that alert her master to prey or danger, etc. The dog ranges ahead looking for game the hunter can kill. The hunter is collecting furs to sell to "rich earth ladies" he also collected the heads of the animals. On this day the dog encounters a new smell which it describes as honey-furry-fatman, the dog is unclear whether this represents prey or danger. Then it meets one of the creatures, a large alien with beautiful striped fur and huge orange eye in the centre of it's forehead above it's two smaller eyes, which are kind. The alien uses telepathy to ask the dog a question that will be asked several times in the story. "We have watched you, little slave. What have you done that is free today?" (368)

Normally I would stop here but the story impressed me so much I want to look at it in some detail. Be warned this will involve spoilers.

First looking at the use of the dog as the point of view character. (London's Call of the Wild does spring to mind) This choice of the dog does limit Emshwiller's options, the hunter does not say anything substantive to the dog, and while we are told at one point that he talks to himself, he does not say anything meaningful that the dog picks up. So we are reliant on the hunter's smell and actions to convey his feelings. Also the aliens communicate with the dog but only to urge it to be free. They either cannot or will not communicate with the hunter, except through their actions. While these are limitations they also make us work to understand the subsequent actions of both the hunter and the aliens. Emshwiller does not tell us what is going on in the minds of the characters, we have to work it out.

The dog will not track the sentient aliens, but when an alien, apparently distracted, steps into view, the hunter kills it. Once he approaches it he realizes it is sentient, it was carrying a bag of food. Despite this he skins it and takes the pelt, however the dog notes he leaves other trophies, the head and the hands. He then begins to return quickly and directly to the ship. On the way another alien steps directly into his path but he makes no attempt to shoot it. When he arrives at the ship a group of aliens are waiting. He tries to return the pelt but instead they force a package containing the head and hands on him as well.

So my interpretation, the hunter is upset to find he has killed a sentient being, but this does not seem to be a moral issue. He does take the pelt after all.  Does he leave the head and hands because if he attempted to sell them they could indicate to any buyers or regulatory agencies that he has killed a sentient being? I suspect he has broken a law and wants to leave the planet immediately before there is more trouble.

The actions of the aliens are harder to fathom, but this is as it should be. Too often the aliens in science fiction are just humans with pointy ears or blue skin. Emshwiller walks a narrow line, we can understand or think, we understand some of what the aliens are trying to do, but not all of it.They show themselves to the hunter even after he has already killed one of them, don't they fear death or can they sense he will not kill again?

"We have watched you, little slave. What have you done that is free today?" (368)

But with freedom comes the responsibility for one's choices, one cannot slough off the responsibility. By forcing the head and hands on the hunter, they force him to carry the symbols of his guilt with him. They seem genuinely interested in freeing the dog from it's slavery. But the tragedy is that through conditioning or indecision the dog cannot choose, and so is denied the freedom of the planet Jaxa, which it desires. They will not choose for it.

Too often the science fiction of the 1950's features some explanation of what just happened tacked on to the end to clean up the ambiguous bits. Emshwiller makes us work while we read, so we have to try to understand the characters and the alien environments she presents, the choices she made in plotting the story. In the quote above she mentions "foreshadowing" I think she uses this technique to draw from the reader what she wants or expects. She wants the reader's attention. She wants them to immerse themselves in the text and think about where the story is going and what she is trying to say. My conclusions are based on a single story, I will be reading more of her stories, so my interpretation may change. I do know this was a well written story and one that kept me thinking.

This story also appeared in Judith Merril's SF The Best of the Best, 1970, with a lovely cover by Josh Kirby.