"The Whispering Well" by Clifford Simak

Our neighbourhood has many little libraries where one can exchange books.  I do partake, although I am better at taking than replacing. I have a large number of books earmarked for them; I simply don't get around to it. (Pause while I fill the backpack for the next walk with the dogs.)  The latest acquisition was a horror anthology, no surprise there, called Dark Forces edited by Kirby McCauley. I approached it as I usually do by reading the introduction. Then I looked for favourite authors. 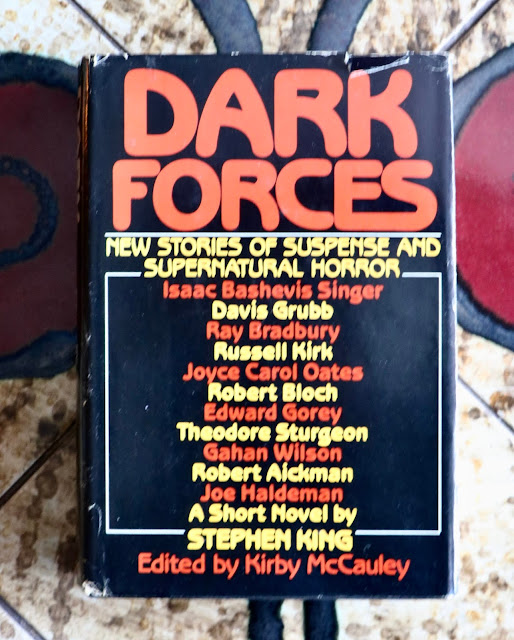 Bingo a Silver John story by Manly Wade Wellman "Owls Hoot in the Daytime." I had never read this one, and it was not bad. It reminded me of a comment I once heard about Robert Howard's heroes. I can't remember if it came from Howard himself or not. You know that Solomon Kane, Conan or Kull etc., will be captured or surrounded at some point in the story. To avoid a lot of mental gymnastics Howard keeps the mechanism by which they escape simple.  They burst their bonds, hack their way through or are released by a heroine. Silver John has a slightly more extensive tool kit but not by much. There is silver, usually the strings on his guitar, a passage from John  George Holman's book Pow-Wows; or, Long Lost Friend or brute strength combined with pluck and luck.

I enjoyed this, but it did not cover new ground. The third story I read was longer "The Mist" by Stephen King. It might be the first King I have read. I don't read a lot of modern horror, preferring Edwardian or Victorian stories or mythos fiction. "The Mist" is about a group of people trapped in a grocery store by monsters that come through an inter-dimensional rift. The narrator is trapped in the store with his young son. The assumption is his wife, who stayed home, has been claimed by the mist. So you have family stuff and group dynamics. This is pretty everything I dislike in a horror story (yeah there is sex as well so we are covered). In my universe the narrator should be alone or possibly with a few companions. They should be an intrepid polar explorer, occult investigator, unwary academic, luckless tenant, or the doomed beneficiary of a distant relative's largess. If the codicil says burn the book, house, mummy, etc., it is probably a good idea. I may or may not look at King again. So many books, so little time.

The story I want to discuss is "The Whispering Well" by Clifford Simak. Thomas Parker is a professional non-fiction author. His recent books include works on palaeontology, Egyptology, ancient trade routes and folklore. As the story begins, he has been summoned by an eccentric but well-off aunt to write a family history. He agrees, and the story then jumps to his last stop. He is visiting the site of the farmstead of Ned Parker who settled there after the Civil War. This location became Parker's Ridge. It was not the best land available, but there was timber and a stream for hunting and fishing. Ned was worried, however, that the stream might dry up and had a well dug. The water table was so low that a huge windmill was installed to raise the water, and the whistling well was born. The locals say the ridge and the well has a "bad reputation" but can supply no specifics. However, Thomas feels a certain attraction to it and drives up to spend a few days in his camper. He immediately finds gastroliths, the gizzard stones of a dinosaur. All the time spent in museums has come in handy. There is a problem, however, because there is an undecipherable symbol engraved on it. After examining it closely, Parker comes to believe the engraving dates to the same period as the dinosaur which swallowed it.  There are also huge shapes that move around in the dark beyond his campfire, and he begins to feel uneasy. He remembers a discussion he had with an old black preacher while researching his book on folklore. The unnamed preacher talks about an ancient evil, one that predates our belief in the devil. An evil that predates humanity itself. ( Here, the story is marred by the typical racism of the genre/period) " You white folks don't know. You don't feel it in your bones. You're too far from the jungle. My people, we know. Or some of us do. We're only a few lifetimes out of Africa." (221)

I will insert a plug of Lost Kingdoms of Africa, details here,

While this passage is jarring today, I loved the concept that Simak introduced. "You're saying that there was evil before man. That figures of evil are not man's imagining?" (221) Here I think, Simak is not talking about the evil men do, but the archetypes that inform our concept of evil or rather the supernatural. His work often contains trolls, ghosts, banshees, and the devil himself. See The Goblin Reservation or, better yet, Out of Their Minds. 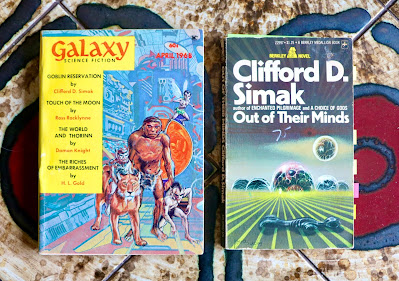 This story is typical Simak with rocking chairs, a lone protaganist and a farm on a timbered ridge overlooking the river. But even more, large parts of it seem drawn from Simak's own life.

"He walked the ridge, so high against the sky, so windswept, so clean, so open, so far-seeing. As if the land itself, the soil, the stone, were reaching up, standing on tiptoe, to lift itself, stretching toward the sky. So high that one, looking down, could see the backs of the hawks that swung in steady hunting circles above the river valley." (209) "The Whispering Well"

"This stems, I would suspect, from my boyhood, which was spent in the rural areas of southwestern Wisconsin. The impression made upon me by that country has stayed with me throughout my life. It is a picturesque country, with great high hills, deep wooded ravines, a couple of good sized rivers, the Wisconsin and the Mississippi, and any number of smaller streams running down almost every hollow or valley. As a boy and young man I hunted the hills and fished the valleys and was never  happier than when tramping through the woods. There was a peace and an understanding there I have found nowhere else." (64) Clifford Simak interviewed by Paul Walker in Speaking of Science Fiction.

Parker and Simak have both produced non-fiction books on similar topics. I have three of Simak non-fiction titles here, he also published Prehistoric Man (1971), which is both outdated and expensive on ABE. Since I have several shelves on hominid evolution, I have given it a pass. 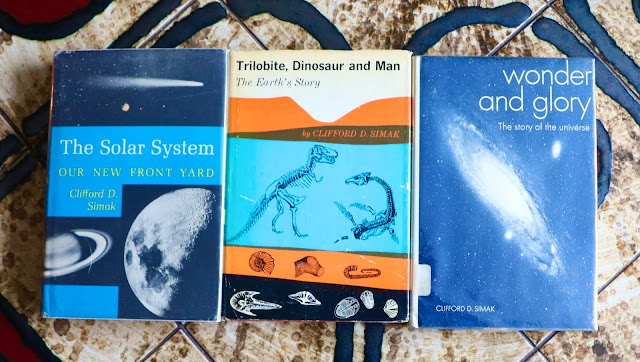 I had posted this here because I see Simak as primarily a science fiction writer; that said, the Horror Writers Association made him one of three inaugural winners of the Bram Stoker Award for Lifetime Achievement. I enjoyed this story. It has all the right elements for me, a lone bemused protagonist, existential angst, revelations out of deep time, dinosaurs and a certain amount of H.P.L. cosmicism. In my earlier post on Ray Bradbury's The Halloween Tree, I stated.

"And I realize now it had continued to be my life. Reading Bradbury, I understood that the things that interested me as a child are largely the things that interest me today. I still love rocket ships, dinosaurs, and books with mummies, witches and werewolves on the cover." In Simak work, I again find an author who speaks too many of my lifelong interests. I do wonder, as I have with several other Simak's works whether he could have done more with this concept. But that is probably best discussed in another post.

I will be revisiting "The Whispering Well" again sometime soon.

Dark Forces jacket design by One + One Studio

Out of Their Minds by Richard Powers