M. John Harrsion, The Pastel City and A Storm of Wings 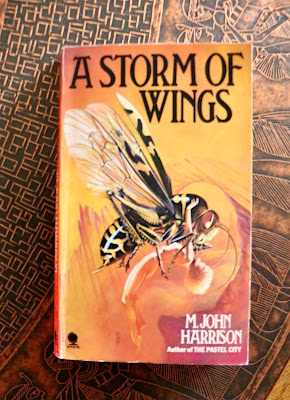 I have still been reading a lot of non-fiction; lately, astrobiology and human evolution being the main topics of interest. However, I did manage some science fiction, choosing my selections from recent reviews by other bloggers I have followed for some time. I will post links after my discussions. As usual, I did not finish the reviews choosing to form my own impressions. I will complete them after I have made my comments. A discussion of M. John Harrison's A Storm of Wings lead me to reread The Pastel City and then move on to A Storm of Wings. Both novels centre around threats to Viriconium, The Pastel City. In The Pastel City, Lord tegeus-Cromis, who has retired to a seaside tower's seclusion, is approached by Birkin Grif, a friend and fellow knight of the order who served the late King Methven Nian. The empire is now ruled by Methven's daughter Methvet. However, her cousin Canna Moidart is the ruler of the Northern Tribes, traditional enemies of Viriconium.

The Encyclopedia of Science Fiction describes the setting of the Viriconium stories as, "It is a Far-Future science fantasy set on a bleak Dying Earth, whose description plays on Sword-and-Sorcery imagery, though nothing happens of a magical nature. " http://www.sf-encyclopedia.com/entry/harrison_m_john

The Viriconium empire follows " Some seventeen notable empires rose in the Middle Period of Earth. These were the Afternoon Cultures. All but one are unimportant to this narrative," (TPC7)

The economy of the Viriconium Empire relies on salvaging machines left behind by the Afternoon Cultures. They cannot manufacture this level of technology themselves, and the society operates on a medieval level.

To discuss the events in A Storm of Winds, spoilers for The Pastel City will follow.

Upon learning of this threat, tegeus-Cromis travels to Viriconium to look for two other knights Norvin Trinor and Tomb the Dwarf. He also meets with the young queen, who tells him that the knights should take command of the army she sent north some days earlier. Birkin Grif and his smugglers have already gone to join the army. tegeus-Cromis finds out that Norvin Trinor left for the north years ago.

On the journey, north tegeus-Cromis encounters a metal Bearded Vulture. The bird tells him he must detour to meet someone called Cellur of Girvan. Cellur has vital information about a threat to the empire called the geteit chemosit, tegeus-Cromis ignores this warning. He rejoins Birkin Grif. One night one of the guards is killed. The top of his head has been sheared off and his brain removed. tegeus-Cromis himself is attacked by a huge dark creature with yellow points for eyes. It is armed with a great bann, an energy weapon of the Afternoon Culture that sound a bit like a light sabre.

Later they are joined by Tomb the dwarf,he is a scavenger and expert on the machines left by the Afternoon Cultures. He has crafted an exoskeleton for himself that he uses in battle. I will now offer a summary of the events in A Storm of Wings and then discuss both works in my remarks.

A Storm of Wings takes place 80 years later. tegeus-Cromis is dead. The empire is still ruled by Queen Methvet. Her commander is Alsath Fulthor, a Reborn Man. There is widespread unrest in Viriconium as a religion called The Sign of the Locust has appeared. It is described as "a theopneustia, existing without recourse to brain and blood: a Muse or demiurge - to express itself. It wears its congregation like a disguise: we did not so much create the Sign of the Locust as invite it into ourselves, now it dons us nightly like a cloak and domino to go abroad in the world." (ASOW19)

The cultists come from all segments of society, including the Queen's guard. The religion has spawned numerous schisms and heresies. They murder people seemingly at random. They hate the Reborn most of all, feeling the Reborn have disenfranchised them within Viriconium society. Most Reborn have left the city for the north, but a young Reborn woman Fay Glass has returned carrying a bundle containing the head of a giant insect. Pursued by a mob, she encountered Gaen Hornwrack. Hornwrack is having a bad day, and it is this rather than any sense of nobility that motivates him to kill several cultists and save the Glass. Hornwrack was a young pilot in training during the War of the Two Queens.  Scavenged airships were in short supply, and he had to watch as the older pilots flew off to battle. After the war, he failed at a number of professions and lost his ancestral lands. He now operates as a very successful assassin in the Lower City, having killed some 80 men. However, Glass's rescue has brought him to the Queen's attention, and he is summoned to a conference at the palace. There he meets Methve, Tomb, Cellur and Alsath Fulthor. Hoenwrack is hostile, blaming the Queen for his problems. She attempts to reward him and draw him into her service by gifting him the armour and nameless sword of tegeus-Cromis. Eventually, Hornwrack is recruited. It is agreed that he and Alsath Fulthor will accompany Fay Glass to her village.

Tomb and Cellur will remain with the Queen. They can follow at least some of the journey using giant screens in the throne room. Before Hornwrack's party can leave, a vision/entity/projection/ appears floating above their heads. It is the grotesque figure of an enormously fat man wearing a strange mask or breathing device. His words are nonsensical, sometimes he appears quite solid, and sometimes he fades away and disappears. Later, Tomb will identify him as Benedict Paucemanly, a legendary airman last seen when he launched his airship Saucy Sal on a trip to the moon. Paucemanly seems to form a connection with Hornwrack and often appears to him on the journey.

Most of the characters in this story display a striking lack of motivation or purpose; this includes Hornwrack, the two Reborn, the people of the Lower City and the inhabitants of the fishing village Iron Chime.

Even the landscape they travel in seems to reflect this dissolution of the past or the loss of established order.

"the World is coming to bits," said Galen Hornwrack, and someone answered dryly. "The world is being exchanged for something else."

"It comes to me that each of us suffered during this northern transit an emptying or bleaching of identity in preparation for the future we could not describe." (ASOW94)

The plot, especially the journey north, devolves into chaotic episodes with only the occasional visitations by Benedict Paucemanly pulling Hornwrack along. The Reborn are little more than encumbrances.

"The Reborn Men do not think as we do. They live in waking dreams, pursued create a by a past they do not understand, harried by a birthright which has no meaning to them: taunted by amnesia of the soul. (ASOW3)

As one might expect for this type of novel, the feeling of senescence is strong in both works but becomes almost overwhelming in A Storm of Wings. I have to admit the last half began to wander a bit for me, but in the end, the revelations around Benedict Paucemanly on the moon enthralled me. 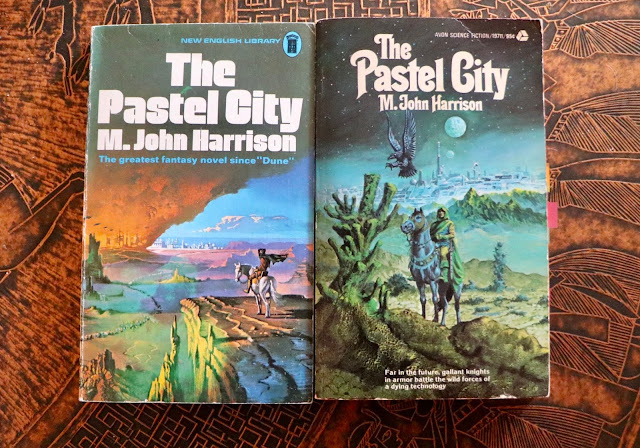 These novels ticked a lot of boxes for me. They conjured up memories of the dying earth novels of Clarke Ashton Smith, Jack Vance. The lack of magic and the fact that Viriconium exists amid the remnants of more technologically advanced societies brings to mind Gene Wolfe's The Book of The New Sun series or Mark S, Geston's brilliant novels Lords of the Starship and Out of the Mouth of Dragons. ( I promised to look at Lords of the Starship here but never did. I will get to it.)

There also seems to be a bit of the nihilism of Moorcock's Granbretan from Hawkmoon novels and the fevered dreams of Melville's Perdido Street Station, more books I loved. And the removal of brains in A Storm of Wings brings to mind my favourite Laumer novel, A Plague of Demons.

Books often speak to me of other books I have known and loved, and that is what keeps me reading and indeed posting.

Some years ago, I read The Pastel City, which encouraged me to read Harrison's novel The Committed Men, which I loved and discussed here. There are many similarities, with a small group of characters moving through a blighted landscape populated by groups struggling to live amid an almost unrecognizable landscape.

What I had forgotten, was what a wonderful writer Harrison is.

"Clinging grimly to a stanchion as the daring young Courier flung his ship about the dangerous sky, he felt as if he were sitting behind the eyes of a tumbler pigeon:...," (TPC94)

"Something in the resigned, defeated landscape ( or was it simply waiting to be born? Who can tell at which end of Time these places have their existence?) called out to his senses.., " (TPS102)

"Somewhere between midnight and dawn, in that hour when sick men topple from the high ledges of themselves and fall into the darkness.., " (ASOW2)

"Here, organic towers, tall shapeless masses of tissue cultured from the plasm of ancient mammals, trumpeted and moaned across the abandoned wastes of another continent." ..,(ASOW5)

We have several other novels by Harrison around the house Helen had Nova Swing and Light and I know there is another Viriconium novel here if I can find it, so I am looking forward to reading more of his work.

And this all started because I noticed Joachim Boaz's post here.

A Storm of Wings, Chris Achilleos