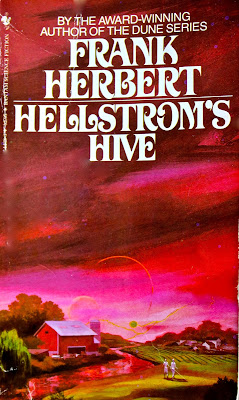 I mentioned in my last post my intention to look back at the works of some of the authors that were important to my teenage years. Frank Herbert was my first choice. I will concentrate on non-Dune work. I loved Dune, the vast implied history provided in the epigrams, the replacement of computers with mentats, the limitations on projectile weapons that gave it an archaic Planet Stories vibe with it’s duels, ornithopters and worms, the ecological message with its water reclamation and stillsuits. I did not really care for the two subsequent books or the franchise that grew out of them. As an archaeology prof once said, he used Dune to build up Paul and the next two to undermine much of book one, and I agreed. I know now there was a reason and I will discuss it as it relates to Hellstrom’s Hive later.

A friend recommended I read Hellstrom;’s Hive, I think as much to get my impressions as based on any fondness for the book. It follows that well worn SF path of insects and insect based societies, this is not a spoiler as the title and the first epigram both give this away

“ Words of the brood mother, Trova Hellstrom. I welcome the day when I will go into the vats and become one with all our people.

The book begins with Carlos Depeaux observing The Farm, the location in Oregon where Nils Hellstrom creates nature documentaries on insects. Carlos and his partner Tymiena Grinelli work for a shadowy government or quasi-government body called the Agency. They have been dispatched to learn the fate of a previous agent Julius Porter who disappeared earlier while observing Hellstrom’s activities. The Agency is not the FBI or CIA  and appears to be motivated as much by commercial advantage as credible security threats. Indeed that initial investigation of Hellstrom’s activities began when an Agency operative copied a file that was left unguarded by a Hellstrom staff member in the MIT library. It described their work on Project 40, “a toroidal field disrupter” a electron (or particle) pump capable of influencing physical matter at a distance. (10) While experts tell the Agency that if it works, under certain conditions, it “could shatter the earth’s crust with disastrous consequences for all life on our planet.” (11) the  Agency is primarily interested in forcing Hellstrom to share this technology with them for use in metallurgy, the potential destructive power of the device does not seem to be a concern. Dzule Peruge the manager who eventually takes over the investigation is told by a board member “ You will inform the Chief that there must be profit in this somewhere.” (32) The Agency is painted in the most unflattering terms, once enlisted or sometimes coerced into joining, agents cannot leave. Utter secrecy about their work is required, they cannot quit, personal relationships are frowned on and children are forbidden. Upon retirement the best agents can hope for is to live out their lives in a Agency run retirement community. Peruge is an incredible misogynist and the organization incredibly mercenary, with little regard for the live of others including their own staff. Arrayed against the Agency we have another organization, Hellstrom’s Hive, while this is a hive society with a ruling council, Nils Hellstrom, the “prime male”, is very much in charge. He can call on all the resources of the hive, including a group of super scientists we meet later in the story. These “physical workers” have created technology, stun wands, advanced radio gear, nutritional additives etc. already superior to that of the Outside as the non-hive world is called. This enables hive members to potentially live hundreds of years. There are also a number of hive members working in positions of authority in the outside world, a senator, a judge, a deputy in Fosterville, the nearest town, among others, who have used their authority to protect the hive and it is this pro-hive network who has forced the Agency to work clandestinely.  Many hive members whose duties require a knowledge of the Outside are released temporarily from the hive for formal education or life experience among the Outsiders and their world. Other appear human but are mute, since the hive relies on hand signals and other non-verbal communication. The story moves quickly, the suspense is handled well as the conflict between the Agency and the hive intensifies as more agents disappear and more security organizations become involved. The tension grows and more and more details of the hive (mostly unpleasant) are revealed as we move towards what was for me a bit of a  Deus ex machina ending.

Interspersed with the action are Herbert’s signature epigrams, most are hive generated , Hellstrom’s journal entries, hive manuals, meetings of board meeting etc. However I did not find these as useful or engaging as those provided for Dune.  We learn the hive, it appears to be the only one, was founded by Trova Hellstrom in April of 1876, after 300 years among the Outsiders (47) but that is all the history Herbert provides, we don’t seem to have the same devotion to world building we see in Dune.  Trove mentions the “blessed Mendel” (48) but this does not seem to go anywhere either and Herbert’s passion for new or modified religions is not evident here.

I did enjoy Hellstrom’s Hive and anyone interested in societies modelled on insects should find it worth reading. It also provides a great look at Herbert’s creative process as a simple google search would demonstrate, more on that in the Spoilers and Quibbles section.

Herbert’s thought process in writing Hellstrom’s Hive can be seen in this quote from Wikipedia.

"David L. Wolper's quasi-documentary film The Hellstrom Chronicle, released in 1971, was the inspiration for Herbert's novel.[1] In an interview with Tim O'Reilly, Herbert stated: "I said, 'In terms of what we want now, as we think of our world now, what would be the most horrible kind of civilization you could imagine?' And then I said, 'Now I will make... [the members of that civilization] the heroes of the story, by taking negative elements of the surrounding society and treating them as the villain.' That creates a very peculiar kind of tension.”

In both goals I think Herbert was successful, to some extent the hive does fulfill the role of hero, after discussing the book with the friend who recommended it, we both agreed we found ourselves siding with Hellstrom against the Agency early on. This does create the tension Herbert talks about because you know the hive is a dangerously regimented society with no personal liberty for its members who are recycled for food when their usefulness ends. By pitting them against the Agency whose agents may be “swamped” murdered and disposed of in swamp if they prove troublesome there is little to choose from and no personal liberty on either side. The fact that the Agency is acting from a profit motive rather than a security focus also helps create the tension Herbert was seeking.

It is interesting to see Herbert’s writing is sometimes inspired by specific pre-determined goals rather than the plot alone, Damien Broderick in The Cambridge Companion to Science Fiction (51) states “The deep irony of Dune’s popular triumph, and that of its many sequels, is Herbert’s own declared intention to undermine exactly that besotted identification with the van Vogtian superman-hero.” so we can see that the same impulse was working in Dune,  Herbert treats his novels as a form of intellectual exercise . Whether this  sometimes hurts the end product depends I guess on the reader but it certainly encourages Herbert to colour outside the lines of the expected tropes now and then.

Hellestrom pays his film staff (hive members) but doesn’t collect income tax, we know where that gets you. Also certain things like the hive members wandering around the farm scantily clad or naked seem like a poor way of deflect attention.


But my main frustration is the fact that we are not provided with any extended history for the hive. With the exception of the physical workers, stunted humans with large heads that are carried from place to place or ride in little cars, similar to the man of future beloved of early SF pulps, the hive members seem distressing human. Herbert makes no attempt, I am not sure how he would do it but I would like to see an attempt, to show us the view point of a worker with a little self realization or personal autonomy. I wonder if having satisfied the conditions he set in the quote above he did not bother to devote the energy needed to develop the hive concept fully. Certainly I want to know how group that (founded?) the hive started, how this all worked. In discussing the physical workers, Hellstrom says, “ They had proved their worth countless times and were a major reason the first colonists had ended their secretive migrations.” (198) what times? what other reasons? what migrations? I want details mister!
Posted by Guy at 7:27 PM