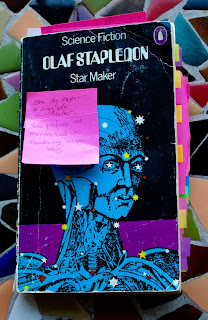 I had in the past started and not made any appreciable progress on Stapleton’s classic Star Maker. I haven’t actually finished anything by this important science fiction author, Last and First Men: A Story of the Near and Far Future had, I recall, some odd beach scene, that sent me in search of another book. But I will try it again. Odd John, oh no, not another superman. I have and will continue to avoid Sirius, because stories with dogs can be hard for me ever since watching Old Yeller or reading Where the Red Fern Grows, and even though it was not a dog The Yearling ehhh!!!! sniff.

However as part of my get reacquainted with science fiction project I brought along my dogeared, water stained Penguin edition for another kick at the can. As you can see it looks like it has been through the wringer. One nice thing about a reading copy is you can mark it up and I did. Every night before I fell asleep I read a few pages, but I have to admit as I got further into it, to the later chapters on “More Worlds”, “The Community of Worlds”, etc., the page count went up as the concepts Stapledon dispensed with a flick of the pen, versions of Dyson spheres, planetary spacecraft, a civilization of telepathic symbiotes that explore the universe and stay home at the same time, a cloud of birds that comprise an individual mind, civilizations of plant men, creatures that transmigrate through lives in a number of universes, creatures that move backwards and forwards in time depending on their moral choices, universes that were a continuous fluid, others of a “ ‘musical’ type,…, The creatures appeared to one another as complex patterns and rhythms of tonal characters.” (238) enthralled me.

My favourite part was probably "The Maker and His Works " where among the many universes, some of which I mentioned above there was a universe “ constructed as a series of concentric spheres” (240) which reminded me of Dante’s paradise.

Now I would normally try to offer a brief synopsis but after finishing the novel a quick google search took me to the following link which offers the type of review I aspire to write but have not yet produced. I will be studying it for future reference and I encourage you to look it over for more information about this title.

I also read a review of Star Maker at the SF Site reviews section and found a couple of quick quotes which aligned perfectly with my own experience of reading this book.

“In my graduate school science fiction seminar taught by the noted critic H. Bruce Franklin, Star Maker was left off the syllabus because it would take too long to read -- not because of its length, Franklin explained, but because every couple of pages you'd have to stop and think over for a while what you'd just read."

"As Kim Stanley Robinson puts it, "Every few pages contain all the material of an ordinary science fiction novel, condensed to something like prose poetry." "

For the full review see this link. https://www.sfsite.com/09a/sm88.htm

So what is Star Maker , for me it is not a novel but a journey through space and time.

The narrative is a human male who having quarrelled with his wife has gone out to a hill near his home to cool off. He begins to contemplate the stars, when after some time he realizes that he is immaterial, disembodied, his soul, mind, conscious whatever, has left his body and is capable of moving out into the universe. So off we go, after some time spent adjusting to the logistics of travel, his passage slows if he becomes emotionally upset or unfocused for example, he is finally able to locate another inhabited world. He calls it the “Other Earth”. Here he learns he is able to share the body of one of the inhabitants, to experience life as they see it. He can communicate with them and even take their consciousness with him when he leaves. This forms the pattern of Stapleton’s story. As the narrator moves he becomes part of a larger consciousness of the individuals who choose to accompany him. They may stay of a planet for a brief period or for some years. The merged entity can move through time as well as space.

It is here I felt the book dragged a bit, Stapledon uses the Other Earth as an allegory for problems within our own society. The theme, repeated through a number of the early encounters with alien civilizations, is the same but thankfully less detailed than the Other Earth section, the narrator encounters a civilization, and follows its technological and spiritual evolution through one or more crisis points.

The engrossing part of the work for me was the sheer scope of Stapledon’s imagination, ideas he tosses off in a paragraph or  few pages could be the stuff of multivolume series in today’s publishing climate. I would love to know which of my favourite science fiction writers read Star Maker and how much of an influence some of Stapleton’s ideas may have had on their work . When reading this book it is important to remember it is not really a novel. Stapledon offers no real characters and few details. The Star Maker  is all breathless scope, Stapledon can take us back to the origins of the expanding universe growing out from a single point to the end of it all.

For history or astronomy buffs Stapledon was had his science up to date.
(Georges Lemaître first noted in 1927 that an expanding universe could be traced back in time to an originating single point, scientists have built on his idea of cosmic expansion. )

One (happy) surprise for me, is that the narrative does not limit himself to our universe, for the Star Maker tinkers with multiple universes as part of it’s own emotional or spiritual growth, universes, beautiful or horrific. Universes familiar or virtually incomprehensible for the reader, useless as suggested in the earlier quote, you stop and think about what you have just read. Star Maker can be seen as a allegory or treatise on politics and culture but that sells it short, it is the scope of Stapleton’s imagination that lifts it above this, so it becomes an almost encyclopedic introduction to many of the science fiction concepts in the genre that would follow.

"Freeman Dyson was also a fan, admitting to basing his concept of Dyson spheres on a section of the book, even calling "Stapledon sphere" a better name for the idea."