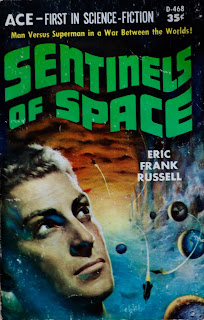 Eric Frank Russell is possibly, the science fiction author most indebted to the theories of Charles Fort for his plots. Indeed Ford’s statement, “ I think we are property", is used in Sinister Barrier, the Russell work that claimed the cover for the initial issue of John W. Campbell's pulp magazine Unknown. Certainly elements of Fort’s theories are also evident in Russell’s 1951 novel Sentinels of Space  (originally published as The Star Watchers in the Nov. 1951 issue of Startling Stories).  Space pilot Captain David Raven has been summoned before The World Council. It is obvious immediately that the Council is uncomfortable in Raven's presence and they avoid eye contact. They talk to him only long enough to tell him they have just discovered that Earth’s colonies on Mars and Venus have been responsible for a number of sabotage attacks on Earth industries and research institutions. The colonies are hoping to gain their independence. Earth does not wish to acknowledge the attacks, they feel a united solar system is needed in case they encounter aliens as they launch space expeditions further afield. Carson, the director of Earth’s Terran Security Bureau, has sifted all Earth's birth records to locate Raven, an exceptionally powerful telepath. Carson wants Raven to act as a secret agent tasked with thwarting the colonies. He meets with Raven and explains the problem in more detail. As citizens of Earth the colonists can move about Earth freely, using mutant agents to conduct the attacks. It seems that as the colonists traveled to Mars and Venus they were exposed to radiation in space. The radiation produced mutations with special powers. At present the mutants seem to be limited, each has only one power, for example telepathy, levitation, etc., there are 12 varieties in total. Raven will be sent out alone acting on his own initiative with no official status and reporting only to Carson to stop the undeclared war.

The attacks on Raven start the minute he leaves Carson’s office. Despite this, he returns home to his female companion Leina. It is obvious right away that this is not a conventional male female relationship, but then it is obvious that Raven is not simply a powerful telepath. Once he explains his role to Leina she reminds him that, “It is the unwritten law that we must never be tempted to interfere except with the prime motive of thwarting the Denebs. We might give ourselves away just sufficiently to frighten humankind…,” (19) Yes it seems that Raven and Leina are very powerful extraterrestrial observers stationed on Earth to alert their unnamed organization should an alien race called the Denebs detect the civilizations in our solar system. There are a pair of observers one male, one female on each inhabited planet. Despite the non interference directive, Raven, and Charles, the male observer, on Venus do interfere. They do this despite the objections of Leina and Charles' partner Mavis.

And so you have a fairly pedestrian SF secret agent war with the colonies drama. It is interesting that Russell uses the theme of a lone agent taking on an entire planet several times. tor.com posted several discussions of Russell’s novel Wasp the most recent can be found here.

An earlier one appears here.

I think Wasp was a better novel although overall I probably enjoyed Sentinels of Space more because of several elements I will discuss below. However there were also elements I hated. Some of the dialogue is nonsensical rubbish, in describing a colleague mentally attacked by Raven, “It was mussed something awful. His think-stuff was like freshly stirred porridge.” (33)

It is incredibly sexist, Leina and Mavis, one can assume, are equally powerful beings but apparently according to Russell’s male characters fraught with female tendencies, Charles explains to Raven that “ Mavis got a call from Leina. As usual they gabbed an hour about personal matters before Leina remembered she’d come through to tell us you were on the Fantome. It seems she’d sooner you had kept to your proper job”
“Females remain females throughout the whole of eternity,” Raven offered. (67)

Also both Raven and Charles come across as incredibly egotistical. Normally we associate the villains with monologuing but they go on forever baiting a rebel named Thorstein, because as Russell explains later, they have to really be threatened before they can defend themselves. They are also fairly callous about individual human life, although it is not an overly violent book. Fletcher Pratt, in the Saturday Review of 6 June 1953[2] wrote: Exciting semi-classic, but is this the way super-minds work?” One hopes not, and Pratt really captures my misgivings here.

So what did I like. In one scene we see Raven and Leina reclined in chairs under a glass dome in their home. They are not looking at the night sky as much as listening to the fragments of the mental traffic of their colleagues' efforts against the Deneb race spreading across the universe, “scouting warily around Bluefire, a condensing giant. Twenty black ships of destroyer types.” "repeatedly, but complete lack of common ground makes it impossible to communicate with these Flutterers.” (150) the messages point to, a vast relatively peaceful campaign against Deneb expansion and conquest.


For most of my life I have had trouble falling sleep, so in my early teens I would lie in the dark with my transistor radio listening to the world or what bits of the world I could receive, so this passage struck a real chord. I have encountered this before in my SF reading, the signals from the lost starships in Starmasters' Gambit by Gerard Klein, or when reading about the seashell (thimble) radios used by the fireman Montag’s wife Mildred in Ray Bradbury’s Fahrenheit 451. These passages in Sentinels of Space
really resonate with me. Also the ending came as a pleasant surprise, I admit one of the things I liked least about Wasp was the ending.

As a writer Russell can be a bit uneven but his story "Allamagoosa" won the short story Hugo for 1955 and his novella  "And Then There Were None" was selected by members of The Science Fiction Writers of America for inclusion in Volume IIA of The Science Fiction Hall of Fame. In his entry on Russell in Seekers of Tomorrow, Sam Moskowitz notes; “For good or bad, the astonishing bulk of Fortean phenomena and verging logically off into strange talents, stems from him. In fact, Russell virtually parodies the genre in his novel The Star Watchers …., which includes twelve mutations each enjoying a variation in special powers.” (150) My favourite mutant power here is 11, Insectivocals, and with that I am done.

(Sorry I did encounter some format issues I could not resolve in this post)
Posted by Guy at 1:41 PM